A mantel clock given to William Booth, co-founder of The Salvation Army, in 1866, was presented to General Brian Peddle at International Headquarters (IHQ) in London on 8 June. The clock has been in the keeping of the Booth family for more than 156 years and Colonel Bramwell Booth – the co-founder’s great-grandson – told the General that “the time has come for it to enter the wider confines of the Army.”

An inscribed brass plate on the front of the clock explains that it was given to ‘the Rev William Booth’ on 2 July 1866 by ‘members and friends of the East London Christian Revival Society in commemoration of his first anniversary in London’. The Christian Mission was renamed The Salvation Army in 1878.

The clock will be housed in the General’s offices at IHQ, where visitors can be inspired by a piece of Salvation Army history. A former home of De Majoor (‘the Major’) – as she was known even after being promoted to lieutenant-colonel – the building is where she sheltered and supported vulnerable people from the city centre. The new facility aims to inspire people by showing De Majoor’s life and ministry and sharing some of the vital work in which The Salvation Army is still engaged.

This is the second building to be named after De Majoor. Princess Beatrix of The Netherlands opened the Majoor Bosshardtburgh residential centre in October 2014.

Before receiving a tour of the house, the Queen unveiled a wax statue of Lieut-Colonel Bosshardt, showing her in the Salvation Army uniform, which made her instantly recognisable. Queen Máxima also spoke with several Salvation Army clients and visited the community centre on the building’s first floor. 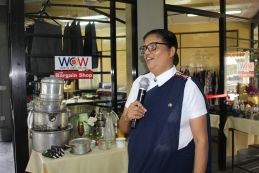 The first WOW (Women of Worth) Bargain Shop in Sri Lanka opened its doors recently with great celebration and a dedicatory prayer. Months of planning and weeks of unpacking, washing, ironing, sorting and pricing preceded the opening.

The dream behind the store is to generate income to help women’s ministries assist struggling women in the communities. This includes community classes in skills such as sewing and computers, small gardening training and start-up workshops, and a small café to provide light refreshments to passers-by.

Long-term goals include expanding the shop and the WOW brand to other areas where income generation and ministry work together.

As Sri Lanka faces difficult days, the territory asks for prayers to continue to be servants in their community. 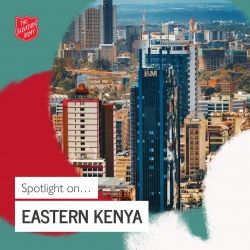 Each week, International Headquarters focuses on and prays for a particular part of the world and the Army’s work there. The spotlight has recently been on the Kenya East Territory and Indonesia.

The Kenya East Territory was formed in 2008 when the organisation’s work, dating back to 1921, was divided in two. There are more than 700 Salvation Army centres in the area. Ministry includes hygiene and sanitation programs, anti-human trafficking work, schools and children’s homes.

Join us in giving thanks to God for the amazing things being by through The Salvation Army here. Please pray over young people in our movement and upcoming events across the area. Please also pray for political stability and the church’s role in Kenya.

Indonesia has a population of more than 270 million. The Salvation Army’s work started in 1894 and now operates from more than 300 centres – worshipping and running programs. This includes youth and children’s work, social work, student hostels, medical clinics and community development projects.

Please pray for The Salvation Army here – for the learning and development of our leaders, for faith in our members and friends that is reflected in their whole lives, and over practical and administrative matters. The Salvation Army in Warsaw has kicked off a Saturday club for children, primarily those who have fled the war in Ukraine and are now refugees.

According to official statistics, more than 48 per cent of refugees from Ukraine in Poland are children. Their fathers have had to remain in Ukraine, and the children have arrived here, usually with their mothers or other family.

“We at Armia Zbawienia Warszawa decided to create a place for them where they would feel safe and for a moment forget about the horrors they have seen,” said Captain Oleg Samoilenko, Warsaw Corps Officer with Captain Dominika Domańska. “Every Saturday, the children have a great time playing board games and cooking Ukrainian pancakes together.”

More than 1100 Salvationists and friends from the USA Central Territory gathered in Milwaukee, Wisconsin, for the first in-person commissioning weekend in three years.

Commissioner Lyndon Buckingham, the Chief of the Staff, and Commissioner Bronwyn Buckingham, World Secretary for Spiritual Life Development, encouraged in their faith and service all those who gathered, as well as thousands more online.

“It’s still absolutely true,’ proclaimed the Chief, “that the most powerful tool we have in the Church for bringing people into an encounter and experience with Christ is our own story, our own testimony, our own reality of the living presence of Christ dwelling deeply within our hearts.” 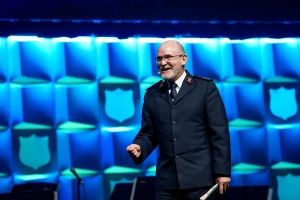 Commissioner Lyndon Buckingham, Chief of the Staff, shares his testimony during the weekend celebration.

His point was driven home by powerful personal testimonies and a video, revealing that since 2020, 56,406 people have sought Christ across the USA Central Territory.

The theme of sacrificial living continued through the commissioning and ordination of new Salvation Army officers from the Messengers of Reconciliation session of cadets.

Commissioner Bronwyn Buckingham offered words of encouragement and advice to the new officers. “Guard your hearts,” she told them, followed by a reminder that Jesus, in his public ministry, “always made time to be in the presence of his heavenly Father.”

Recognition was given to the 10th anniversary of ‘Pathway of Hope’, an initiative developed in the USA Central Territory to break the intergenerational cycle of poverty. The program has changed the lives of more than 10,000 families across the territory. There are now Pathway of Hope projects in more than 1000 locations worldwide, including in the three other USA territories, Canada, Bermuda, Spain, Portugal, Norway and Argentina.

Other causes for jubilation included a World Services Ingathering of more than US$10.2 million, the dedication to God of three summer mission teams and the introduction of a new territorial soldiers’ forum.

Topics covered included: What is worship?, types of worship, the motivations behind worship, and worship expressions. A corporate worship meeting concluded the seminar.