Lieutenant Anastasia Pomytkina fled Ukraine with her daughter, Ariana, and is now serving refugees in Moldova.

Finding hope in times of war

At the very beginning of the war, after nights in a dusty and damp bomb shelter, I realised that I would not survive with my asthma. I became worried for my little daughter and for the baby to whom I must still give birth. God said, ‘Run!’ That is how I became a refugee, leaving my husband Dima, who stayed to help people in Kyiv Mayak Corps, and my dog, Daisy.

I managed to get to Moldova, to my native Salvation Army. It took a few days for me to recover, and so too for my daughter Ariana.

Sitting back and lamenting is not for me in any situation. Ministering to my compatriots from Ukraine who have fled the horror of the warzone gives me great joy.

I experienced fear. I was cut off from my precious people. I left my home. Every morning for me was uncertain. What’s next? How long will it last? When will I return to Ukraine? Will I find what I left behind? Will I meet those whom I last saw a few months ago?

I see the same questions and the pressure of uncertainty in the eyes of my compatriots. I know how they feel, and that is why I am here on this side. I meet them, hug them, and say there is always hope: We will return and restore our country with God’s help. 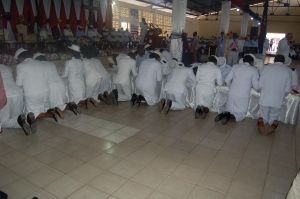 The 24 new officers sign their Officer Covenants as part of their commissioning service.

A warm and enthusiastic welcome awaited General Brian Peddle and Commissioner Rosalie Peddle as they arrived for their recent visit to the Congo (Brazzaville) Territory.

As well as commissioning the 24 cadets of the Messengers of Reconciliation session, they had opportunities to meet Salvationists and friends from across the Republic of Congo and from Gabon, part of the territory.

Highlights of the leaders’ time was the General enrolling 276 junior soldiers during the youth rally, held as part of a celebratory music festival on the Saturday night of the visit, and the following Sunday morning when he enrolled 277 senior soldiers.

The General called on the new young Salvationists to remain faithful to God, challenging them to live with confidence, consecration and courage. He also expressed his amazement and delight at the huge number of people dedicating their lives to God’s service as senior soldiers.

The international leaders also enjoyed a tour of Territorial Headquarters in Brazzaville, where they had the opportunity to speak with officers and employees. They also led two sessions of officers’ councils attended by active and retired officers from Congo and Gabon.

The Salvation Army in Bulgaria recently gave out the first edition of its new, Bulgarian-language Salvation Army magazine to people on Vitoshka – the busiest boulevard in Sofia, the nation’s capital. The distribution of this publication coincided with the ‘Day of Bulgarian Culture and Enlightenment and Slavic Literacy’. Bulgaria is part of the Eastern Europe Territory. 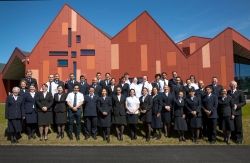 The Salvation Army in Reykjavík celebrates the visit of General and Commissioner Peddle.

In Iceland, General Peddle met with the President of Iceland Guðni Th. Jóhannesson. The Salvation Army leader in Iceland, Captain Hjördís Kristinsdóttir, also attended. The Peddles also spent time seeing the work of the Army and its spiritual, social and community programs.

As part of the visit, General Peddle enrolled 31 soldiers at the newly opened Salvation Army centre in Reykjavík, the capital of Iceland. The soldiers represent a range of countries, including Iceland, Peru, Colombia, Venezuela, Ecuador and El Salvador.

In the beautiful and remote Faroe Islands, the General and Commissioner Peddle viewed the work of The Salvation Army with youth at risk and adults facing complex life challenges.

In Norway, they met with the leader of the centre, where The Salvation Army is hosting more than 500 Ukrainians who have fled the Russian invasion.

“To say we are encouraged and inspired is an understatement because our officers and soldiers and employees have shown us the fullness of our mission,” said General Peddle of the visit. “God bless the Norway, Iceland and The Faeroes Territory.” One of the therapy dogs trained to bring comfort and relief to people in times of trauma, shock and grief.

Following the fatal mass shooting at the Robb Elementary School in the United States on 24 May, The Salvation Army of San Antonio provided much-needed support in the city of Uvalde, Texas. The attack saw 21 fatalities and at least 17 more people injured. Among those killed are 19 elementary school students aged nine and 10.

In the wake of the tragedy, The Salvation Army responded to the needs of this community. A mobile canteen was positioned at the school’s Incident Command Post. The crew served sandwiches, snacks, coffee and cold drinks to the first responders on the day of the shooting. A 24-hour response continued, as crews also provided breakfast, lunch and dinner to those responders who remained on-site.

Another Salvation Army-partnered response is a newly fostered collaboration with the non-profit organisation, Canines for Christ. Canines for Christ works with responders to provide Enhanced Supportive Care (ESC) through specialist workers and therapy dogs, offering an alternative or supplementary form of relief in times of trauma, shock and grief.

The comfort dogs were on hand as the first funerals of the children killed began.

“They have been wonderful,” said Major Carolynn Webb, incident commander for The Salvation Army in Uvalde. They are at the funerals for the children and comforting people who are attending. We are also providing the funeral homes with stuffed animals, colouring books, and the dogs are there. Please keep this community in your thoughts and prayers as they travel the long road to healing.”

Streetfootball tournament plays out in Norway Teams from around Northern Europe gather for the annual Streetfootball games.

The Salvation Army in Norway recently hosted the Norwegian Championships for Streettootball – previously known as the Homeless World Cup.

More than 400 players from across the country, from Iceland and other nearby nations, joined the tournament, which is specifically for people who are marginalised in a range of ways.

The tournament, and the projects behind it, promote participation in the community and connects people with The Salvation Army and other services. Teams from around Northern Europe gather for the annual Streetfootball games.