You are here: Home › Global Focus › Leading A War Torn Territory With Faith And Courage

Leading a war-torn territory with faith and courage Leading a war-torn territory with faith and courage

Colonels Cheralynne and Kelvin Pethybridge, leaders of the Eastern Europe Territory, say they are grateful for the prayers of people all over the world.

Australian Salvation Army officers Colonels Cheralynne and Kelvin Pethybridge are the leaders of the Eastern Europe Territory (EET). This vast area comprises the nations of Bulgaria, Georgia, Moldova, Romania and Ukraine. Others writer Simone Worthing caught up with the Pethybridges while they were on furlough back in Australia. 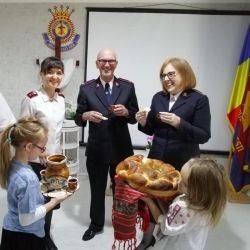 The Pethybridges enjoy a traditional Romanian welcome soon after their arrival in the Eastern Europe Territory.

Russia used to be part of the EET and is now a separate command. What relationship do you have with the country now?
KP: Russia became a separate command in 2014 and is overseen by International Headquarters. We continue to work closely together. We share the Russian language, work together on a War Cry magazine and have a strong relationship. Until recently, we also shared an IT department.
CP: All the officers know each other, and many have trained and worked together. They are friends and, in some cases, family.

What are the focus areas of the EET?
KP: In 2020, we set a five-year plan with the theme ‘Faith and Courage’, based on Joshua 1:9 and without knowing what was just around the corner. We are focusing on building strong corps, developing leaders and sustainability. It’s a grassroots mission strategy, and the crisis has focused that. We are championing Psalm 46, especially verse 10: “Be still, and know that I am God.” To do this in the midst of chaos definitely requires faith and courage. Over the past four months, we have also frequently looked at verse 1, which talks about God being our refuge and strength in times of trouble. We are grateful that all our people in Ukraine are safe and are thankful for the prayers of people all over the world for this.

Can you describe what it’s like to live knowing that fighting is going on just a few hundred kilometres away?
CP: The day after Russian forces crossed into Ukraine, we went to pick up our permits to live in Chisinau. We were confronted by rooms full of people, young families, all trying to leave, to get as far away as possible. It was confronting and surreal, and we just went and had a coffee [to discuss what to do next]. We were wanting to do something ... and we continue to respond today.
KP: In other ways, life is normal, but yes, surreal. There is a sense that this could go on for some time, and the longer it goes, the more normal it can seem. It’s not like in Ukraine where our officers and people are working, serving others, and then sirens go off, and they dive into bomb shelters. When the immediate danger is over, they come out and resume what they were doing. It’s a different world. We just want them to look after themselves too and stay safe.
CP: The Ukrainians in the corps and centres are our heroes – they continue doing children’s ministry, Bible studies, worship, holiday clubs – as well as looking after many internally displaced and traumatised people. Officers around the world have been galvanised to support and help their Ukrainian brothers and sisters in whatever way they can. 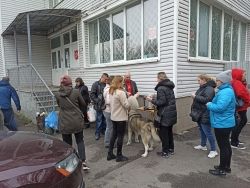 Corps throughout the Eastern Europe Territory are assisting locals in need, refugees and displaced people.

How is The Salvation Army in Europe responding to the crisis?
KP: There are many stories online available in Salvation Army publications that outline this. Food and other products are distributed to refugees throughout the EET. In Moldova, corps have turned buildings into accommodation to help facilitate the constant flow of people coming in and out. Over 100,000 people have stayed in Moldova. We give out vouchers, mainly for children who are so disadvantaged in this crisis. We have eight motel rooms in our THQ, and different refugees have been living there. We are trying to find more permanent solutions for them. In Romania, our teams have left border areas and are now at Romexpo in the capital, Bucharest, assisting with vouchers, caring for children who need some sort of normality, anti-human trafficking work, and other social and spiritual outreach. In Georgia, Ukrainian refugees are staying mainly in the town of Batumi on the Black Sea and the capital, Tbilisi. A restaurant in Batumi is feeding Ukrainian refugees every day. In Bulgaria, teams are in the capital, Sofia, and on the border, caring for the refugees still coming in.

How is the EET managing financially with the huge influx of refugees?
KP: Money has come in from around the world, mainly through The Salvation Army World Service Organisation (SAWSO) and channelled through IHQ to the EET. So far, the territory has given out more than AUD$4.5 million in four months – some into Ukraine directly, some into other countries supporting refugees. Some other major Army contributors are the USA, Norway, Sweden, UK, Switzerland, Netherlands and Australia.
CP: There is a taskforce set up to look at the future of Ukraine in the long term. Their work will focus on looking to the future and what to do to restore normality. We are praying our existing corps will still be in operation. Some, such as the Donetsk Corps that is still operating – and enrolling soldiers – may have to locate. We don’t know how the future will look and will be praying to continue the ministry and look for new opportunities. 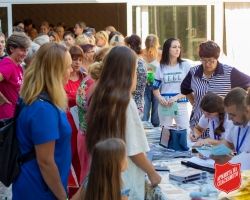 How has the crisis impacted you both personally?
CP: It is frustrating that we can’t do more and not being able to do what we would like to do. It’s also been hard on our family back home. We know what they are seeing and reading, and it’s challenging. This is all new ground, too, for The Salvation Army, and we feel the responsibility as leaders.
KP: It has been unsettling in ourselves. Because you’re not local, you feel the pain of the people and care for them in their pain, but know you’re not local, and they know that too. That has been challenging.

With everything you face, what motivates you to get up each morning and keep going?
CP: Knowing we have people on the frontline doing amazing things. We are there to support them in that, through active prayer and practical help. We are a conduit for what we can get them access to. Also experiencing God’s perfect timing in this. With COVID-19, the crisis and everything, so much has happened at just the right time. Expat officers who can access resources the Ukrainian officers need, the arrival and expertise of Australian Major Elizabeth Garland, who specialises in project and development, and prayer support from Salvationists and Christians around the world – these have been an incredible blessing at some of the darkest times.
KP: A sense of what we can do can help those on the frontline make a difference. God has placed this work in their lap. It’s a faith thing. We tell them that if they don’t have the resources they need, just do what they need to do, and we will work out the funds. It’s a challenge, but we desire to make the resources available to them to do the work. God has placed them, with their language and culture, here, and they are in the best place with incredible opportunities in the palm of their hand. How can we provide what they need to be the hands and face of Christ in this situation?

What are some of the greatest rewards of your international service?
KP: Seeing the sea of prayer that has gone around the world and the messages of support for the officers and people of Ukraine. Cards and messages come all the time, and the level of support is amazing. This is even more important as the media moves on around the world. We can’t accept this as normal. People in Ukraine are not living normal lives.
CP: Seeing photos of people in Ukraine receiving those messages and realising the difference it makes. Support from youth, Home League, so many around the world. Amazing.

How can people here in Australia help the work you do?
KP: First and foremost, pray – for peace, for strength and courage, and for protection, for officers and soldiers. Financial support can also be given via SAWSO.
CP: Pray and financial support – it is overwhelming, and we are so thankful.

To donate to The Salvation Army in Ukraine and those supporting refugees, go to: bit.ly/3OgWHAB