Jersey artist Jacques Le Breton and his completed mural of artwork drawn by Year 6 students at three schools, depicting The Salvation Army as a church and charity.

Primary school students on the tiny British island of Jersey, in the Channel Islands just off the coast of France, have had a real-life lesson on what The Salvation Army is as a movement and helped beautify the town in the process.

Emily Smith, the Army’s community centre manager in Jersey, said Year 6 students from three Jersey schools were invited to draw images of what they understood the Army to be and that work was recreated onto a giant mural at a new apartment complex being constructed by developer Le Masurier in the heart of St Helier in the island’s south-east. 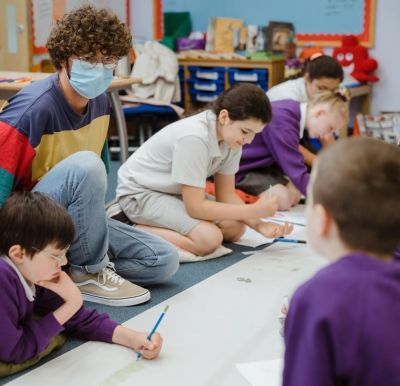 Artist Jacques Le Breton gives students advice on their drawings for a mural on hoardings around an apartment development under construction in Jersey.

Jersey artist Jacques Le Breton painted the students’ designs onto the hoardings, which had been put up around the Merchants Square development.

“I approached the development company and asked if we could use the hoardings to create some artwork and spread the message about what we do, to which they agreed,” Emily said. “I then went into three local schools – Rouge Boullion, Grand Vaux and Springfield – and spoke to them about what we do. I focused on three areas, and each school had a different topic. These were the cafe and our free soup, the charity shop and the church and community work we do.”

The students created artwork based on the area they had learnt about. “Each of the designs created captures the work we do perfectly,” Emily said.

Jacques created a final mural by copying the students’ artwork “so the piece looks like it has been completed by the pupils”. The students were able to be part of the final piece, too. The Salvation Army community centre manager in Jersey, Emily Smith, looks on as students bring their images to life.

“While Jacques was working on the mural, we invited two pupils down from each school to paint directly onto the hoardings,” Emily said. “Jacques got involved because I worked with him on another project involving schools. He is really well known in Jersey and does lots of work with local school children.”

Emily said the Army’s Minden Street building was “around the corner” from where the Merchants Square complex is being constructed.

“Our location in Jersey isn’t the best. We are tucked away behind a carpark,” Emily said, which made for a great opportunity to create more public awareness of the Army by using the blank hoardings.

Le Masurier Managing Director Brian McCarthy said the mural had enabled the Army to educate people on the “amazing community work” it does in “a really creative and colourful way”.

Emily said it had been a “fantastic project” that had been fully supported by Le Masurier, which not only paid for all the materials needed to complete the mural but donated £300 (about $A550) to each school.

“It has been fantastic to work with local schoolchildren, spread our message and have such a brilliant piece of artwork on a busy street in St Helier.

The mural will remain until the hoardings are removed.