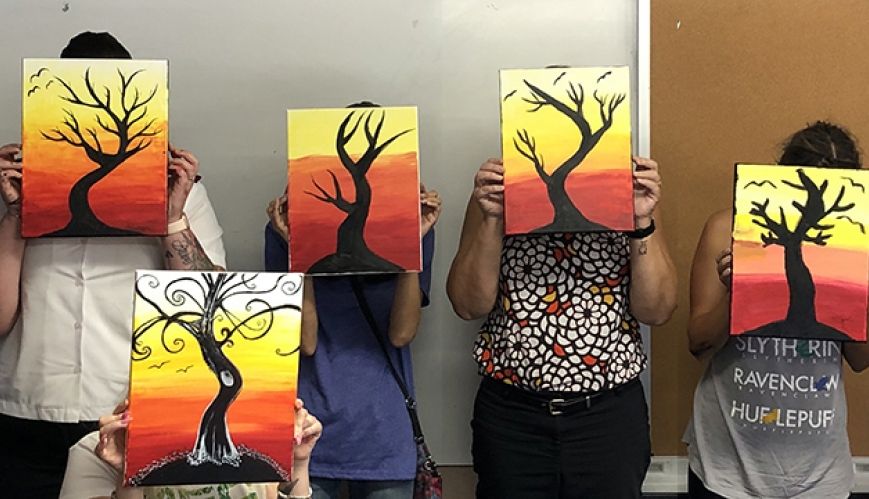 Painting a new life: Some of the victims of human trafficking in Las Vegas show some of the pieces they have produced in art classes held at their Army-run safe house.

The Salvation Army Southern Nevada has opened two safe houses for the victims of human trafficking and added an additional case manager for its SEEDS of Hope (SOH) program.

The houses have been fully renovated and new furniture and appliances installed.

Captain Lisa Barnes, Corps Officer at Clark County, said 10-15 victims would be supported initially in the houses alongside the other 25 victims being supported by the program with ongoing case support and management.

Lisa said the initiative was funded mostly from a grant given by the MGM Resorts Foundation which, each year, gives a donation from its Community Grand Fund to not-for-profit organisations across Southern Nevada, Michigan, metropolitan Washington DC and Mississippi.

SOH program director Erin Kauffman said Las Vegas had been identified having a widespread issue with trafficking into Nevada of children for commercial sex – not only from within the US – and the “transient nature of the Las Vegas community further exacerbates the issue along with the high rate of teen homelessness, high school dropout rates and teen pregnancy”.

“Some of the circumstances that make Las Vegas a prime target area for trafficking are the fact that it is a natural destination for prostitution-related industry,” Erin said.

She said the incidents of human trafficking increase during major sporting events, conventions and anywhere there is a major influx of tourists.

“The problem is that the majority of individuals involved in the commercial sex industry are not there willingly,” Erin said. Traffickers set a daily quota and if that daily quota is not met the victims face sexual assault, beatings and threats to their families.

“Victims of human trafficking are victims of many different crimes including domestic violence and sexual assault but have an added victimisation of being sold for money. They are modern day slaves who struggle with getting away from a lifestyle that encompasses addiction to drugs and alcohol as well as money,” she said.

The SOH program has provided specialised services to victims of human trafficking for about 10 years in Clark County and works collaboratively with the Southern Nevada Human Trafficking Task Force to provide education and public awareness to schools, parents, hotel staff and the faith community to help identify and prevent human trafficking.

Erin said the Polaris Projects National Human Trafficking Hotline was ranked seventh in the US in 2018 for calls while the Las Vegas Metropolitan Police Department’s VICE division said sex trafficking victims were on the rise but accurate figures were not possible due to many victims being too scared to report their situation.

She said many of the victims who manage to escape their situations struggle for years to overcome the “stigmatising labels” society placed on them which often prevented them from moving forward with their lives.

Though less recognised, Erin said labour trafficking in Las Vegas was rife: “Most are brought by traffickers from other countries to work as domestic servants, restaurant workers, landscapers and in non-regulated industries. They suffer similar trauma symptoms to sex trafficking victims but have additional barriers including cultural and language barriers.”

The Army has been running four safe houses in the city until recently but that number jumped to eight with many clubs and the industry as a whole shutting down due to the COVID-19 pandemic. Erin said the safe houses were about 1km apart and in “secret locations”.

“We know how important it is to keep our program participants safe. When some leave their exploiters, they are in physical danger. We are committed to healing, hope, and safety for all of them,” Erin said.

SOH, which began in 2006 is a corps-based initiative and provides 24-hour-a-day crisis intervention services. A caseworker was employed a month ago to assist Erin in meeting the needs of the victims of human trafficking. It is the lead victim service provider on the Southern Nevada Human Trafficking Task Force working with law enforcement and prosecutors and other social service and non-profit agencies.

Erin said the clients, who ranged in age from 22-55, lived alone in the apartments but found they missed companionship so classes and support groups were introduced as well as employing the caseworker.

She said all the current clients were women from many different ethnic backgrounds but had housed a male client once.

“This is a relatively new model, with the intensive and intentional program, transitional care and aftercare but, if we can work with a (client) for two years, 80percent become survivors,” Erin said. “Many of the women come to faith.”

A before and after picture of the pallets being turned into garden furniture by residents and staff of safe houses in England.

Meanwhile, in the Army’s United Kingdom with the Republic of Ireland Territory East Midlands area in central England, residents and staff of safe houses for the victims of trafficking have found a creative way to keep busy during the COVID-19 lockdown.

The survivors, all men aged between 21 and 55, have been transforming timber pallets into picnic benches and garden chairs, which they hope to put to good use when the weather gets warmer.

Christine Papworth, the Army’s modern slavery service manager, making the outdoor furniture was part of a wider garden project taking place at the safe house which includes the making of flower boxes and a garden path so that residents can easily access a quiet outdoor space. Sewing classes would begin soon to teach the clients how to make cushions for the outdoor seating.