You are here: Home › Global Focus › Out Of Syria The Salvation Army Provides Practical Support For Refugees In Germany

Out of Syria: The Salvation Army provides practical support for refugees in Germany Out of Syria: The Salvation Army provides practical support for refugees in Germany

German language classes are a major focus area in The Salvation Army's ministry to refugees. Above, Auxiliary Captain Rosemarie Scharf shows one of the booklets the teachers have developed themselves.

As 2016 came to a close, the world watched with horror as a devastating siege took hold of Aleppo, once the largest city in Syria, now a battleground between government forces and rebel groups.

For the past five years, scenes such as these have played on screens around the world, making the Syrian civil war and the resulting refugee crisis a reality that cannot be ignored.

That crisis has rippled outward, as nearly five million Syrians have fled their country, searching for safety. Many of them have found a home in Europe, where The Salvation Army is providing assistance across the continent.

Difficult journey
In the Germany, Lithuania and Poland Territory, caring for refugees has become an integral part of The Salvation Army’s ministry.

In the city of Leipzig, the Army is providing accommodation for refugees. About a dozen people live in apartments attached to the corps, including Abed Hilani and Moufak Alsadat. Like many others, Hilani and Alsadat arrived in Europe in an inflatable boat, and then travelled through Greece, Macedonia, Serbia, Hungary and Austria to get to Germany.

“It was a difficult and terrible journey,” says Alsadat, “but as soon as you arrive in Germany, you can feel serenity and calm.” 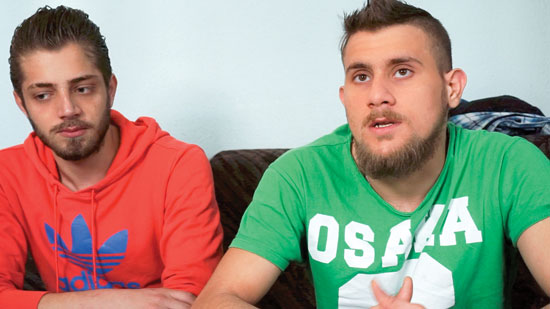 For Hilani, the help he has received from the Army has made the transition to life in Germany much smoother.

“They help us to learn the language, education and different types of services,” Hilani says. “Everything we need could be found here in Germany.”

The Leipzig Corps also supports refugees through its thrift store and household wares store, which offers furniture, electronics and other household items at low prices. The construction and operation of this store, which is housed in a temporary tent-like structure, was sponsored by the Canada and Bermuda Territory.

More than just customers, many of the store’s volunteers are refugees.

“Although The Salvation Army was helping them, they didn’t want to be taking and not giving,” says Major Brenda Murray, Director of World Missions, who visited the facility last year.

Major Murray had the opportunity to speak to some of the volunteers as they loaded and unloaded trucks coming into the facility. “They told us how much they enjoyed doing what they were doing. They were happy, like they were having fun.”

Challenges ahead
Not far from Leipzig, in the city of Naumburg, The Salvation Army has an apartment that houses refugees and offers a drop-in program for refugee women and children. This program provides tea, coffee, snacks, games for children and an opportunity to practise German and receive support, from both The Salvation Army and their peers.

Visiting the program gave Major Karen Lemke, World Missions Financial Coordinator, insight into the challenges many refugees are facing. “I spoke to one woman with school-aged children,” she recalls. “Some of her family was in Turkey, some were in Germany, and some were elsewhere – they were trying to find a way to get everybody back together again. Meanwhile, she had been living in Germany for months and still hadn’t been able to get into German classes, or get all the ID cards that she needed.”

The Army also has a thriving ministry in Dresden, which received a massive influx of refugees in the fall of 2015, prompting the city to contact The Salvation Army and ask if they could operate an emergency shelter. Lieutenant Gert Scharf and Aux-Captain Rosi Scharf answered the call, accommodating 40 refugees in a school gym. With the Army’s assistance, all of these men had housing just three weeks later. A church with 25 members, Dresden Corps maintains strong relationships with about a dozen refugees, including several families.

Much of the practical assistance they provide is administrative, helping them navigate the immigration system and find jobs. “It’s very difficult for them because they’re not allowed to work until their application is positively answered,” says Lieut Scharf.

From this practical assistance, the corps has also established and developed a sustainable integration ministry, which now includes German language lessons. “After being accepted as a refugee, everyone has to leave the transition homes, shelters or apartments and find their own accommodation, which is almost impossible without speaking German,” says Lieut Scharf.

“We have helped 80 per cent of the refugees we have met to find their own apartments. We have also employed a Salvationist social worker who focuses on refugee affairs and is particularly skilled with complicated situations and consulting with the various services in public administration that refugees need.”

Making the transition
The German language classes are designed to help the refugees learn what they need to operate in German society on a daily basis.

“The Federal Migration Agency (FMA) requires academic courses, but these are too difficult for certain groups such as rural Afghans or women in general, many of whom are many illiterate,” explains Lieut Scharf. “We have courses for different levels of knowledge and abilities, including classes that do not require any previous knowledge. Mothers can also bring their children, and there is childcare available. Advanced classes, extra tuition and private lessons are available for those preparing for the FMA courses, or to get a job in their profession in Germany. Except for the social worker, our personnel are volunteers. One of the small German classes at the Dresden Corps, helping Syrian refugees learn the language.

“At the moment we have 40 students and on Mondays, the corps is packed with happy and grateful people, learning our terribly complicated language. It is amazing to see people learning a foreign language – writing, reading and speaking – who were illiterate in their homeland, especially women. People are developing their self-esteem and are more confident in their job seeking. It is difficult though, and often an exhausting long distance run!

“Relationships have been established, eliminating cultural and faith barriers. The refugees are getting a new perspective on Christianity, are starting to read and ask questions about the Bible and even attend some of our meetings.”

The Salvation Army charity shop is also well-known to refugees, with 40 per cent of clients having a refugee background – that’s 600 people per month. Almost half of the 600 emergency food parcels are given to asylum seekers. Friendships with Syrian refugees is the key to helping them settle in and build a new life in Germany.

“The key to the Army’s ministry to refugees is not programs or practical assistance, says Lieut Scharf. “The most important thing is to be friends to them.”

This article first appeared at salvationist.ca/2017/02/syrian-refugees-germany/ on 17 February. A video showing more of Germany’s work with refugees is available at this link.

Additional information has been added to this article.