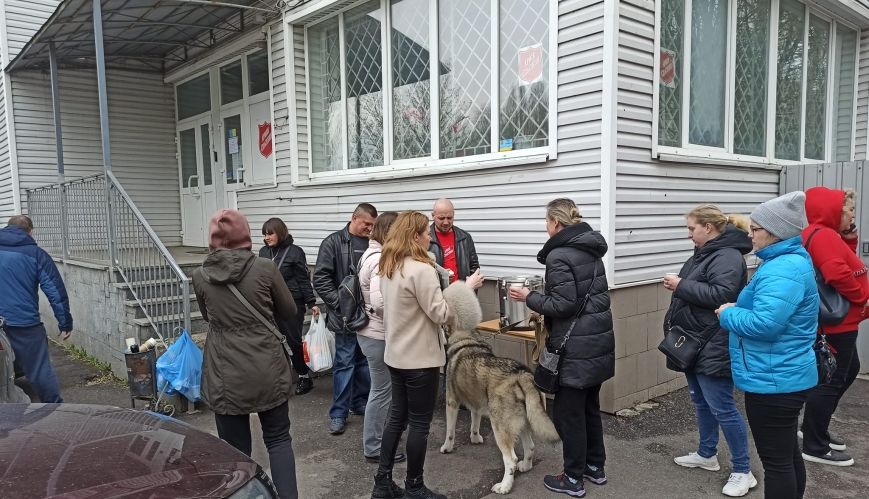 Salvos teams at the Kropivnitsky Corps, Ukraine, are assisting those displaced by the Russian invasion.

The Salvation Army across Europe continues to respond to the needs of Ukrainian refugees who have fled the Russian conflict by providing food, hygiene, practical advice and spiritual care to all those in need.

In Ukraine, teams are providing relief such as food, hot drinks, drinking water and other non-food items to internally displaced people in various locations. Cities like Lviv, near the border with Poland, receive many displaced people, and the Salvos have been able to transport goods to three corps there.

The Salvos in Bulgaria assist refugees with food packages.

The Eastern Europe Territory and International Headquarters (IHQ) International Emergency Services (IES) are in daily contact with corps officers in Lviv. There are also plans to implement a ‘care for the carers’ package to support all responders with additional spiritual care. Officers remain largely in their corps locations and serve where they are appointed. Female officers and children were given the opportunity to evacuate to Moldova, but most decided to stay.

In Dnipro, The Salvation Army provides sweet pies and has distributed them to displaced people. It has also distributed more than 100 pieces of survival equipment – supplied by the Red Cross – to displaced people at the train station every day. In Lviv, The Salvation Army stocked-up other supplies and shared contact details on social media to enable displaced people to get in touch and receive the most essential items. Both urgently needed food and non-food items have been transported to Ukraine via Poland. Additional trips are planned.

The Eastern Europe Territory has also developed posters and flyers in a variety of languages which are now in use in all locations as part of its anti-human trafficking work.

In the Federal Asylum Centre in Switzerland, The Salvation Army – together with Caritas – continues to operate a placement service for qualifying displaced people. More than 1000 people have been placed using this system so far.

The operation of the Initial Reception Centre in Switzerland, with a capacity of 500 in the civil defence facility ‘Allmend’, is now entirely managed by The Salvation Army and four other short-term shelters for approximately 280 people. A fifth shelter is being planned with capacity for some 150 people. The largest shelter, with a capacity for 1000 rooms, has been established in a container village in Bern.

The Hope clothing drop-off centre in Zurich has opened, and 453 vouchers have been utilised, with each voucher allowing a person to collect 10 items of clothing.

The crisis has also impacted neighbouring host countries such as Hungary, Moldova, Poland and Romania. The Salvation Army’s Switzerland, Austria and Hungary Territory is supporting the Hungary Region in the response both with personnel from within the territory and basic relief items. 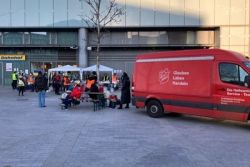 Salvationists from the Berlin South-West Corps welcome refugees from Ukraine.

In Budapest, 22 sites were made available for the reception of refugees. The corps officers in Debrecen and Miskolc have also been mobilised to support work at different border posts.

More than 500,000 refugees have crossed the border into Hungary, with countless volunteers helping to provide for people in need. Fifty-two pallets of relief supplies have arrived from The Salvation Army in Switzerland, while personnel have travelled almost 9000 kilometres and spent 1,500 hours in recent weeks helping Ukrainian refugees in Hungary.

In partnership with the local government, Ungheni Corps in Moldova is providing daily refugee services for Ukrainian women and children. The facility has some 90 private rooms with access to kitchens. The Salvos are providing clothing, food, laundry services, and emotional and spiritual care. In addition to community rooms and an outdoor playground, there is a classroom program for Russian-speaking children to continue their education.

The Salvos in Moldova also provide free assistance to refugees from Ukraine, including temporary accommodation, hot meals and drinks and access to Wi-Fi.

Other host countries have also offered sanctuary and support. These include Austria, where The Salvation Army is networking with partner organisations to help those who have escaped from the war zone.

The Denmark Territory is preparing a project in Tønder, a town on the German border. The territory has a current project for disadvantaged families, and many Ukrainians have been seeking assistance.

In Le Havre, north-western France, The Salvation Army is officially responsible for the social support of Ukrainian refugees, both in the first emergency reception centres and in more permanent accommodation. This is either with private individuals or in accommodation made available by local authorities. 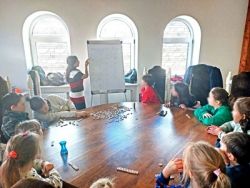 At the Klaipeda Corps in Lithuania, a teacher provides English lessons for Ukrainian children.

In April, Greece launched The Meeting Point project to assist new arrivals from Ukraine. Based at Athens Corps, it provides practical and essential material needs, assistance and a pathway for meaningful integration. The Greek Salvation Army has also provided mobile phone sim cards and supermarket vouchers.

Latvia has provided food, water and bedding to refugees arriving from Ukraine. In Lithuania, many existing children’s activities have been expanded to include refugee children.

In late March, The Salvation Army took responsibility for one of Norway´s largest refugee emergency accommodation centres. ‘Kongsberg akuttmottak’ will house 700 Ukrainian refugees for two to three months at a time before they are offered permanent housing in the municipalities. The centre offers four meals a day, health services, activities for small children, and primary and elementary school teaching in cooperation with the town authorities.

The Salvation Army in Spain has contacted the government to offer its resources, including the provision of food and temporary accommodation in Denia and Coruña.

In the Netherland, the Salvos are providing support to families hosting Ukrainian refugees and are managing several temporary shelter locations, including on cruise ships made available for this purpose.