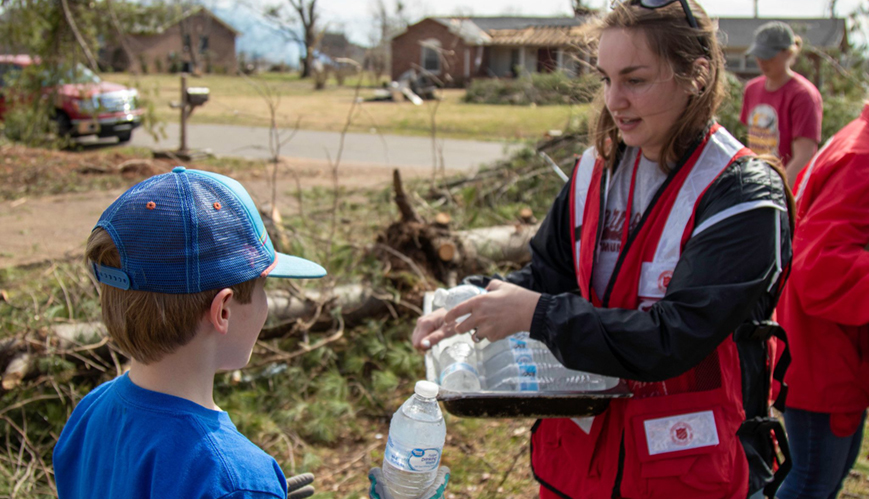 A Salvation Army volunteer hands water to a young boy who is clearing property after tornadoes struck his hometown near Nashville, Tennessee. Photo courtesy The Salvation Army - Nashville.

The Salvation Army is continuing to assist people affected by two tornadoes that struck the US city of Nashville and its surrounds on 3 March.

The wind funnels left a near 100km path of destruction through the region, killing at 25 people, injuring many more and leaving hundreds of people homeless.

Salvation Army disaster relief teams were among the first responders and set up mobile kitchens and roving support across seven areas in the region. As of 13 March, more than 6239 meals were dispensed, along with 9255 snacks and 7177 beverages. Staff and volunteers have also provided personal and prayer support to 1377 people. As cleaning and rebuilding efforts continue, The Salvation Army has now moved to the recovery phase.

“The Salvation Army stays in a disaster until the need is met, and at this time, the need for mobile and fixed feeding sites is coming to an end,” said Major Stephen Story, Incident Commander for Tennessee.

“We will now focus our efforts on continuing long-term recovery discussions and planning alongside our county and city partners. And, as always, we will continue to serve our communities with the services we have been providing for 130 years in Middle Tennessee.”