You are here: Home › Global Focus › The General Calls For Prayer For Australia

The General calls for prayer for Australia The General calls for prayer for Australia

General Brian Peddle has urged the international Salvation Army to pray for Australia.

As the bushfire crisis continues to escalate across Australia, General Brian Peddle has called for prayer while Salvation Army Emergency Services (SAES) crews, Salvationists and volunteers continue to support thousands of evacuees and firefighters.

“Pray for The Salvation Army as it seeks to respond in the best way possible. Pray for the government of Australia – for wisdom and compassion as it finds the best way to respond to the current crisis and put plans in place for the necessary recovery work.” 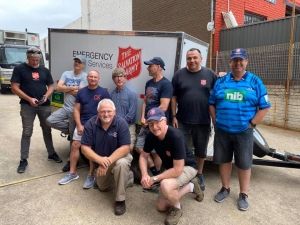 A Salvation Army Emergency Services team from New Zealand has arrived to assist with the Australia Territory’s bushfire response.

To date, The Salvation Army has been called out to 135 official operations. This includes serving at 160 evacuation centres across the country. SAES and corps teams on the ground have served over 123,000 meals and 112,000 light refreshments.

The Salvation Army in Australia has in excess of 3000 volunteers working between four to eight-hour shifts to support emergency response and recovery efforts, with teams being brought in from outside the fire zones and even a team from New Zealand assisting.

Salvos wishing to volunteer with The Salvation Army Emergency Services should speak to their corps officer or send a private message to The Salvation Army Strategic Emergency and Disaster Management Australia Facebook page. Please note that during times of peak emergency activity, it may take some time for the SAES to be in touch.