The Salvation Army's new interactive online timeline tells the movement's history and shows its ongoing and pioneering ministry around the world today.

The history of The Salvation Army stretches back more than 150 years and – though full of colourful characters, inspiring stories of commitment to God and wonderful, fresh expressions of ministry – it can sometimes be challenging to tell its story in a way that captivates a wide audience and communicates the depth of this legacy.

Our objective when refreshing the part of the International Headquarters (IHQ) website (salvationarmy.org) that tells the Army’s history, therefore, was to join up the heritage with the contemporary.

We – the IHQ Communications team – knew that many people viewing the content would have a limited knowledge of the modern-day Salvation Army, and so we saw an opportunity. We wanted to make it clear to our audiences that the best days of the Army are not behind us; rather, that it is still involved in a pioneering, relevant ministry as much as it has ever been.

We also wanted to make sure that our motivation was clear throughout – The Salvation Army is driven by a love for God and a compulsion to put the gospel message into action. With these things in mind, it was decided that a thematic approach would work well, looking at how some of the specific strands of Army ministry developed, such as music, social work and young people’s work.

We made use of an online platform called Shorthand, which aids in the creation of ‘immersive’ online stories. Through this, we are able to put large images and videos front and centre. This in turn demanded – alongside completely new text – the sourcing of fresh photos.

We are grateful to colleagues around the world, especially the International Heritage Centre (based at the UK Territory with the Republic of Ireland’s William Booth College), for their help in this project.

To me, there are two ways to approach the site: as a general walk-through of our history, or to examine a specific area of our work. 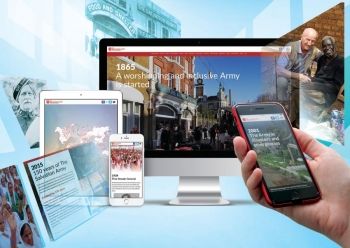 As a longform article, the site is easy to use – and readers may find they learn unexpected things, even if they know the Army well! Scrolling down the page (the site is compatible with mobile devices and tablets, so this can easily be done on those too) will take you through the past century and a half chronologically and thematically.

This would be ideal for a newcomer to the Army, or for somebody more involved in its work but less familiar with its story.

As you scroll, you’ll come across large, full-screen images and videos that illustrate the theme at hand. These are intended to bring the words to life and show the true range of expression in the Army.

For the intro, we spent time creating a time-lapse of the 14-year-old International Headquarters building in central London. We think this shows a modern setting to our movement before the next section takes the viewer immediately back to the location of the beginning of the Army’s story.

In the ‘Music’ section, the illustration through photos and video shows the breadth of this ministry: choirs, brass bands, woodwind, gospel groups and more.

We use full-screen images within the ‘International’ section. Here, different countries of the world ‘light up’ as the user scrolls, indicating the 10-year period in which the Army first began its work there. 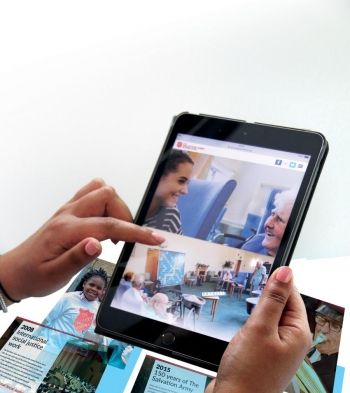 The timeline is available on a range of devices.

I am not aware of the Army’s growth being represented in this way previously, and to me it serves as an important reminder of the global family of Christ that we are a part of, and how diverse our ministry must be to be relevant.

Video is an important part of the project, and the ability for the reader to be able to watch this without leaving the page is important in making it integral to the story. We were keen to use personal testimony where possible, and Devonte Thompson’s ‘Camp Story’, for example, really gets to the heart of why we work with young people.

The second way to use the site, via the navigation menu, is to head straight to an individual section. This would be useful for somebody interested in a particular ministry of the Army – who wants to find out when it began and why, for instance, or to investigate a theme they wish to understand more about.

Someone interested in female leadership in The Salvation Army is able to select ‘Women’ from the menu and be taken directly to that section. There they will learn about the vital role of Catherine Booth in the formation of the organisation, see an archive photo of former General Evangeline Booth, understand more about Women’s Ministries groups across the world and even view a video about a New Zealand officer’s journey into full-time ministry.

One of the most moving aspects of the project for me was in researching The Salvation Army’s response to the 2001 attacks on the World Trade Center in New York City. Though I was aware of these efforts, seeing it afresh through video of and quotations from those involved was powerful.

Being able to place these and others prominently on the page is incredibly useful in bringing the story alive.

We are keen for Salvationists and friends to share this new resource with family, neighbours and colleagues who are interested in the work of The Salvation Army.

We believe it could serve as a useful ‘digital’ conversation starter – a way that people for whom The Salvation Army is their church can explain where we go on a Sunday, or why we do our voluntary work.

Who could imagine the discussion that might result from a simple sharing of the site on social media?

The last section of the site is called ‘Today: What is your place in the story?’

‘The mission remains the same as in 1865’, we conclude, and ask the reader the question: ‘What role will you play in the next part of The Salvation Army’s history?’

This sums up our aim throughout this project – to look forward as much as we look to the past.

We hope you find the new resource useful in reflecting upon the Army’s God-led history and inspiring you now and in the future.

View the timeline at story.salvationarmy.org

This story first appeared in the April-June 2019 edition of The Salvation Army's magazine, All the World.