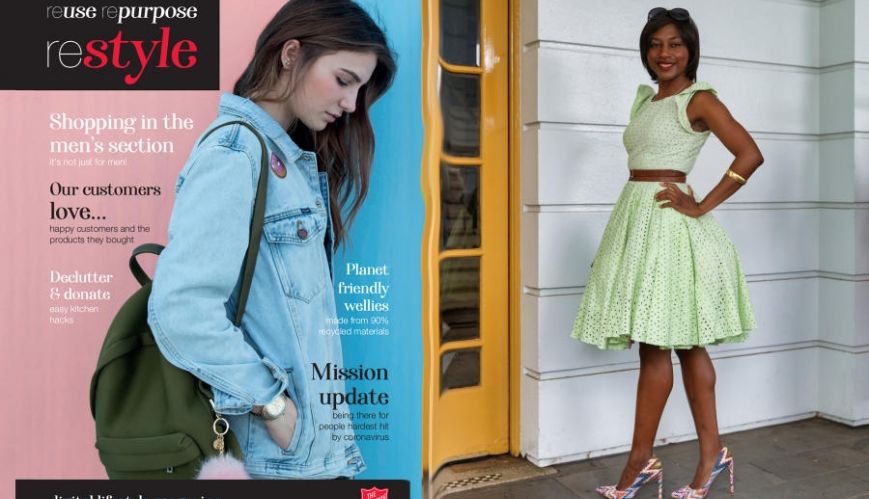 The front cover of a new magazine produced by The Salvation Army in England to promote good use of items sold in its charity shops. Nina Gbor (left) is one of the bloggers who contributed to the first issue and is wearing a dress bought in an Army store in England. The clothes were bought about five years ago in Melbourne, where Nina now lives.

For The Salvation Army United Kingdom and Republic of Ireland Territory, there was no better time to launch an online recycle magazine than to coincide with international not-for-profit charity Oxfam’s 'Second-Hand September' campaign.

Digital editor Andreea Dumitru said the magazine came about in response to the COVID-19 pandemic, which had forced the closure of Army’s second-hand shopfronts around the territory. Territorial Communications Manager Kelly Castelete, who came up with the magazine idea, said that the moment the shops were allowed to reopen in August, the magazine was launched.

“The idea was to celebrate all the positive things about charity shopping, give people reasons to visit our shops and promote the key things our business is well known for – value for money, reuse and recycling, community and helping others,” Kelly said.

Andreea said while the shops were gradually being reopened across the territory the digital magazine would continue to “enhance the shopping experience”.

She said the magazine, which is to be produced twice a year, would be filled with “fabulous fashion finds”, tips about styling, decluttering and “do it yourself” projects using the “brilliant bargains and hidden treasures” that filled its shops.

“There has never been a better year to take part in Second-Hand September, as many have used lockdown to clear out wardrobes, bookshelves and crockery cupboards,” Andreea said.

Kelly said while it is planned the magazine would be published twice a year, “we will measure reach from the first edition and take it from there”.

Andreea made approaches to the bloggers to contribute to the magazine. One of those bloggers was Nina Gbor, who lived in Bristol for 10 years but now lives in Melbourne. She founded the sustainable fashion platform Eco Styles, which Nina said was about “ethical fashion, personal styling and environmental sustainability”.

“My work is about personal style and sustainability. You can dress and feel fabulous while being sustainable in the process,” Nina said. “I enjoy crushing the stereotype that sustainability compromises beauty. I never follow fashion trends. I’ve always created my own personal style through mixing vintage, retro and contemporary pieces. I hunt for unusual pieces that stop me in my tracks.”

Nina said it was “super sweet” for her contribution to be used in the first issue of the magazine, which carries a photograph of her wearing a mint vintage dress that she said was her favourite piece bought from an Army shop in the UK.

“I was aware of the wonderful work of The Salvation Army as a child growing up in the United States (but), in the United Kingdom, I found a vast range of beautiful, eclectic fashion pieces at (its) charity shops. I still have all of those outfits today,” Nina said.

She said what was most memorable about shopping in the Army’s stores was the volunteers and staff: “They were constantly warm, really sweet and made you always want to pop in just to say hello. It’s the hallmark of what a community centre and charity shop should be.”

Nina was born in Africa but her parents moved to the United States when she was a baby. She moved to Bristol from Bloomington, Indiana, to study, but decided to move to Australia to “build the life that I wanted and the career that I wanted.”

She said her love of fashion and style came from her childhood. “We’d watch old movies like Wizard of Oz or Gone with the Wind. My biggest inspiration is Audrey Hepburn.

In Australia, Salvos Stores has a website that promotes buying its online catalogue or instore but not in a specific magazine format that gives handy hints on how to use the goods and what items are in vogue. That site is https://www.salvosstores.com.au/stories/recycle-reuse/

Salvos Stores’ Community Engagement Manager Graeme Hallett said there were more than 335 retail Salvos Stores across Australia and about 200 Family Stores, which are run by individual corps.

Depending on COVID-19 restrictions, Graeme said several new stores would be opening around the country in the coming months.

Oxfam, which has supported reusing and reselling since the 1940s when its first shop opened, says the pressure the international ‘throwaway’ mentality was putting on the environment was unsustainable and that choosing to shop at second-hand shops and outlets eased that pressure.

“In its promotion for Second-Hand September, Oxfam said it would take 13 years for a person to drink the water needed to make one cotton T-shirt and a pair of jeans?

Oxfam said that by pledging to shop only second hand for 30 days or more, specifically for clothes, they would have a longer life and be less likely to end up in landfill.

The new magazine is available online at http://bit.ly/rrrmagazine