A second-year Digital Media Production student at Western Technical College in Wisconsin, who was part of a Community-Based Learning Program to produce a series of videos on The Salvation Army.

Digital Media Production students at Western Technical College in the US state of Wisconsin have made a series of videos for The Salvation Army as part of the college’s Community-Based Learning Program. 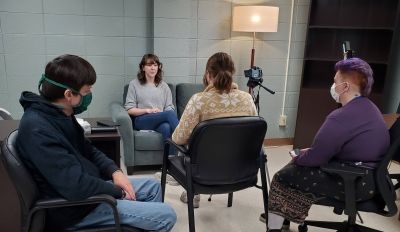 Hope said 15 students at the college in La Crosse worked in four groups to create two-minute videos. She said the goal was to highlight different aspects of the Army’s community programs, including its thrift stores, social services, food programs and the Christmas Red Kettle campaign and how money was raised to fund those programs.

“We gave the students guidelines of what we wanted them to capture within each of their videos,” Hope said. “We had each group take a section of what we do here in La Crosse and then create questions to ask staff within those programs.

“We work very closely with Western Tech because we are close. We have had some of our clients become students at Western, and we often have students volunteer with us.

“I would say they did a phenomenal job. I think they learned more about how we are faith-based and that our services are much more encompassing than just providing shelter,” she said.

James Bushman, College Digital Media Production instructor, said that, as in a professional production house, the students developed the storyline and video process from concept to production and would see the finished project used in the community, which was “a great opportunity for these students”.

Hope said the Central Territory La Crosse Division planned to use the videos internally or as part of its social media campaign over the next 12 months.