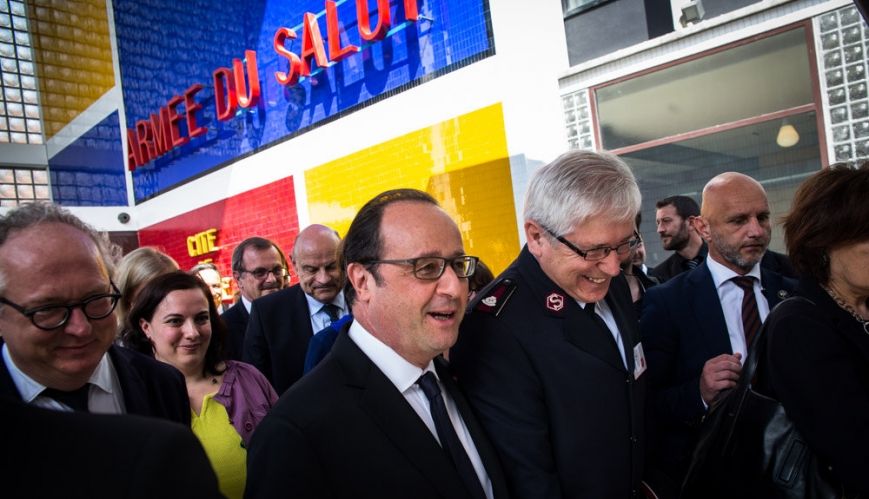 French President François Hollande spoke appreciatively about The Salvation Army’s commitment to the poor when he officially reopened a refurbished refuge in Paris this week.

Accompanied by three ministers and two secretaries of state, President Hollande officially opened the new-look La Cité de Refuge [City of Refuge] and was then given a tour of the facilities by Colonel Daniel Naud, Territorial Commander, France and Belgium Territory.

In his speech during the official ceremony, Colonel Naud concluded with words from the famous “I'll Fight!” speech given by The Salvation Army’s Founder, General William Booth, more than 100 years ago. President Hollande echoed General Booth’s stirring call to social action, speaking of the “necessity to fight” for a united, generous nation which works with organisations such as The Salvation Army to “protect human dignity”.

The new centre can now house up to 143 people, including families. Residents are assisted in their search for long-term housing and are also offered training, employment and education opportunities, preparing them to take their places in the modern workplace.

The La Cité de Refuge was initially inaugurated in 1933, in the presence of the then-President of France, Albert Lebrun. It is one of only two buildings in Paris designed by the famous architect Le Corbusier, often described as a father of modern architecture. Projects to house people living in slum conditions would become an important part of his life and work, but La Cité de Refuge – designed in conjunction with his cousin, Pierre Jeanneret – was Le Corbusier's first scheme for the “urban poor”.

The Paris Update website reported on the three-year renovation in February, revealing that: “Many features of the original building were rediscovered when walls that had been added over the years were knocked down, opening up generous spaces and revealing such thoughtful details as a small terrace with a light-coloured wall positioned to reflect light into the room on a gloomy day. Some changes were necessitated by evolving laws and standards. While the residents once slept in dormitories, they are now housed in rooms or studios, and the buildings (an extension, the Centre Espoir, built in 1978, has also been renovated) are now accessible [to disabled people]. Since the mission of The Salvation Army is not only to provide a bed and nourishment to the needy but also to help reintegrate them into society, the building, which is pretty much self-sufficient, has its own kitchen, dining room, rooftop terrace/garden, classrooms, workshops, laundry, library and gym.”