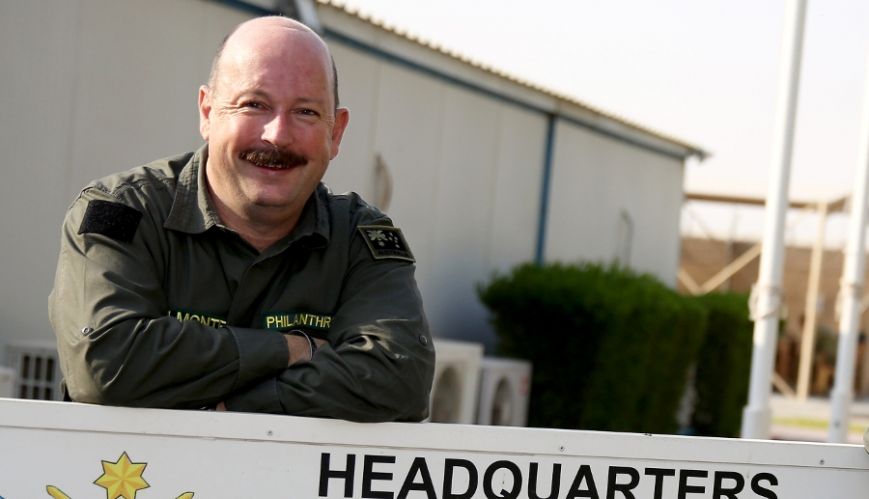 Captain Jon Belmonte is now deployed with the Red Shield Defence Services in the Middle East.

Captain Belmonte will continue the work of the philanthropic organisations based there, to all services and ranks of the ADF, and to some coalition forces. A philanthropic representative is primarily involved in the provision of welfare and wellbeing support to all personnel.

“We wish to convey the biblical message of hope, redemption and freedom available through Jesus Christ,” said Captain Belmonte. “The RSDS is a unique incarnational ministry that is immersed within the ADF. Its officers are a ‘ministry of presence’. We live in the same conditions, eat the same food, experience the same hardships and deprivations as the ADF members and are available 24/7. Our ministry is lived out in a Christ-centred life that is demonstrated through our thoughts, words and actions to all, be that either by a listening ear, a kind word, a prayer, or cold drink; or just being personally present and with them in times of their own individual and personal uncertainty.”

Despite the challenges of being away from family and living in temperatures exceeding 50ºC most days, Captain Belmonte is looking forward to always being present and available for the troops, in any situation, for the “whosoever”. He sees the representatives’ availability, and the ease with which they can be accessed, as one of their greatest benefits to ADF personnel. “We are constantly in and around the various units, groups and areas and are open at any time to listen, speak with or support individuals,” he said.

Captain Lyndley Fabre, RSDS Chief Commissioner, was the first RSDS representative to deploy to Camp Baird, from December 2015 to April this year. “Since then, the ministry has constantly grown and is further expanding,” said Captain Belmonte. “The RSDS is highly valued, supported and respected by the ADF. We have predominately worked with the Royal Australian Army and now we incorporate the Royal Australian Navy (RAN) and Royal Australian Air Force (RAAF) within the Middle East area. There have been many requests to have RSDS expand into the RAN and RAAF environments as people understand what a valuable resource RSDS officers are.”