Salvos and Woolworths take a S.T.A.N.D for disaster victims

Salvos and Woolworths take a S.T.A.N.D for disaster victims

Australians needing assistance during times of natural disaster will benefit from a new long-term partnership between The Salvation Army and Woolworths.

S.T.A.N.D (Support Through Australia Natural Disasters) will raise funds to assist the work of The Salvation Army Emergency Services (SAES) during natural disasters. Woolworths is now selling six-packs of 600ml bottled water and $1 from every pack sold will go to the Army.

Additionally, Woolworths have pledged to support the Army with a donation of $500,000 each year for five years and will also offer opportunities for customers to donate at their stores during natural disaster appeals.

“Having a commitment from a partner like Woolworths means they are really truly invested in what we do and are truly committed to understanding the need of disaster support,” said Jill Summers, Communications and Fundraising Business Development Manager. 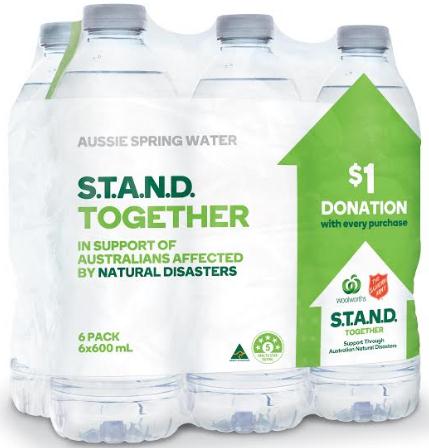 The Woolworths Group has supported the Army financially for more than 60 years, including the Queensland flood and bushfire appeals in 2014. This long-term agreement will now secure funds for the Army to support communities across all four stages of a natural disaster – preparedness, response, recovery and resilience.

“It helps us remain operational and provide training so we’re always ready to go in the best possible way when a natural disaster happens,” Jill said.

Salvation Army Chief Secretary-in-Charge, Colonel Mark Campbell, added: “The support Woolworths and their customers have provided over the years has helped our organisation deliver long-term relief communities who have been have been hit the hardest during natural disasters. This commitment guarantees that we can continue to provide this support when Australians need it most.”

Adam Goodes, former Sydney Swans AFL player and Go Foundation founder, an organisation which supports young Indigenous people through education, is the S.T.A.N.D Ambassador and Governance Committee member. He will be an independent voice, representing Australians when offering advice for the S.T.A.N.D program.

“I’m pleased to be able to come on board for this program to regularly review, evaluate and provide recommendations to assist S.T.A.N.D in their fundraising efforts and drive further awareness of the work being conducted during times of natural disasters,” he said.

S.T.A.N.D water bottle packs are available at a majority of Woolworths stores across Australia. The standard shelf price is $3.50 (except in South Australia and the Northern Territory, where it’s $4.10 due to the 10c per bottle Container Deposit Legislation).