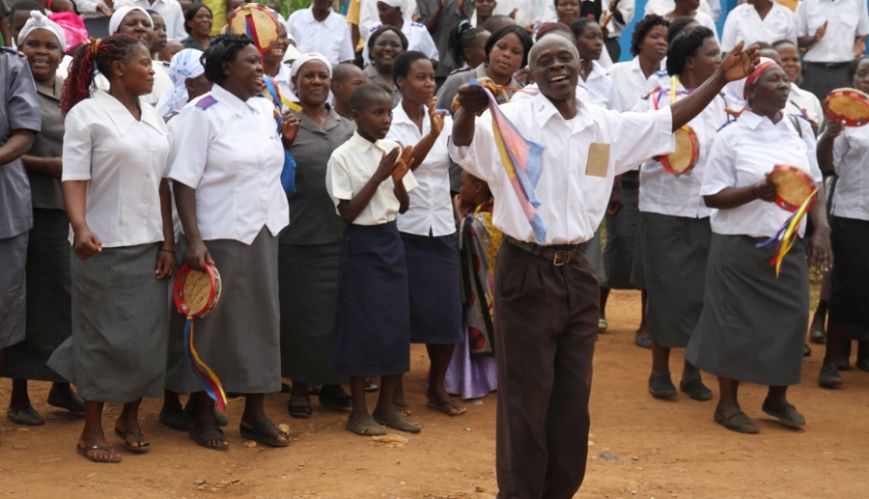 Crowds of Salvationists attended the commissioning of 152 officers in the Kenya West Territory.

In an historic weekend for Kenya West Territory, the Chief of the Staff, Commissioner Brian Peddle and Commissioner Rosalie Peddle, opened a new officer training college and witnessed 152 new officers being commissioned.

Huge crowds of Salvationists and friends from throughout the territory travelled long distances to attend the two outdoor events. An estimated crowd of up to 15,000 people attended the commissioning of the cadets on the Sunday, held at the sports arena of Masinde Muliro University of Science and Technology in Kakamega.

This event, which commenced with a magnificent march-past, lasted for several hours and included vibrant African singing, stirring preaching and culminated with the commissioning and appointing of the Messengers of Light cadets.

This unique commissioning event included 32 cadets who have undergone the normal two-year college training program, as well as 30 sergeants-in-charge who have been in leadership roles in corps throughout the territory, in some cases for up to 12 years.

The sergeants-in-charge have had access to formal training over these past three years so they could be commissioned as lieutenants – a strategy formulated by Commissioner Kenneth Hodder and his cabinet in 2013, and one which was warmly welcomed by the thousands of Salvationists attending the commissioning. 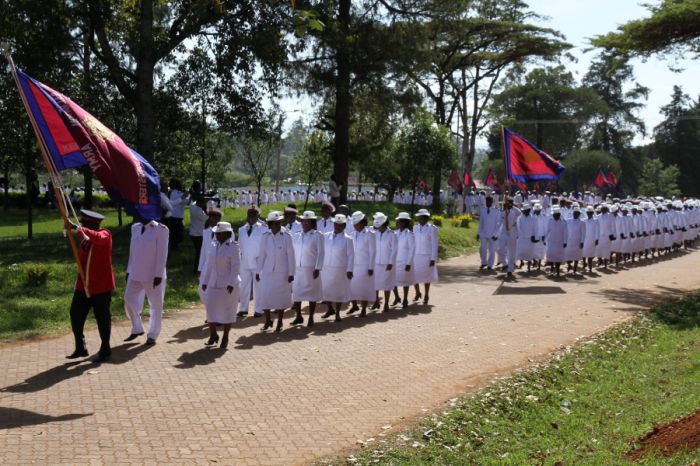 The march-past lasted for several hours and culminated in the commissioning service.

The Chief of the Staff recognised the enthusiasm and passion of not only the newly commissioned officers but also the thousands of soldiers who had travelled great distances in hot conditions to be part of the celebration. Following the new lieutenants’ affirmation of faith he said: “You recited the doctrines well. Hide these things in your heart. We must not be blown back and forward by the things people in the world are saying. People will laugh at you, they will challenge you. But you are preachers of the word of God! Be confident that the word of God can set the prisoner free.”

After he invited the crowd to respond to the urging of the Holy Spirit, large numbers moved immediately to kneel on the grass under a hot Kenyan sun, only tempered slightly by the occasional wafting of a breeze. The presence of many eagles soaring overhead seemed apt as the crowd responded to the moving of the Spirit.

In her preaching to the vast crowd, Commissioner Rosalie Peddle had also urged all present to be true to their faith and to be strong witnesses. “God is faithful,” she told them. “He will do more than can ever dream! You need to trust him. I cannot wait to see and hear what God is going to do through you.”

This historic occasion was honoured by the presence of several members of parliament and local county assemblies, led by the Governor of Kakamega County, Wycliffe Ambetsa Oparanya. A member of the territory’s advisory board, he spoke highly of The Salvation Army’s service in Kenya and of the leadership provided by the territorial commander and Commissioner Jolene Hodder.

The day was also notable as it was the final opportunity for the Hodders to address their soldiers before leaving Africa to take up leadership of the USA Western Territory. Kenyan Salvationists were loud and passionate in their admiration of the Hodders and the way they had led the territory.

Colonel Stephen Chepkurui, the Chief Secretary, will become territorial commander on 1 January. Commissioner Grace Chepkurui will be the territorial president of women’s ministries, and together they will look to build upon the visionary leadership of the Hodders. The opening of the modern and beautifully-designed training college (pictured right) at Turbo, about two hours’ drive from Kakamega, was attended by more than 2000 Salvationists.

The US$3 million building, which can accommodate up to 80 cadets, was built from funds provided by territories from around the world. The college is an example of investing in the future of The Salvation Army in Kenya, the Chief of the Staff emphasised. It is part of the long-term strategy of the territory to invest in officer training and leadership.

This is crucial in a territory, he noted, which continues to see amazing growth. Across the territory’s 12 divisions and 14 districts there are more than 520 corps, with a new corps being opened, on average, every nine days over the past year!

The territorial commander has been adamant over recent years that this type of investment in the training of officers is vital. To help achieve this, the strong support of other territories, including the two Australian territories, the four USA territories and from Canada, New Zealand and Norway, has been critical. The Kenya West Territory raised the funds for the college’s beautiful chapel. It has also established a trust fund to enable the ongoing running costs of the college to be met.

The opening celebration meeting, which lasted several hours was joyful, with music, dancing and energetic preaching.

Commissioner Rosalie Peddle urged the crowd of Salvationists to continue to be “the light of the world. Christ is calling us to be bright lights. The darkness is challenging ... in our families, in our villages, in our towns. If ever there was a time when God’s people need to shine it is today,” she proclaimed.

In his preaching, the Chief of the Staff reminded all gathered that “we come by the way of the Cross. We come by the name of Jesus. There is no other way!” He continued, as he encouraged the congregation: “Friends, today we must be sure that God has our heart and our soul. These things belong to God. The devil has no right to them.”

Pointing to the new college, he challenged he cadets and all present: “This place is put here for people who are ready to fight. To fight for God!”

As soon as he appealed to the crowd to respond in dedication and prayer, streams of soldiers and officers surged forward and knelt on the grass. It mattered not that there was no mercy seat out on the grass. Under the Kenyan sky it was a powerful conclusion of the opening and dedication of the college.