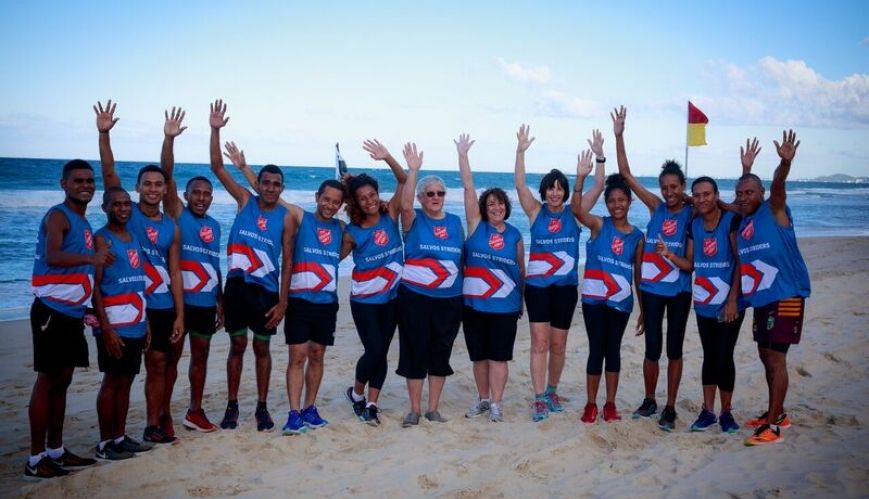 Runners, mentors and Hope and a Future project leaders gathered to encourage and support each other in the lead up to the Gold Coast Airport Marathon. Photo: Jacques Va Photography.

Eight young people from The Salvation Army’s Papua New Guinea Territory celebrated with delight and relief as they crossed the finish line of the 42.2km Gold Coast Marathon on Sunday 2 July.

They trained for the event as part of the The Salvation Army’s Hope and a Future program, with mentors both from Australia, and those from PNG who had previously completed the marathon.

“These young people have all grown up so much through this,” said Bill who, with each of the other mentors, spent time with the participants training in PNG before they arrived in Australia. “This program changes their lives physically and spiritually and they have all done really well. The mentors have been great and are an essential part of this program.” 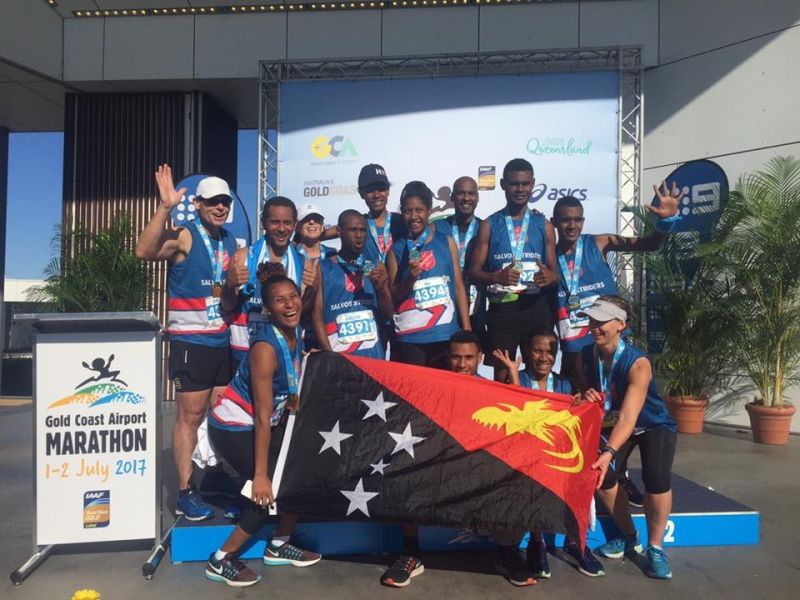 All eight participants successfully completed the marathon, and were delighted with and proud of, their medals.

Aged Care Plus and Salvos Legal are the major sponsors for Hope and a Future.

“I am the first married woman to participate in this program and it was a struggle for me at the beginning,” shared Serah, who also has two young children. “I kept reminding myself of our key scripture from Philippians 4:13 that, “I can do all this through him who gives me strength”. With God, all things are possible.

“I learned that, as in a race as in life, you have to go through the tough times to get to the finish line. I’ve also learned about leadership and have more energy in life because I am now fit. Now that I’ve done this, I think the time is right for me to go back to study. This program really does give us hope and a future.”

For George, the program has been a life-changing experience. “I am a new person,” he shared. “I have come to know God in a deeper way, and, as I struggled after 38km in the marathon, I knew that I could do it because with God all things are possible.

“When I go back to PNG, I will tell my people, my friends and family, about God, and how, when we know him, the past is gone and we can move forward and change our lives. I also want to teach the young people on the streets and in the church what this is all about.” 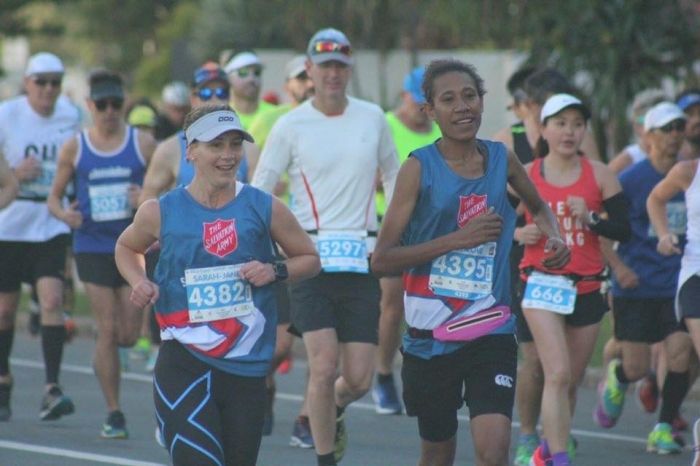 Lieut-Colonels Kelvin and Cheralynne Pethybridge, Chief-Secretary-in Charge for the Australia Eastern Territory and Territorial Secretary for Women’s Ministries respectively, completed the 5.7km walk challenge, and led a worship meeting with the runners the day before the marathon. Major Kelvin encouraged the runners, using Joshua 1, to be strong and courageous as they faced the challenges of the marathon ahead.

Lieut-Colonel Miriam Gluyas, NSW and ACT Divisional Commander, received her medal for the 10km run. Other Salvation Army leaders, including PNG expatriates, representatives from Aged Care Plus and Salvationists from different areas, also took part in the weekend's events. 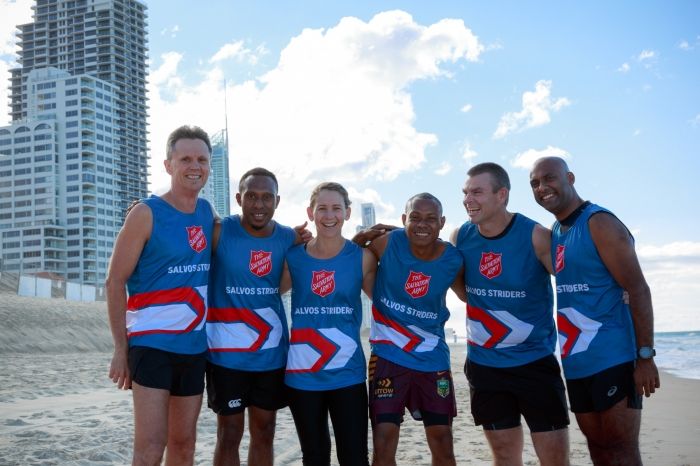 Six of the eight program mentors - the mentors are a key part of the program and encourage the participants physically, mentally and spiritually. Missing in the photo are Sharon Callister and Major Nesan Kistan. Photo: Jacques Va Photography.

As part of the program, the young people will spend this week serving and participating at Queensland EQUIP, The Salvation Army’s camp for youth and young adults that focuses on preparing participants for frontline mission in their communities. John and Isaach will serve at the Ipswich Corps, west of Brisbane, in Indigenous Ministries.

Sharon Callister, Chief Executive Officer of Aged Care Plus, said that the program is going from strength to strength, with the fruits of four years of the program now so evident. “The lives of the graduates are enriched, they are taking up leadership positions in their corps and communities and it’s such a blessing and a privilege to be a part of this,” she said.

“We changed the selection process for participants this year, with some stringent criteria, a selection panel and time trials. Those chosen have a done a lot of work – it’s been tough – but it’s a joy to watch them grow and see their lives change.

“Anyone from The Salvation Army across Australia is welcome to be involved in the program, through the Salvos Striders and Salvos Striders PNG Facebook pages. The program is about fitness, but also community, fellowship and support.” 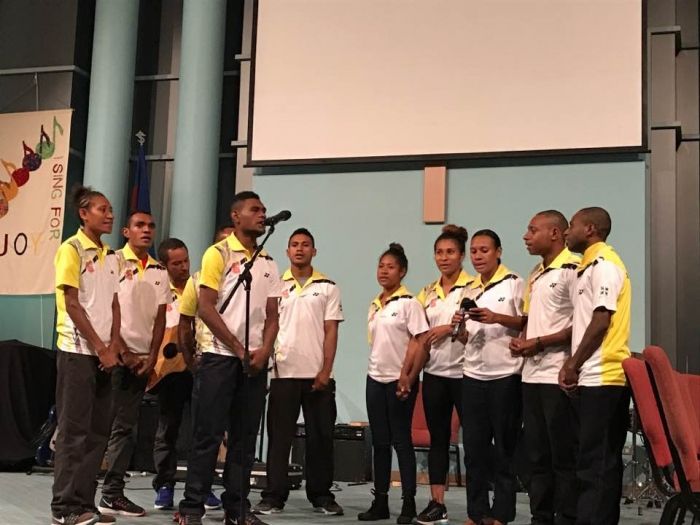 The PNG team led worship at a meeting at the Gold Coast Temple Corps on the evening prior to the marathon.

“It’s just wonderful to see the young people having the opportunity to do something they’ve never done before, said Lieut-Colonel Miriam Gluyas, NSW and ACT Divisional Commander, who was instrumental in starting the program in PNG, with Sharon Callister, as part of their work in Manus Island with the now closed Humanitarian Mission Services.

“Those who have gone through the program are growing in leaps and bounds. They are excelling at their jobs, as they pursue their education, and some of them are also working for The Salvation Army. We are incredibly proud of them.

“This year’s participants have trained hard and it’s also encouraging to see Aussie Salvationists come alongside them, encourage them, and be a part of the program.”

Captain Gini Bugave, Territorial Youth Secretary in PNG, who ran the marathon for the first time, after two half marathons in previous years, gave extensive support and encouragement to the participants.

“This year, with the pain I had during the marathon, I learned to trust the Lord in every step that I’m taking,” he shared. “The pain didn’t go away but I didn’t come to quit and God taught me that he wants me to finish the race, no matter what the situation in a race, or in life, is. I’m a winner.

“I’m so grateful for every Strider, for the six months they’ve given their all in training and for the sacrifices they’ve made. I’m so proud of them. When we go back, they will be a great example, showing others what can be done.”

For more information, go to agedcareplus.salvos.org.au/hope-and-a-future/