The Wunderlich family have now held three birthday parties where donations were accepted instead of gifts.

All Minha Wunderlich wanted for his 10th birthday was money. Not to buy the latest Lego set or video game, no, Minha’s birthday invitation read: “No presents! Donation instead!”

Minha is the son of Salvation Army officers, Lieutenants Marcus and Jisook Wunderlich. His heart for mission was evident in the birthday invitation he created with his dad. It read: “Do small things with great love.” 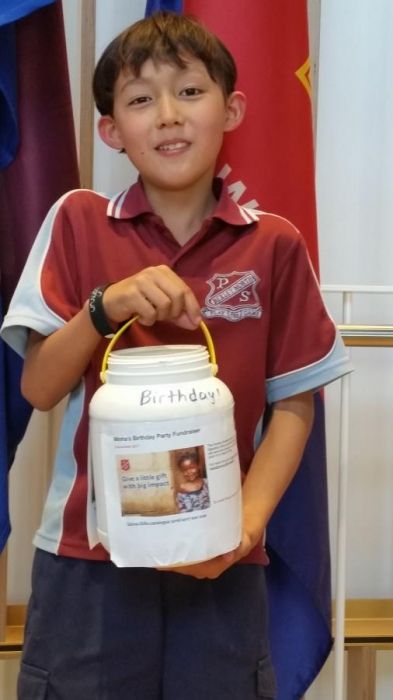 Lieutenant Marcus Wunderlich said that Minha’s sacrifice had a big impact on the parents of children invited to the party. “They were very impressed that a child would willingly give money instead of receiving a present. Some parents were saying, “My kids would never do that”. The parents were just shocked that this was happening.”

Lieutenant Marcus said he is proud of his son’s heart for God and heart for others. Minha wrote on his invitation that he wanted to raise money for The Salvation Army to “send to countries that are poor or need help” and when the final fundraising figure became clear, he was overjoyed.

At the end of the party, Lieutenants Marcus and Jisook surprised Minha with a small gift of two “Captain Underpants” books that they knew he really wanted to read.

“Intentionally, me and my wife have decided for our kids to try and make sure that we don’t inundate them with presents,” Lieut Marcus said. “This was one event where instead of buying small little presents, Minha said, ‘I’m going to give out to someone else’.”

The Bible talks about sacrificial giving. But in a country as rich as Australia, does our generosity and philanthropy really make a sacrificial impact on our lives, in the way that the widow’s offering prompted Jesus to say, “She gave extravagantly what she couldn’t afford – she gave her all”?

Perhaps we could all learn from Minha, the little fundraiser.