The services recognised the historical and sentimental significance of the territorial colleges before Eva Burrows College is officially formed as the national college for The Salvation Army in Melbourne in January.

“Catherine Booth once said, ‘If we are to better the future, we must disturb the present’, and I think we plan to carry and continue that challenge, even as we leave behind [our old identities].”

As the only officer to have officially lived at the last three Southern Territory colleges, former Catherine Booth College Director of the School for Learning and Development, Major Jim Weymouth, reflected on the legacy of Catherine Booth and how the college culture developed from this.

He highlighted the dramatic difference that adding curriculum, which included clinical pastoral education and social work, had on officers in the 1970s, and how this was aided in recent years by partnerships with the University of Divinity and Whitley College.

“We have moved on from an era of oscillation into an era which I think of as collegial,” Major Weymouth said. “This provides a place for everybody in The Salvation Army who became aware of their need for growth and development.

“It’s a journey which is far from complete, and I’m hoping that the transition to Eva Burrows College and Australia One ushers in a fresh opportunity for our training resources to link equally across all parts of the organisation.”

College staff, cadets and well-wishers attended the events, where they were treated to recollections of what the college has meant to various people and their hopes for it moving forward. Attendees in Melbourne selected stones, and those in Sydney chose key symbols around the room, to remember the significance of the past and look forward to the future as one college. 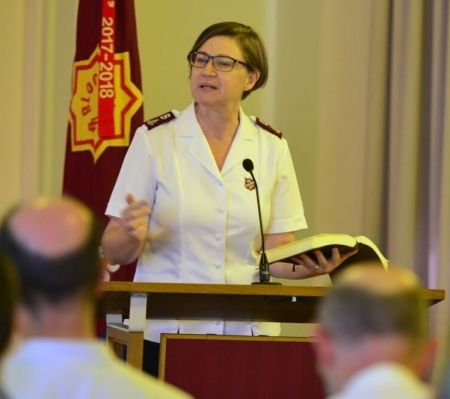 Major Deborah Robinson (pictured right) focused on this in Sydney, preaching from Psalm 27 about having confidence in the presence of God even amidst change.

“In this season of advent, as we wait on the Lord we are called to be strong and to take heart,” she said. “Not to simply endure, but to be confident and full of hope and expectation because, as with the psalmist, we remain confident of this: that we will see the goodness of the Lord in the land of the living.”

Near the close of the Southern Territory service, Major Morgan announced that Amanda Merrett would be the first recipient of the General Eva Burrows Australian Scholarship, further enforcing the legacy of a bold, committed Army moving forward. An African recipient is still to be selected for the 2018 scholarship.

The national Eva Burrows College will officially open in January 2018. Campus operations will continue in Victoria and NSW while the shape of the new National College is finalised. The first national session of cadets will be welcomed to the Melbourne campus at the end of January.