Two years ago, Mark Soper, the Menai Salvation Army Corps Leader, arrived at the corps early one morning and discovered a woman asleep in her car in the carpark.

“When she got out of the car I could see she had been beaten; fat lip, black eye and scratches on her arm and body. She didn’t know where to go, so she came to the nearest Salvos. We gave her something to eat and she shared her story of domestic violence.”

Mark and several corps members worked with her to find somewhere to stay. They called hotlines and different services but nowhere was available in the Sutherland Shire, where Menai is located. The closest place was to accept three nights accommodation in a motel in western Sydney, more than an hour away from her support service. 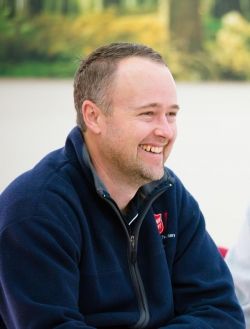 “When I went to bed that night, I said to myself, ‘We have to do more,’” remembers Mark (pictured right).

A week later, two more women and families who had been impacted by domestic violence came to Menai Salvation Army for help. God was opening the eyes of the corps about the hidden crisis of family violence right in their local area and the burden on the hearts of those praying increased.

Mark started to do some research on the issue and met with local agencies. He discovered waiting lists for services of more than 50 families. There was a huge need for accommodation for the families affected. “The sad reality is that most services are in the city and western Sydney, and so many women stay in vulnerable and dangerous situations because they don’t want to take their kids from school and locate somewhere that is unknown to them, without their friends and support structures,” he says.

While Mark was doing research, he and corps members were also praying.

After speaking with leadership from The Salvation Army NSW/ACT Divisional Headquarters, Mark learned that there was no money available to fund an accommodation service in the area, yet he wrote a proposal anyway.

“Shortly after writing the proposal we were informed that a bequest had just been given to The Salvation Army specifically for families affected by domestic violence. We were given the money we needed on a tight budget to buy a house!” he says.

Feeling that God’s hand was genuinely upon this new ministry, the corps leadership team soon found the perfect house to accommodate two families. “However, soon after we expressed interest in the property someone else bought the house. I was devastated,” says Mark. “My lovely wife said to me, ‘If God wants you to have the house, you will have the house.’

“So I rang up the agent and I said, ‘I just want you to know, I’m praying that the sale of the house falls through so that The Salvation Army can buy it’. He laughed and said, ‘Don’t get your hopes up!’”

Sure enough, the sale did fall through and The Salvation Army secured the property and began working with a local domestic violence support agency to provide medium-term housing for women and children at the site.

The house is called Samara House, which means “protected by God”.

“The best part is seeing lives changed,” says Mark. “Seeing a lady and her child start living in the house and gradually start to settle in the area, and become part of our community programs. She’s starting to feel like she has somewhere safe to live and a place to belong and feel accepted and not judged. They’re now calling Menai Salvos their church home."

All through the power of God and his people who prayed.