When Bankstown Corps in south-west Sydney decided to run an Alpha course, which focuses on the basics of Christianity, organisers weren’t sure how many non-corps folk would turn up. But God had plans greater than their faith.

Bankstown Corps Officer, Lieutenant Frank Wang, says with organisers having no experience running the Alpha course, they decided to just “give it a go”, invite as many people as possible and see what happened. If no one outside of the corps fellowship came along, they could still enjoy good teaching and great fellowship.

The result was far beyond their expectations.

“At the first meeting we had 28 people,” says Lieut Wang. “It was better than we expected. Some of the people we have known for a while, some had been coming to the church but we didn’t really know what their situation was. There was lots of good discussion.”

Those who attended said they were grateful to have a forum where they could ask questions about God and life, and how everything intertwines and faith is lived out.

A few weeks into the course, a new group of people arrived for the Friday night Alpha meal and discussion (pictured below). They were regulars at Bankstown Corps’ community lunch, which runs on Wednesdays and Fridays, but had rarely attended Sunday meetings. 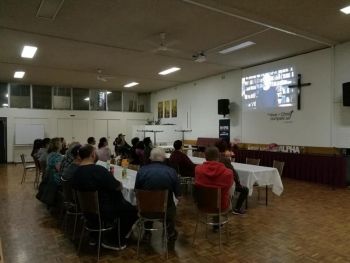 “We thought they would only come once, but the second week they turned up again and the third week they turned up again,” says Lieut Wang. “They also helped with setting up the tables, packing up, cleaning, that kind of thing. And we could see that there were changes in them because the first time when they came, after dinner they all wanted to go. We encouraged them to stay and watch the video and the second time most of them stayed for the video and the third time they began to join the conversation.”

Fast forward to the end of Alpha and a new congregation has been birthed.

“It’s really exciting and really unexpected to us because we thought, even before we started Alpha, we thought 10 weeks was going to be really long and really tiring for most people, but to our surprise they loved it and they didn’t want to stop – they wanted to continue!”

The group, now called Bankstown Community Fellowship, meets every fortnight on a Friday, sharing in a meal and then watching a teaching video and sharing in discussion.

In line with the National Vision Statement, Bankstown Corps is focused on creating meaningful engagements with “one life at a time”.

Earlier this month, a prayer station was set up alongside the weekly SalvosConnect and Bankstown Hub services. On the first morning of its operation, volunteers prayed with five people and their children.

“People have deep spiritual needs, we need to go beyond just financial and material assistance,” says Lieut Wang. “Only God can help them with their real issues. We pray this ministry will be fruitful and bring real transformation to people’s lives, one at a time.”

Last year, the corps launched a telephone prayer line, which ran on weekday evenings. Anyone connected with Bankstown Salvos was invited to join the half-hour prayer session by calling a telephone number and entering a code to participate in the conversation.

“People joined the telephone prayer conference line to pray, study, discuss, and share. We prayed for pretty much everything and everyone we could think of. This must be what God is doing, drawing people to himself in prayers, praise God!”

This year, Bankstown Salvos will celebrate its centenary, remembering the past and celebrating the vibrant future that God has planned for his Army in south-west Sydney.