National leaders brush up on their sole connection with officers National leaders brush up on their sole connection with officers

It’s not every day that the leader of a national organisation offers to shine the shoes of an employee. But that’s what happened this week at Victoria’s Officers Fellowship.

But it wasn’t a gimmick, a demonstration or a carefully crafted event designed to showcase servant leadership. According to National Commander, Commissioner Floyd Tidd, it was simply two blokes who wanted to raise money for a good cause learning the trade from two experts in the field.

“There was no intention to demonstrate something, just to do something,” he said. 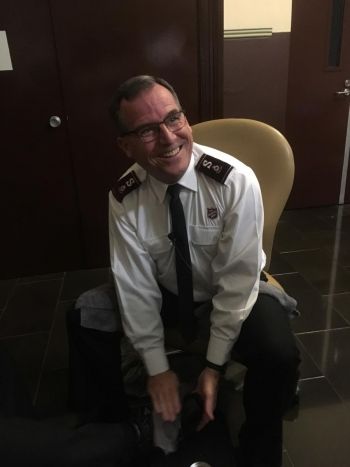 It all came about when Commissioner Tidd and National Chief Secretary, Colonel Mark Campbell, met Darren and Scotty, two men who have experienced homelessness and are now part of a social enterprise connected with The Salvation Army’s Project 614.

Project 614’s Major Brendan Nottle says it began in October last year and has been successful in giving long-term unemployed people experiencing homelessness work and hope. “We’ve gone into partnership with a men’s clothing store in Collins Street [Melbourne CBD] and it got council permission to set up a shoe-shine out the front of the store. The guys get $7.50 for a pair of shoes but people have been really generous and giving them tips and getting to know them.

“One of the fellows was saying that his self esteem is much better now because he’s out in the public doing something he loves and he’s being respected.”

Blown away by their shoe-shine experience, Commissioner Tidd and Colonel Campbell asked Darren and Scotty if they’d like to come and shine shoes at the Victorian Officers Fellowship on Monday 12 February.

“They liked the idea,” said Commissioner Tidd (pictured above right). “They didn’t want the money for themselves, they wanted it to go to a charity or some initiative of the Army, so the money was actually decided to be given to the overseas serving officers.”

While Darren and Scotty were shining Commissioner Tidd and Colonel Campbell’s shoes they gave them a lesson on the art of a great shoe-shine. “I want to pay highest tribute to Darren and Scotty for using their skills and gifts and making a difference in their own lives and also a difference to others. The work that they do matters, and were grateful for the opportunity to learn from them and offer the same service to other officers.” 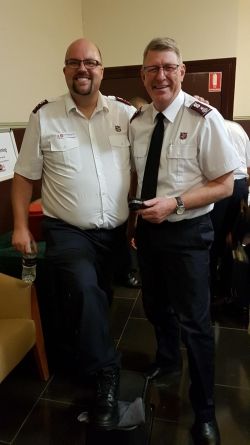 And while some officers may have felt a little awkward about receiving a shoe-shine from the top-ranked officers in the country, many embraced the idea and gave generously to the cause. (A total of $5,116 was raised throughout the Officers Fellowship.)

“It was fun, you know, it offered plenty of opportunities as well to catch up with some of our officers and even share a prayer for their ministry. I was able to check in with an officer who had just changed appointments last month asking ‘what has that change been like for the last three weeks? Can I pray with you before we get up from this shoe-shine?’ I am grateful for the experience.”

The big question is … should Commissioner Floyd Tidd and Colonel Mark Campbell give up their day jobs, or should they leave shoe-shining to the experts?

One recipient, Captain Pete Brookshaw (pictured right) was happy with the quality of the shoe-shine he received from Colonel Campbell. “These moments are worth laughing about, like, ‘Hi Floyd, how’s your sole?’”, but on a more serious note he added, “With the introduction of the new national vision of The Salvation Army, it’s crucial for Salvos on the frontline to know that we have leaders who have a heart to serve!”