Parramatta Salvation Army in Sydney’s west has officially farewelled the building it has called home for nearly 50 years.

National Chief Secretary Colonel Mark Campbell (pictured right) and National Secretary for Women’s Ministries, Colonel Julie Campbell, were the special guests on Saturday 3 March as members and friends of the corps reminisced on half a century at the Smith St site. 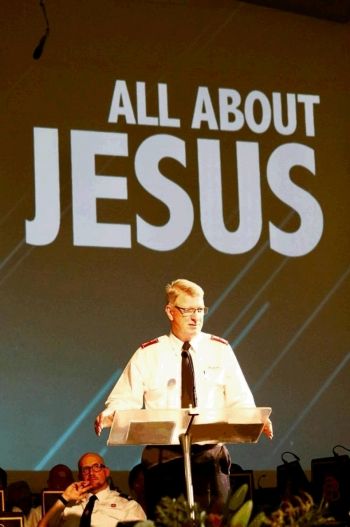 The corps will move into a new complex at 426 Church Street in April 2019, using temporary sites over the next 12 months until renovations at the new venue are complete.

The farewell event started with an afternoon tea and a memorabilia viewing at 4pm. This included video of the ABC’s broadcast of a Parramatta holiness meeting in 1984, which the corps obtained from the Australian Broadcasting Corporation’s archives. This was followed by a celebration concert at 6.30pm.

The Parramatta Corps hall was opened in November 1969, with comrades marching joyfully around from the George Street site that had also been the corps’ home for 50 years to that point. At the time, Sydney’s west was opening up and young families were moving out from Sydney’s inner-suburbs and corps such as Petersham.

Current Corps Officer, Major Grant Sandercock-Brown, said that by the 1980s Parramatta was the biggest corps in the Australia Eastern Territory.

“The body of the hall seated more people than it does today, and even though on Sundays about 70 people were on the platform, extra chairs were often needed,” he said.

“In the late 80s, the first major attempt to relocate the corps was explored. Plans were drawn up for a move to Northmead, but these were eventually shelved. However, the ministry of the corps continued through the support of overseas mission and Kid’s Camps. Our fantastic youth and children’s ministry continued to grow, ministering through Sunday school, Junior Soldiers programs, SAGALA, and musical groups.”

The Saturday evening concert was attended by 500 people, with more than 1000 views of a live-stream of the event. The concert was broken into five decades, which celebrated the music and ministry from each decade. 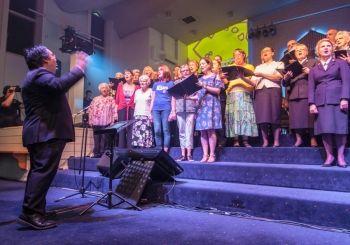 These “decades” included video testimony from people like Major Evelyn Sneller, who spoke about the 1970s. Major Sneller came to know the Lord at Parramatta Corps and went on to The Salvation Army Training College to become an officer. David Godkin, who grew up in the corps, remembered the 1969 opening of the Smith St building as a young boy.

One of the video testifiers, talking about Parramatta’s marvellous extended ministries, was Margaret Poore who was also presented with her 25 Years of Service certificate by Colonels Mark and Julie. She was specifically honoured during the concert for her implementation of ministries like Fresh Start for divorcees, which was amazingly innovative. English conversation classes were also started by Margaret in the 1990s, and family ministries to the wider community began. During this time, the rear hall was remodelled to assist the changing needs of the corps.

The youngest testifier was Daniel Evans, who focused on Parramatta Corps’ faithful commitment to the annual Kid’s Camp at Collaroy. During the 1970s, the corps was asked to take on Kid’s Camp as a youth group project and generations of youth group participants have done so ever since. Daniel spoke of the significance that serving at Kid’s Camp has had on his own spiritual development.

Major Sandercock-Brown said Sunday morning worship was a chance to thank God for all he had done in the past, as well as what he will do in the future.

“This was a very meaningful time for many long-term soldiers and tears were shed as they remembered significant occasions in the hall such as weddings, dedications, conversions, and funerals,” he said.

Watch the highlights reel used during the celebration.

* Information for this article provided by Parramatta Corps