A huge crowd of officers, Salvationists, well-wishers and friends of The Salvation Army gathered on anational highway in the India South Eastern Territory to welcome the international leaders, who were seated in a motorised chariot.

Hundreds of Salvationists, well-wishers and friends of The Salvation Army then gathered on the national highway to welcome the international leaders, who were seated atop a motorised float.

In the public meeting that followed, the General spoke about believers’ lives being transformed. In response to his message, 12 young people dedicated their lives for officership at a Cross and 525 people knelt at the mercy seat.

The next day the General visited and dedicated to God the new territorial headquarters building, funding for which came partly through the generosity of Salvationists from the USA Western Territory. The new facilities have almost cleared the registration process, and it is hoped that the long-awaited transfer to the location will take place shortly. 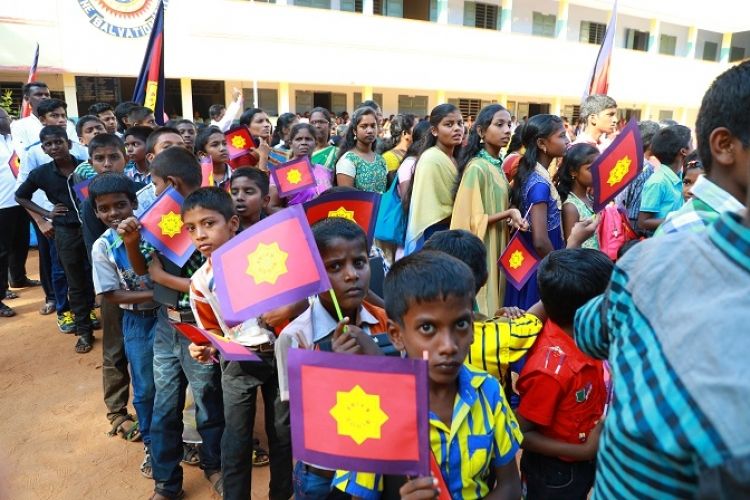 In the afternoon, around 5000 children and young people attended a youth fiesta, which gave opportunity to show their talents in praising God through colourful performances. They were encouraged by the General to develop skills that will enable them to work towards their hopes and dreams.

Unveiling a plaque at a newly constructed prayer hall at Muttaikadu Corps the next day, the General made clear that it was to be a house of prayer for all the people. The General also reminded his listeners of the importance of engaging actively as agents or change and transformation in their communities.

Words of greeting were given by Father Manohiam Xavier, the local Roman Catholic parish priest. His participation was just one example of the way in which the international leaders’ visit brought people together, with villagers working in harmony, without religious or caste discrimination, to receive the world leader of The Salvation Army. 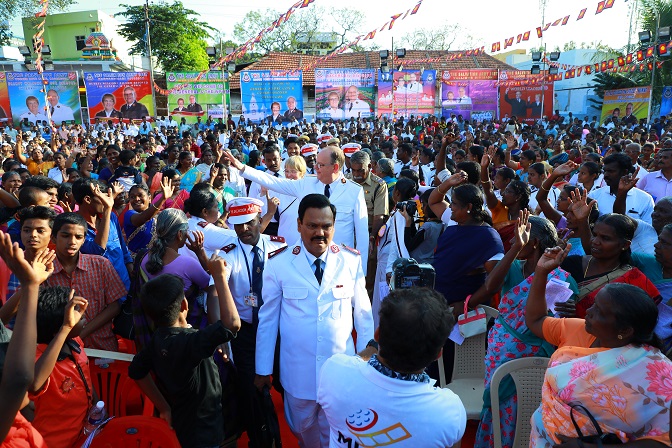 In the evening the General laid the foundation stone for a new building for Catherine Booth Hospital. He encouraged the hospital’s employees, saying that – through the medical services they offer without discrimination – they can show the love of Jesus.

An HIV-positive patient, who lost her husband to HIV/Aids, spoke about the help she had received from The Salvation Army which, she said, had never seen her as a Hindu woman but “as a suffering human being”. She said through tears: “I am standing and living in the community with good status I received by the sacrificial service of The Salvation Army.”

At Dennishpuram Corps, where the General dedicated to God the new officers’ quarters, 2000 people gathered to greet the international leaders and to enjoy various types of cultural dance. The General encouraged people to “shine in the darkness” and “bear fruits”.

On the last day of the visit, the international leaders conducted a spiritual meeting for the cadets at the officer training college.
The final event was a self-help group gathering, arranged through the Community Health Development Program and attended by 3000 women.

Launching a new venture to plant 25,000 saplings, the General reminded the crowd about the importance of combatting climate change.

The meeting was attended by Mr Vijaya Kumar, Member of Parliament, who applauded the service of The Salvation Army in helping “downtrodden” people.