Southern Territory Social Justice Coordinator Sandy Crowden, and Brooke Prentis (speaking above), who is a member of The Salvation Army’s National Aboriginal and Torres Strait Islander reference group, facilitated a workshop entitled “Listening to guests of ancient hosts on ancient lands” at this year's Surrender Conference.

Are we citizens or saints ... or can we be both? That was the question asked at the Surrender 18 conference held last weekend at Belgrave Heights Convention Centre in Victoria.

More than 1000 people attended to reflect on their lives and faith during keynote talks, workshops and conversations.

The overarching theme was “Can we embody the way of Jesus now as citizens in our places and the world, yet hold an eternal identity as saints?”

Amanda Merrett, assistant to the social justice coordinator in the Australia Southern Territory, says Surrender is a safe place to explore deep questions. 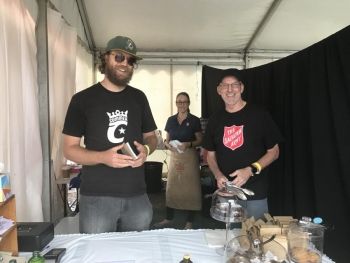 Just Salvos was one of Surrender’s sponsoring partners, involved in organising and developing the theme in the lead-up to the conference and providing resources throughout the weekend (23-25 March).

“Partners were invited to take part in one of the general sessions by sharing how someone in their tradition lived or lives as a citizen and a saint. Sandy Crowden (Territorial Indigenous Ministries Consultant) spoke about General Eva Burrows and her life,” Amanda said.

In his workshop, Major Brendan Nottle, of Melbourne Project 614, generated interesting discussions with people who wanted to know how to engage with those experiencing homelessness.

“Brendan asked, ‘How do we live as citizens when our fellow citizens don’t have their basic needs met’?” Amanda said. “He talked about his work alongside people experiencing homelessness, some of the challenges he faces, Christian responses and how you care for yourself while caring for people in these situations.” 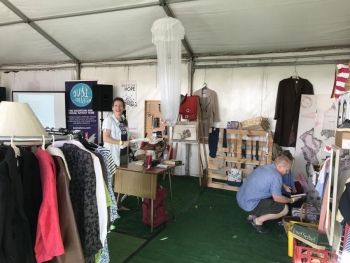 The Salvation Army was also invited to have two pop-up stores to raise money for mission. Mitcham Salvation Army sold burgers (above, right) while Ferntree Gully Salvos set up a mobile op shop (pictured right) – always a popular feature because the weather is notoriously unpredictable.

As a Salvationist, Amanda felt the conference spoke to the heart of The Salvation Army’s vision, that we are called to bring the kingdom of God on Earth, and that means engaging with people on the margins. She found having the opportunity to talk with people who are asking the same questions about justice, discipleship and mission was invaluable.

“Surrender has really encouraged me to do mission in the hard places and it’s great to connect with others who are doing that, who understand you and who will pray for you,” she said.

“When you engage in the hard places, it can make you question your faith and really shake you up, but Surrender is a safe place where you can work through difficult questions.”