Church unity gets Lismore back on its feet 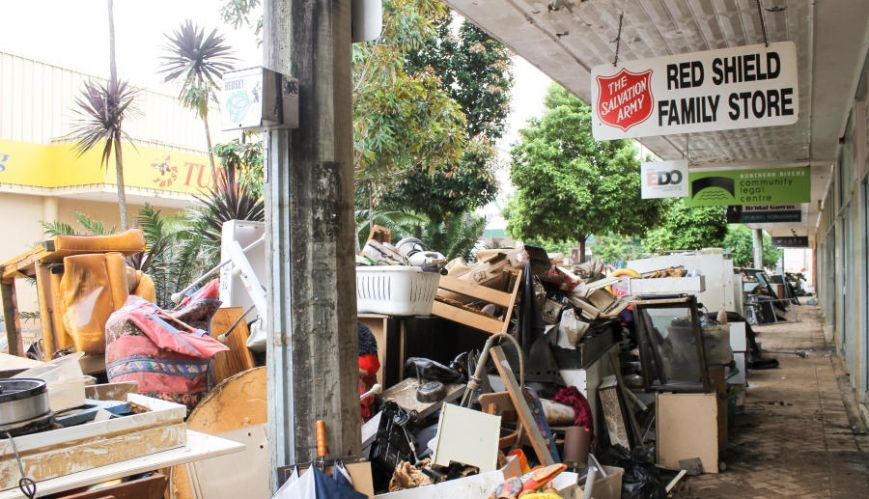 Church unity gets Lismore back on its feet

It will be a year to the day on 31 March since the north NSW rural city of Lismore experienced its worst-ever natural disaster – a devastating flood in the aftermath of Cyclone Debbie, which triggered a massive clean-up and recovery program.

Cyclone Debbie had made landfall in Far North Queensland just days earlier, devastating the communities of Airlie Beach, Bowen and Proserpine, before continuing to wreak havoc as it made its way down the Queensland coast into Northern NSW.

Alongside emergency service personnel and hundreds of volunteers in Lismore, local churches played a key role in getting the city back on its feet.

The Salvation Army, together with a few other churches, continues to offer support and assistance as part of its strategy of “being there for the long haul”. 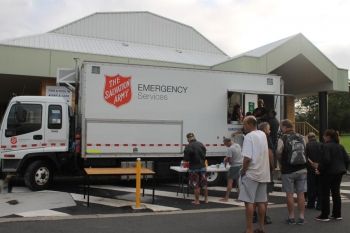 Salvos and volunteers provided three meals a day for four days at the main evacuation centre, worked with flood victims in processing flood-relief application forms, and even went door-to-door seeking out people who were unaware of available aid.

The combined churches of Lismore offered assistance in a range of other capacities including: handing out refreshments to people clearing flood debris from business premises; getting together for a prayer walk around the central business district; chaplains and church volunteers personally contacting affected business houses and people in residential areas; organising an information meeting for flood workers on handling post-flood trauma and stress; and organising working bees to help with house restoration.

There are individuals still needing support, according to Lismore Salvo volunteer Renai Ross, who has estimated the Lismore Corps assisted 30 flood-affected families with gifts and hampers for Christmas on top of distributing more than $500,000 in financial aid in the local postcode area and providing some kind of help to more than 650 flooded households.

The way churches rallied together has drawn praise from the Lismore Mayor, Isaac Smith, who described their response during and after the flood as having had a wonderful impact on the local community. “Denominations did not matter; the flood brought our churches together like I have never seen before,” he said. 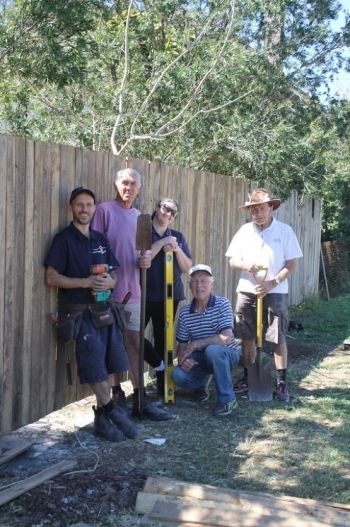 Another local Salvo, Samuel Bacon (pictured far left with Glenn Shume, Renai Ross, Kevin Elsley and Val Bennett), teamed up with Renai to go doorknocking, armed with a map that identified the residential areas where building damage potentially was greatest, working on the floor height of floodplain dwellings and the height of the March flood. The exercise was able to not only pinpoint the worst affected, but also to uncover occupants who for various reasons could have missed out on flood aid –“those who could have fallen through the cracks”, as Samuel put it.

The doorknocking task was both rewarding and emotionally draining, Samuel says. “Rewarding by being able to help those who needed help the most, and emotional by sitting with residents and hearing their stories.”

Samuel also was part of the Business Chaplains Program, which the churches organised in co-operation with the local council. The chaplains were able to get alongside many of the local business operators with the kind of help churches are good at.

Craig Newby operates a rollerskating rink on the riverbank. He said if it wasn’t for The Salvation Army he may not have reopened his business. “We ran out of money but have been able to keep going thanks to practical as well as financial help from the Salvos,”he said.

Then there is “Shirley”(name has been changed), who lost practically everything when floodwaters inundated her house. She was directed to the flood recovery centre, and a kind Salvo assured her that “God would take all her broken pieces and put them back together into something beautiful”. To show her appreciation Shirley created a cross made out of mosaic pieces and presented her work to the local corps.

Resilience is a word meaning the power of recovery, being able to rebound, and it sums up what has happened to Lismore post-flood. In many ways, according to Mayor Smith, the community is better than it was before and is now better prepared for the next flood.

In recognition of the community’s resilience, the NSW Government’s 2017 NSW Get Ready Community Award, and the Resilient Australia Award, both came Lismore's way. 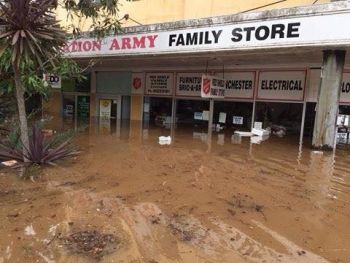 The Lismore branch of the Helping Hands community group appealed for volunteers to help with the clean-up, resulting in about 2000 people lining up for some 1000 tasks.

One volunteer, Michael Jones, put his peer-support skills to work, contacting the homeless, the aged and the isolated. His motto is good deeds should not be rewarded, however, he would like to see the upcoming flood anniversary to be a celebration of community spirit when the city pauses to reflect and share experiences and hope for the future.

The story of the Salvos’ involvement in the flood recovery process would not be complete without reference to its own problems when the Lismore Red Shield Family Store was devastated. Typically, Salvos and volunteers were involved in a big store clean-up while helping others. The new-look store is up and running again and is drawing much favourable comment from the general public.

Kevin Elsley is a soldier of the Lismore Corps.