You are here: Home › News › 2018 › 04 › 23 › Finland Offers Warm Welcome Home Retirement Gifts And A Meeting With The Former President During The Generals Visit General André Cox and Commissioner Silvia Cox, World President of Women's Ministries, were warmly welcomed to the Finland and Estonia Territory last week, where they had served as territorial leaders from 2005 to 2008.

The world leaders of The Salvation Army led a congress in Helsinki, capital of Finland, with the theme, Mission to Serve.

As part of the congress, the General and Commissioner visited the Alppikatu supported housing unit in Helsinki. Centre manager Antti Martikainen’s welcome included an explanation of the centre’s “housing first” approach. Residents have their own rental contracts and names on their letterboxes.

After being presented with souvenir “Mission to Serve” aprons (see photo below), the international leaders and the territorial leadership team served lunch before enjoying the meal with the 30 residents. 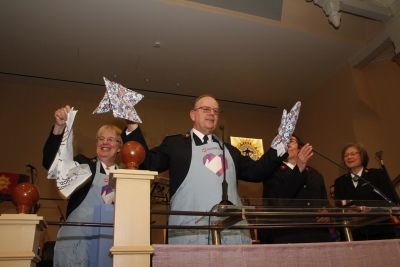 The homecoming theme continued at a reception hosted by the Helsinki International Rotary Club. The event provided an opportunity for the General – a former member of the club – to renew Rotary friendships.

Rotary President Peter Tuominen highlighted the special partnership between Rotary and The Salvation Army worldwide, with their common goals of making a difference.

The first public event of the visit was the commissioning of the two cadets of the Messengers of the Gospel session. Lieutenant Anna Vargas spoke of the journey that had brought her from Brazil to Finland before Lieut Eliel Vargas presented his testimony through a song he had composed for the occasion. 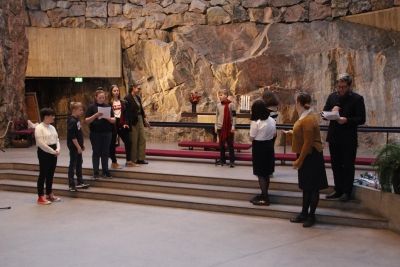 The Rock Church – excavated from an outcrop in the heart of Helsinki – proved a remarkable venue for the evening celebration, which featured a specially convened congress brass band, choir, and timbrel group. Young people from Vaasa presented a dramatic interpretation of Matthew 25.

A long-time supporter of The Salvation Army, Ms Halonen – who served from 2000 to 2012 as the country's first female president – allowed her image to be used in a 2017 advertising campaign in which she posed as a homeless person (see photo below right). 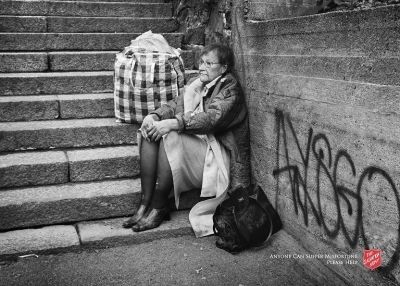 Territorial Commander Patrick Naud commented on the incredible success of the campaign and the huge interest the president’s poster had generated worldwide. In her acceptance speech, former president Halonen praised The Salvation Army’s social ministry and remarked on the continued and essential need for it to fulfil its mission.

During the final holiness meeting, in response to the General’s challenge to look forward and be Christ’s witnesses in the world today, many seekers went forward in public acts of prayer, before a spirited and enthusiastic rendition of the song O Boundless Salvation! brought the visit to a joyful close.