My hero is Rachael, the Salvation Army officer My hero is Rachael, the Salvation Army officer

Twelve-year-old Olivia (left) wrote a speech titled “My Hero” about Captain Rachael Farthing (right) who runs a kids club in Bidwill, western Sydney, along with her husband Philip (the photo-bomber!)

Salvation Army officers touch the lives of many people. Tens, dozens, hundreds in a lifetime. The impact of each encounter is mostly unknown. So, when Captain Rachael Farthing read a speech titled “My Hero” by one of the children in her Kids Club, she was shocked and humbled to realise that it was about her.

Captains Rachael and Philip Farthing minister in one of Sydney’s most disadvantaged suburbs – Bidwill – and live in government housing there alongside those they serve. For the past seven years they’ve been investing in the children and young people of their community, running kids clubs, small groups and growing young leaders.

“If you can influence someone at a young age it might influence their future and the trajectory that they take,” Rachael explains. “We try to be role models and show a different experience of life ... [we try to instil in our young people] the ability to be able to make positive decisions for their life.” 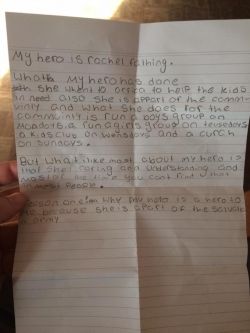 Twelve-year-old Olivia met the Farthings when she and her family moved to Bidwill five years ago. She started attending The Salvation Army’s Kids Club for primary school children and immediately felt welcomed. “I thought they were kind, they were nice and accepting,”she remembers. When she started Year Seven this year, Olivia was invited to continue coming to Kids Club as a Junior Leader.

“It means that I help Rachael and Philip if they need help at Kids Club. I help serve the food to the kids and sometimes I help them do the games,”she says.

Rachael says that despite being fairly quiet, Olivia takes everything in and plays an active part in everything the local Salvos do. She attends a weekly Community Table discipleship group for high school students and “she’s come to our church a few times and came to youth councils”.

A few months ago, when Olivia arrived to help at Kids Club, Rachael noticed her chatting with Philip. She was showing him a homework assignment – a school speech she had delivered that day. The task was to write and deliver a speech about your hero. The first line of Olivia’s speech read: “My hero is Rachael Farthing.”

Rachael says she was blown away when they showed her. “It really surprised me! It was really quite challenging and humbling and quite a surprise.”

The speech listed Rachael’s hero qualities as “caring” and “understanding”, with Olivia going on to say that “most of the time you can’t find that in most people”.

“What my hero has done: she went to Africa to help the kids in need, also she is a part of the community and what she does for the community is run a boys group on Mondays, run a girls group on Tuesdays, a kids club on Wednesdays and a church on Sundays.

“The reason why my hero is a hero to me is because she is part of The Salvation Army.”

Olivia says her speech was well received by her class at Bidwill High School and that apart from being a pre-school teacher when she grows up, she’d like to be like her hero, Captain Rachael Farthing.