'OKs' give national camp the thumbs up 'OKs' give national camp the thumbs up

An Amazing Race around the city of Sydney was a highlight of the Officers’ Kids Camp for many first-timers to the city.

Children of Salvation Army officers from all over Australia recently took part in the first-ever national Officers’ Kids Camp at the Collaroy Centre in Sydney.

The weekend featured plenty of games and activities in addition to various Bible-based talks on the theme “Uncensored – free to be me”.

There was initially some nervousness from the campers, with the Eastern and Southern Territories of The Salvation Army coming together for the first time, but friendships blossomed throughout the weekend.

“The comment I heard more than any other though, was that the officers’ kids valued being with a bunch of other people who just ‘get it’,” said Miranda Corps Officer, Captain Rebecca Gott.

“It was joyous to watch the excitement on faces, see relationships with one another develop, hear the singing of Sunday school songs at the top of their lungs, see the fun and laughter with new and old friends, witness teamwork, support and encouragement to overcome fears, and witness the gratitude towards The Salvation Army for an opportunity such as this!

“We saw encounters with Jesus, decisions to walk away from stuff, breakthroughs, healing, and the love of God experienced and outpouring of the Spirit refreshed in lives – praise Jesus!” 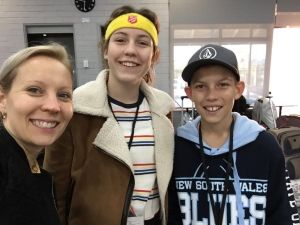 One camper told Captain Gott (pictured right with two campers) that if it wasn’t for the Officers’Kids camps over the years, they wouldn’t still be a Christian today. Another camper went home to tell his parents that up until now he thought the Salvos only needed them. But after the weekend away he felt like he was also valued.

Lieutenant Sarah Innes, Corps Officer at Mount Barker in South Australia, said the national camp “reinforced to those present that Australia One is both real and special.”

“I loved the way that we were able to acknowledge some of the challenges of being an officers’kid while also recognising the positives. With kids attending from all over Australia, great bonds were made – a great reminder to each of the kids, that they are not alone in their journey.” 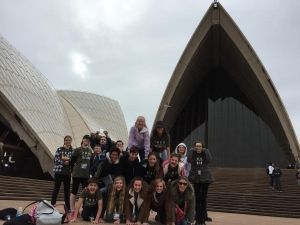 Some of the talks, following the camp theme, covered subjects like “Masks we wear”, “Being who God has created us to be” and “What’s in our hands”.

A highlight was a question and answer session with a panel including Officers’Kids Camp staff and the national leaders, Commissioners Tracey and Floyd Tidd, which used mobile technology, texts and paper to ask and respond to questions.

Some of the topics covered included “Living as a leader”, “Keeping friends”, “Feeling isolated”, “Sex before marriage”, “Alcohol and The Salvation Army”, “Self-acceptance in The Salvation Army”, “Moving house”, “Enjoying the best an officers’ kids life has to offer” and “Getting parental attention”.

Some of popular activities over the weekend included various games, a movie, a glow party and an “Amazing Race” around the city of Sydney, which was a highlight for many who were experiencing Sydney for the first time.

Captain Gott urged Salvationists to keep officers’kids in their prayers: “I would encourage you to continue to pray for OKs as they do life in the day-to-day – as you talk to them, see them, remember them – as I know so many of you do!”