Worshipping to the beat 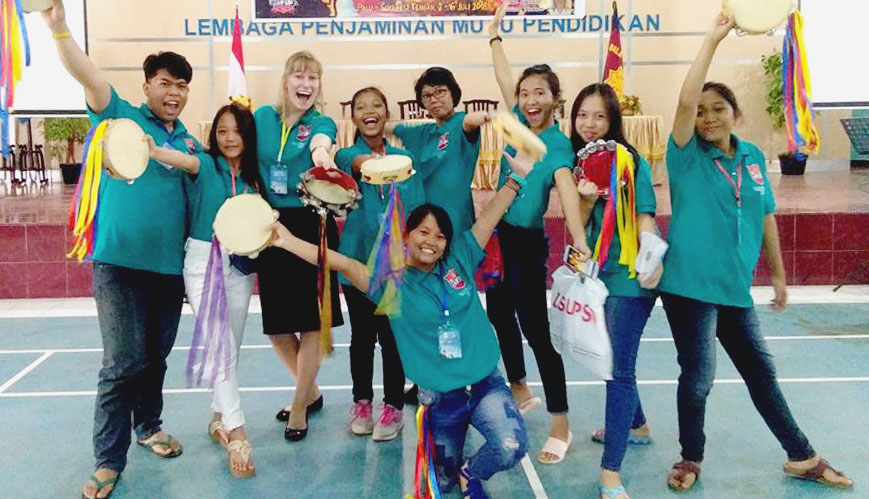 Worshipping to the beat

Jess Fanner (third from left) with a group of participants from the inaugural Creative Arts Camp in Palu, Indonesia.

How do you describe the atmosphere in a room filled with 99 young women (and one young man) playing timbrels and praising God?

Jess Fanner, of Waverley Corps (Vic.), who held timbrel workshops at this month’s Indonesian Territory’s inaugural creative arts camp in Palu, says it was “so vibrant, all the time”.

“I have no words to describe what it was like to witness God’s Holy Spirit flow through camp like a tidal wave during times of worship, prayer and recommitment,” she recalls.

The camp offered electives in choir, dance and puppets, with a special focus on timbrels. When Territorial Creative Arts Director, Ken Waterworth, contacted Jess earlier this year to ask if she was interested in facilitating the camp’s timbrel elective, she says she “jumped at the opportunity”.

“I am a music teacher, so I was in my comfort zone with the camp being all things ‘creative arts’ – but timbrels are my favourite.”

Jess has loved timbrels since she joined the YP Timbrel Brigade at Waverley Corps when she was seven years old.

“When I have a timbrel in my hand and the music starts, that’s when I see God. I have an extremely clear vision of him when I play and this gives me an overwhelming sense of joy and peace. It’s very empowering when I have this vision of the King of Kings smiling straight at me. That’s why I play.

“I also love the fellowship of being in a timbrel brigade and how a group of timbrellists can bring choreography to life.” Jess brought her skill and passion to the camp, teaching technique and choreography to delegates, who were divided into beginner, intermediate and advanced groups. Each day started morning started with a massed rehearsal (pictured right), followed by rehearsal sessions. By the third day, Jess says there were a lot of sore arms and the first aid officer had stocked up on sticking plasters to cope with the blisters.

“Four timbrel leaders from Indonesia had already learned my choreography for each group, so they helped me lead,” she says.

“I was blessed to have a number of translators on camp. Language was a barrier occasionally (when translators weren't in the room), which led to a lot of laughs; it felt like a game of charades at times!”

It was a joy for Jess to see the transformation in her timbrellists as they realised timbrel playing was more than just beating to music. Each group played to a different song – Joyful, Joyful for the beginners; Warriors, for the intermediates and Fire in the Blood for the advanced group.

“Knowing the words to the music we play to creates meaning to our timbrel playing,” she explains.

“I had the lyrics of Fire in the Blood translated and we spent time in meditation, selecting a few lines that resonated in our hearts. I asked the question, ‘What is God trying to tell you through this piece of music?’

“While I wasn't expecting it to be an emotional time, there were tears flowing as individuals recognised God speaking to them through the music.

“When the advanced group played through Fire in the Blood after their time in meditation, their display brought me to tears. I've never cried while watching a timbrel display before, but that’s the power of the Holy Spirit and what a timbrellist can do when they express God’s love through timbrel playing.”