What it means to have a home What it means to have a home

Associate Professor Cameron Parsell from the University of Queensland speaks about the issue of homelessness at an August 2018 'Stories over Lunch' event hosted by The Salvation Army's Fundraising Department.

If you find accommodation for someone who is experiencing homelessness, that’s the problem fixed, right? The answer to that was explored during a recent Wills and Bequests “Stories Over Lunch” event on homelessness held at Territorial Headquarters in Sydney.

Veronika Peters, The Salvation Army’s development director (AUE), interviewed a panel of people working to transform the lives of those experiencing poverty and homelessness.

On the panel were Salvation Army workers Kristie Clifton (program manager at Foster House men’s homelessness service in Sydney) and Glenn James (Melbourne project manager), who were joined by Associate Professor Cameron Parsell from the University of Queensland. 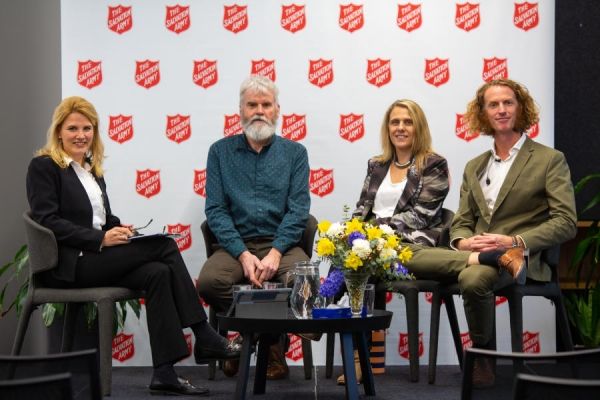 Cameron, whose primary area of research is poverty, homelessness, social services and charity aimed at addressing social disadvantage, said his passion for making a difference comes from his early career as a social worker. He saw firsthand the cycle of disadvantage, with the same people being evicted and becoming homeless again and again, despite how services tried to intervene.

“We were incapable of disrupting that cycle and I wanted to know how we could do something innovative,” he said.

His research involves travelling around the nation to understand how homelessness and extreme poverty impact people, with the aim of using that knowledge to develop innovative ways to create change.

“By spending sustained time with people in a shelter, transitional housing or on the street, we learn much more about homelessness than if we look at data detailing how much contact they’ve had with the police or an ambulance service. We learn about who they are,” he said.

“Homelessness is not an identity. It’s not something innate, it’s nothing to do with them as people. Homelessness, like poverty, is an experience they have. It’s the way we organise society, and that’s important to understand, because when we see homeless people as innately different from us, then we are able to justify inadequate responses.”

Kristie said enriching the lives of people experiencing poverty and homelessness is the priority at Foster House.

“The Salvation Army works with people that the community doesn’t want to know, see and certainly not interact with. But the key thing is that everyone is a person who has value and hope,” she said.

“My passion is to create a safe environment for the gentlemen we work with, and that means thinking outside the box. We focus on solutions; what do we need to do to help them reach their goals and aspirations? Is what they need now the same as last week? Their needs change like ours do.”

Glenn started his 27 years with The Salvation Army working in night shelters before going on to spend 16 years in management. He recently chose to go back working where his passion lies –on the front line. He’s seen a lot of change over the years; in 1991 people experiencing homelessness were mainly older men, with the average age being 49. In five years that changed to 34.

“I can remember when 18 and 19-year-olds started coming through,” Glenn said. “It was a shock.”

The older men he worked with had experienced life before falling on hard times, but these young men had had their lives taken away from them, their foundation years betrayed by others through physical, emotional and sexual abuse. Now, in another growing demographic shift, for the first time in their lives, women aged 55 and over are entering homelessness services.

“Having a place to stay is fundamental but that’s not all it’s about,” Glenn said. “A focus group of people who’d found accommodation after rough sleeping gave largely negative responses. It’s hard to adjust. When they have accommodation and are left to themselves, they’re often at a loss. People need to be connected; they need a sense of safety.”

Cameron agreed, saying when he talked to people about “home”, the concept meant far more than having a roof over their heads. He said most people he talked with wanted to have a meaningful place in society where they were not just a recipient of someone’s care but provided care for others.

“The long-term impoverished are saturated by ineffective services trying to do well. We’re a presence in their lives but not actually changing things, partly through structures and inadequate housing supplies, but also because we’re not enabling people achieve the fundamental elements of “home”–the control over their own lives, autonomy and achieving a community for them where they feel valued,” he said.

“The Salvos I work with are saying, ‘We don’t want to just do stuff because we’re motivated by right reasons (and they are), we want to make sure our motivation, our faith, our principles, our commitment to justice are having an impact’. The research I’m doing is trying to contribute to that, to ensure good intentions are translated into practical theology that makes a difference.

“If we keep people in these impoverished conditions, we trap them from being able to realise their innate humanity –that was something Catherine and William Booth understood and wrote about 150 years ago.”