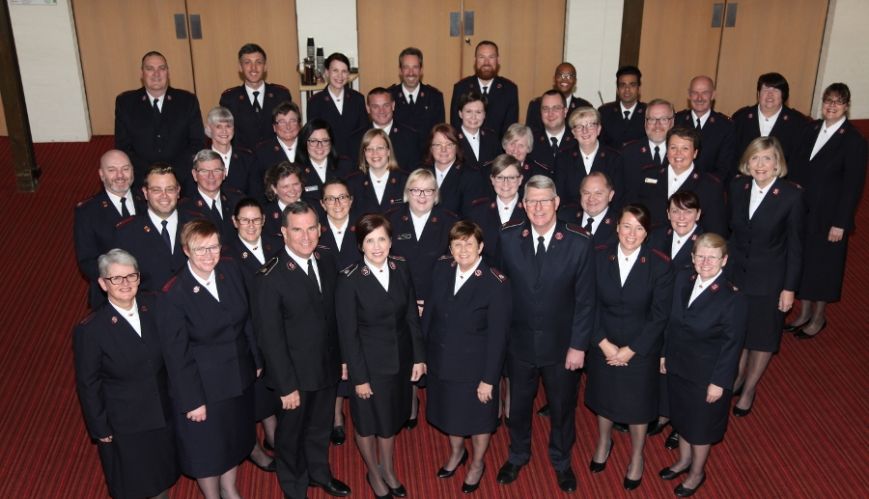 Lieutenant-Colonel Karen Shakespeare was the international guest speaker for this year’s National Brengle, bringing insight and teaching on the theme of “Foundations of Holiness”.

Lieut-Colonel Shakespeare, from William Booth College in London, headed a group of nine faculty members who took the 32 delegates through the Brengle process of: being renewed in their faith, being refreshed in their dedication and service to Jesus Christ, allowing the Holy Spirit to lead them into a new passion for his indwelling, and; embracing holiness as the foundation of their relationship with God.

The colonel has served in a variety of appointments at corps, DHQ and THQ level, and as Principal of SALT College of Africa. She is currently the Assistant Principal of Development at William Booth College and is also the Chair of the International Theological Council, having been a member since 2003.

“It was a privilege to have Karen sharing with the delegates throughout the Brengle experience,” said Captain Amanda Hart, Warragul Corps Officer and Divisional Social Justice Coordinator for the Victoria Division.

“Her commitment to officer development has been enriched and sharpened by practical experience and academic study; she believes that who we are, what we know and believe, and what we do blend together to form us and bring growth.

The National Brengle journey into holiness was based on 1 Peter 1:15-16, which states, “But just as he who called you is holy so be holy in all you do: for it is written: Be because I am holy.”.

In addition to Lieut-Colonel Shakespeare’s talks, delegates through times of teaching on various other aspects of holiness including “Holy Leadership” with Major Gregory Morgan, “Spiritual Formation and Holiness” with Major Faragher, and “Holiness in the ” with Major Robinson.

There were “pitstops” along the way, including personal reflection, sharing in small groups, prayer, worship, spiritual disciplines and sharing in significant times of vulnerability and openness in “Moments of Grace”.

“For the delegates and faculty, Brengle was indeed a time of refreshment, renewal growth in passion for the indwelling of the Holy Spirit,” said Captain Hart. “It was also a time of coming together, forming new relationships and building on old ones.”

“At the end of the 10 days, delegates left feeling as though this was only the beginning of the journey, excited about the impact these few days would have upon their ministry and expectant that God would continue to work within and through their lives.”