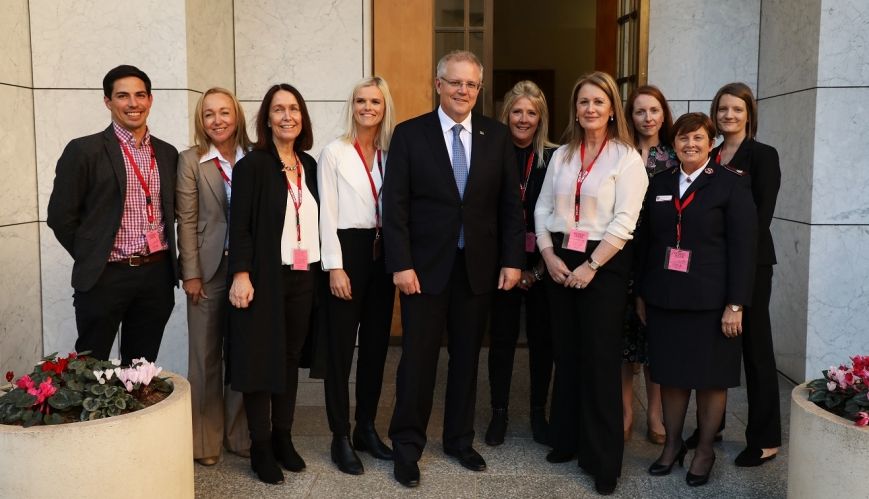 Colonel Julie Campbell (front row, right) was part of a group of women leaders from a range of Christian churches and organisations who met with Prime Minister Scott Morrison and other senior politicians in Canberra yesterday.

By Simone Worthing and Gareth Russell

Colonel Julie Campbell, National Advocate for Gender Equity, joined women leaders from across the denominations of Australia’s churches and Christian organisations in a historic visit to Canberra yesterday.

In addition to advocating for policies of justice and care for the world’s poor, the cohort met with senior ministers and members of parliament from both political parties, including some women MPs, to thank them for their public service and to encourage them to lead Australia in continuing its commitment to creating a just world.

"We were even able to meet with the Prime Minister, Scott Morrison," said Colonel Campbell.

Micah Australia Executive Director Tim Costello facilitated the coalition group, not only to bring Christian women leaders together with a unified voice, but also for talks with politicians about women in leadership.

"It is timely to be standing with Christian women leaders here in Canberra and speaking with one voice about our commitment to justice and care for all Australians and those in the global community who call for our support," said Colonel Campbell.

"This includes hearing and amplifying the voices of the children detained with their families on Nauru. The Salvation Army and Micah Australia stand together in encouraging our national leaders to act with decency and compassion towards all who reach out for help.

"It is so important for all Christians to be aware of issues and policy, to continue to be generous in caring for others, to be a voice for those experiencing hardship and injustice both here in Australia and overseas, and to serve alongside others."

As part of the trip, the Christian women leaders’ delegation also met key ministers and shadow ministers at Parliament House. They put forward the case for continued support for the overseas aid budget and supporting some of the poorest and most vulnerable families around the world.

With only 60 days to go until Universal Children’s Day, the leaders also advocated for the release of children and their families from Nauru, joining over 100,000 people who have supported the Kids Off Nauru campaign.

“Too often, the church is known for its internal disagreements that become public, but to have women leaders joining together from across the denominational spectrum shows a significant act of unity and one that we hope will be an encouragement to the government and opposition.”

Costello, who will lead Micah’s annual conference, Voices for Justice, again this year from 1-4 December in Canberra, also sees this as a unique moment both to address cultural divisions and to unite women leaders who are influencing the country as Christians of influence.

Micah Australia is a coalition of churches and Christian organisations, including The Salvation Army, raising a powerful voice for justice and a world free from poverty.

“This visit brings representatives across the church together to advocate for some of the most vulnerable citizens in the world by sharing our vision for a more generous and fair Australia,” Costello said.

“Social justice is at the heart of our mission, and we believe at the core of who we are as Australians. We also want to take this opportunity to thank these politicians for all their hard work and their ongoing efforts to serve their local communities.”