Major Wendy Watts (4th from left) with candidates and students in Phnom Penh, Cambodia, during a recent education session there teaching Spiritual Formation. Majors Norm and Beckett with students in Phnom Penh.

The Australian officers were invited by the Korea Territory, which oversees the work in Cambodia.

Major Watts, Personnel Secretary in the NSW and ACT Division, who returned from Cambodia earlier this month, focused on the basics of Spiritual Formation, including spiritual disciplines, to help the students develop a deeper spiritual life.

The majors taught through translation into Khmer.

“It’s a very young Army (in Cambodia), which was only officially recognised as a church in November 2012,” Major Beckett explained.

“The students came from a range of backgrounds, so I took it slowly, talked about the influence of John Wesley on The Salvation Army, made clear our positions, and gave them plenty of opportunity to ask questions. 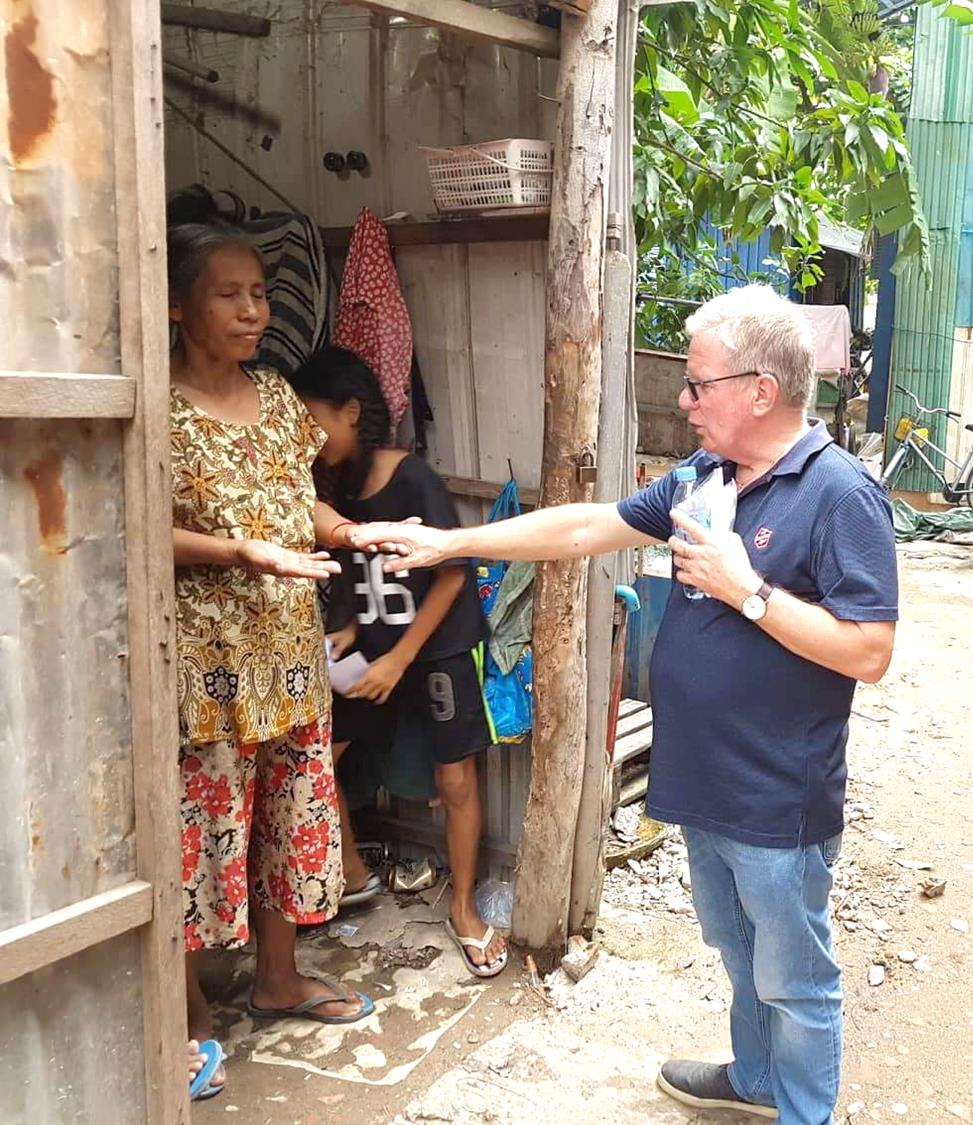 Major Norm Beckett prays with a lady in the Phnom Penh community.

“They were very encouraged by our sessions, as we were to see their enthusiasm and desire to learn.”

The Becketts visited the Phnom Penh Corps in the nation’s capital, and two smaller outposts in more rural areas. They also spent time in the slum areas around the corps where they prayed with a number of people.

Major Watts delivered five sessions over four days to eight envoys and seven other leaders. These included candidates and others who have either finished Bible College or are currently students.

“These are the potential future officers,” Major Watts said. “Their response was very positive and encouraging and they seemed to really grasp the subject and what I was talking about.”

Major Watts also spent time with the Korean officers who lead the Army’s work in Cambodia.

“It was so valuable to learn about the culture and history of the country, and how the Army operates there,” she said.

“It’s a young country in terms of the age of the population, and the hope is that the young people will lead The Salvation Army into the future.” 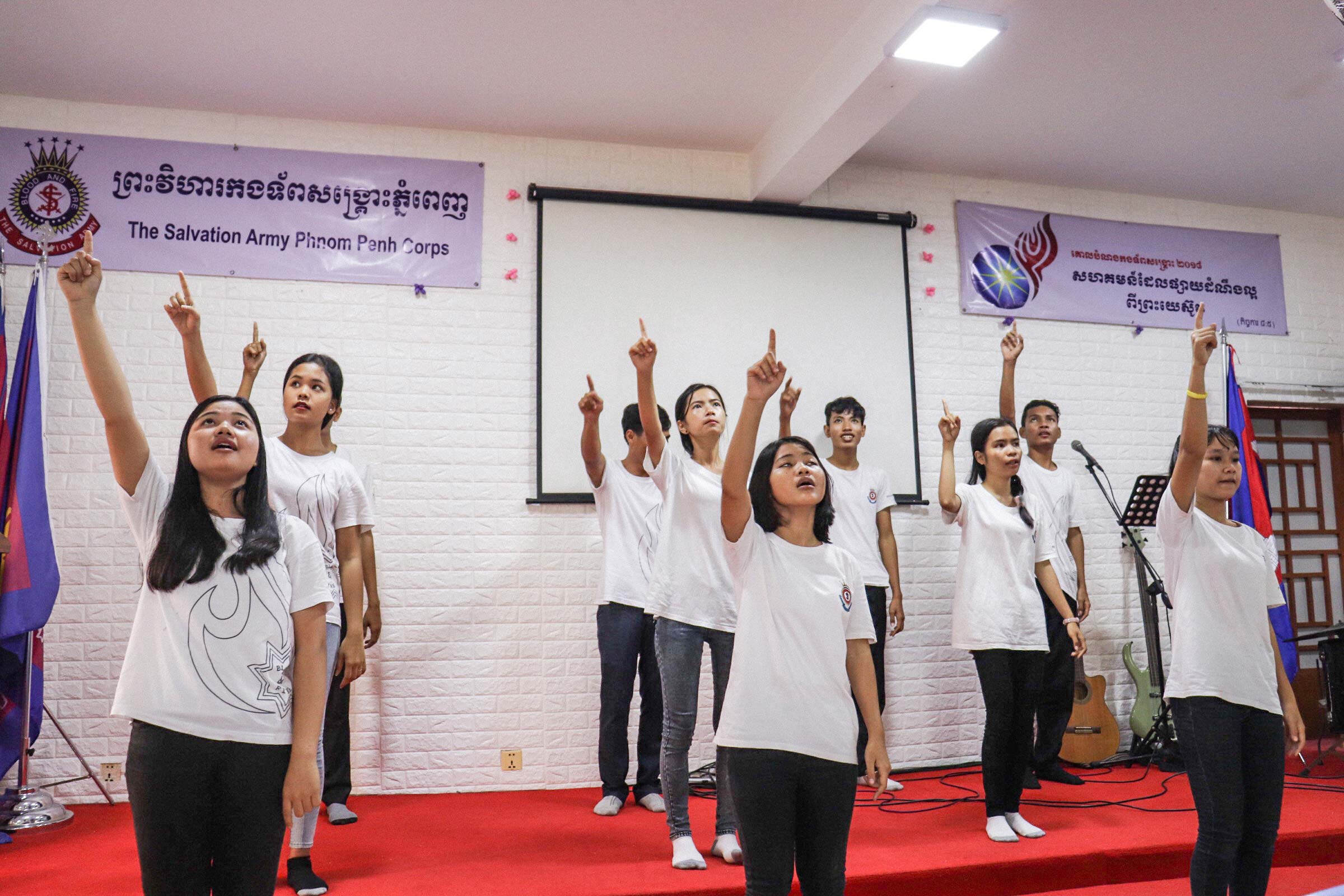 A “sister corps” in the Korea Territory helps support each of the Cambodian corps and outposts.

Majors Shin JinKyun and Lim Hyang began The Salvation Army’s work in Cambodia in 2011, and are the Korea Territory representatives in Phnom Penh.

Almost 95 per cent of the population in Cambodia are Buddhist.

The Cambodian Salvation Army runs a peppercorn farm on two hectares of land as part of the Kampot Corps (outpost).

Envoys and outpost leaders Dy Tuon and Lea Srey do the daily farming, while Major Shin oversees the farm.

The enterprise is part of a cooperative. Sale of the peppercorns is helping to fund The Salvation Army’s work in the country and there are plans to export them to Europe in the future for a better price. 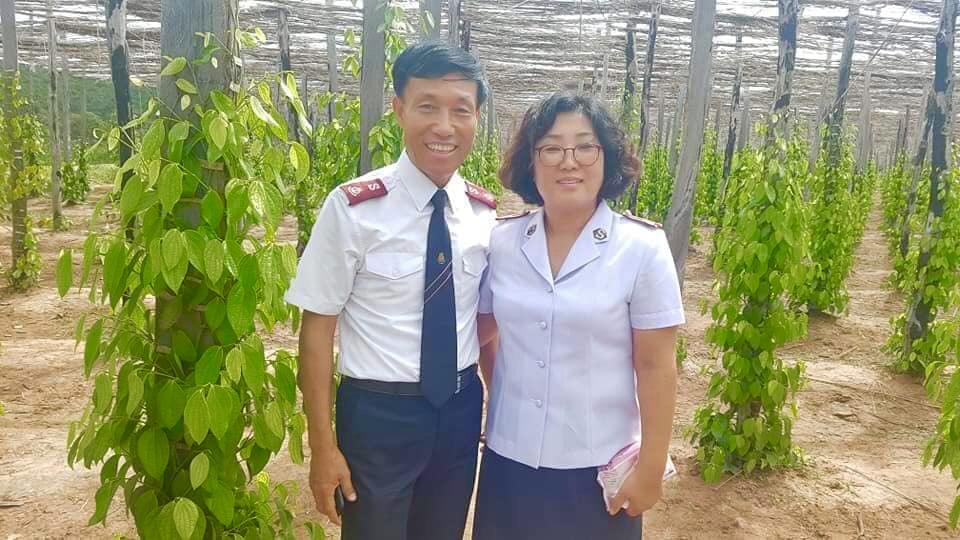 Majors Shin JinKyun and Lim Hyang at the peppercorn farm.

“The Cambodian Salvation Army have dreams for the future, including establishing their own training college,” Major Watts said.

“At the moment, those wanting to be officers typically go to Bible college for four years then receive further education through weeks like the one Major Norm and I have just conducted, covering Salvation Army distinctives, Wesleyan history, Spiritual Formation and Social Services.

“They would also like to run something for orphans as there are many street children begging on the streets, as well as something for ageing Cambodians where they can be housed on land and grow their own crops.”

The Korea Territory greatly appreciates the support given to them by The Salvation Army in Singapore and Australia, as part of the South Pacific and East Asia Zone.