The power of a parkrun 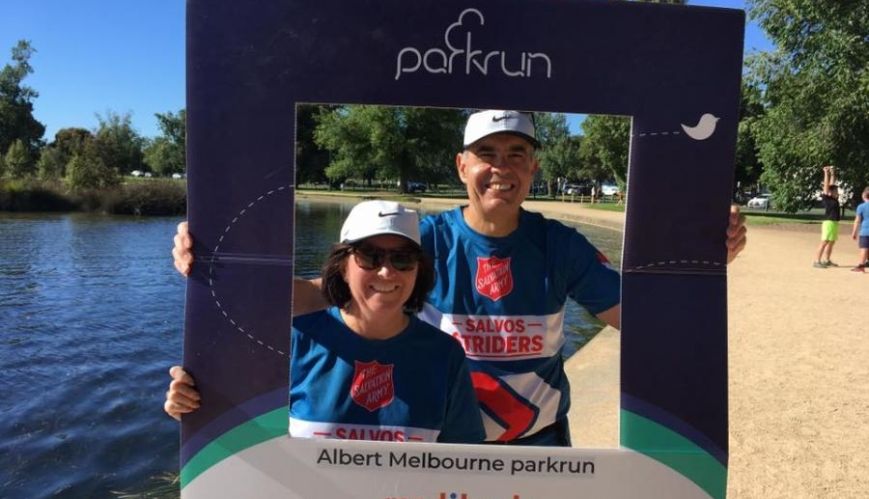 The power of a parkrun

Salvation Army Captains Darlene and Dale Murray have helped to set up 10 .

The Salvation Army’s running club, Salvos Striders, had a big presence at Melbourne’s Albert Park  on the Saturday of the Still Others event.

Salvos Striders is a running club set up a few years ago to encourage Salvationists and friends in their running pursuits, as well as inspiring Salvos to use running as a spiritual discipline and missional activity. Running has “taken off” as a sport across Australia over the past decade, and many Salvos are part of that trend.

“It’s really great actually to see how many Salvos are into running and in their own way they’re able to into where they are,” says Captain Darlene Murray, the Toowoomba Corps Officer. “We are all part of the church and we all take the church with us when we go running. We can share our faith, no matter where we are and what we’re doing.” 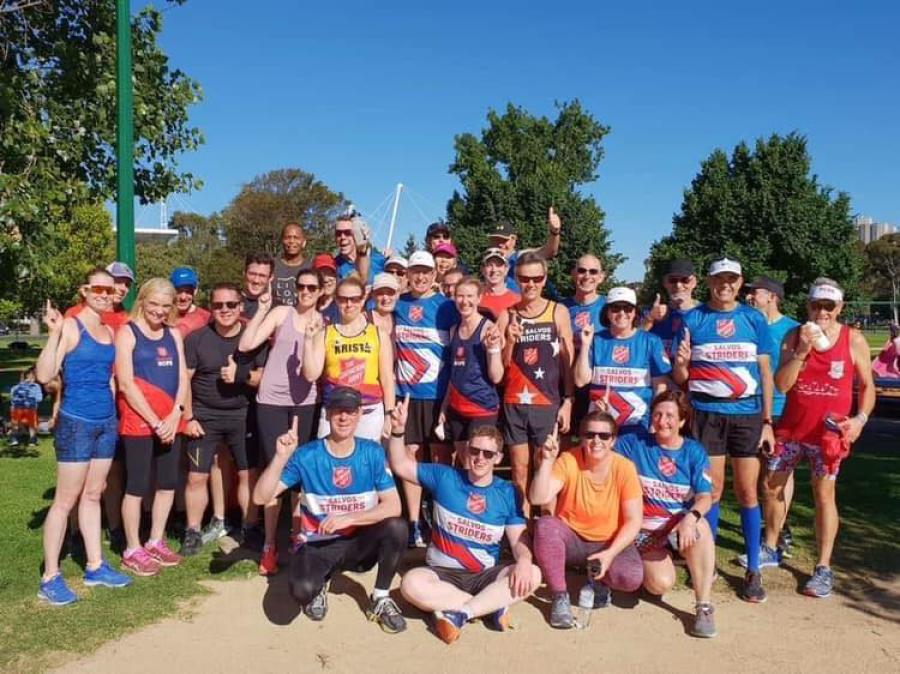 The Albert Park in Melbourne during Still Others.

Every Saturday morning, she and a few hundred other Salvos Striders don their Striders running shirts and head to , a hugely popular, free, all-inclusive  event, run by volunteers at hundreds of locations across the country (and around the world).

The event is a run, jog or walk (not a race) with the focus on participation and encouragement. People of all ages and abilities can participate at their own pace.

“I’ve been involved with  for five years now,” says Captain Dale Murray. “I’m on the  Australia board and Albert Park [on the Saturday of Still Others] was different that I’ve actually run and my 253rd  overall.”

Ben Clapton, the Rochester Corps Officer (Victoria), ran the Albert Park  on the anniversary of his commissioning. It was his 50th  and the day he received his promotion to ‘Captain’. runner, Wendy Glen, an adherent at Box Hill Salvos in Melbourne, believes so strongly in the power of  that she helped her corps set up a  event at Gardner’s Creek.

“We see a really strong alignment between  and The Salvation Army in making healthier, happier communities, in seeing people as whole people rather than just evangelism opportunities,” she says. Each  provides an absolutely unique opportunity for people to become physically healthier, as well as socially better connected.

“There are many, many people in our society who just want some company and to feel part of something, and whilst many of them wouldn’t set foot in a church, they will come and walk five with you and have a cup of coffee. So, we started Gardner’s Creek , very near Box Hill Corps near Deakin University in Burwood, because there was in the [parkrun] map and we could see a need!”

And, she says, The Salvation Army’s increased presence at  events across the country fits perfectly with the announcement at the Friday night Still Others meeting that The Salvation Army is committing itself to new corps and faith communities across Australia.

“When I heard the planting of new churches in the community, for the community, with the community, seeing people as whole people, wanting to make the world a healthier, happier, better place – my first thought was, ‘How many  are we planting alongside those new plants?’” 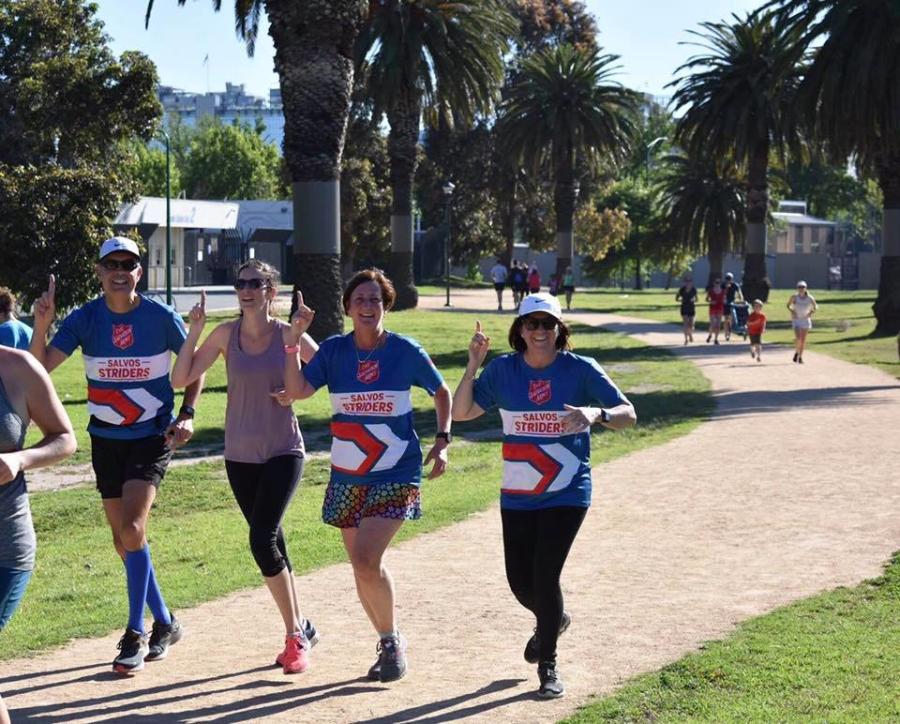 Captain Dale Murray agrees. He has been involved in the creation of 10  events, with his latest in South Toowoomba. He says is naturally forming through connections made at the weekly event. “We have already had some pastoral issues that we have been able to help people with who are . A lady had a stroke and we helped journey with her, and also another lady had a kidney transplant and we journeyed with her through that. That was all through where we formed a relationship with them.”

Captains Dale and Darlene are prayerfully planning to plant a new congregation of and other like-minded people within the coming year, but it won’t be about filling more seats on a Sunday: “I can see a faith community developing as a gathering you know, on a mid-week night when people are available. Sunday morning, they’re all out running because it’s beautiful running in and they love it. So, I see a faith community but not a traditional 10 o’clock service on a Sunday. It’s going to be exciting to watch this space I think!”

Major Bryce Davies runs at Cooks River in Sydney, NSW, with his wife Major Sue Davies volunteering. He just happened to run into another runner at Melbourne’s Albert Park  from his local area. “I was getting my photo taken in the  selfie frame and I asked this lady if she’d take the photo. It turns out that she was down from Sydney and does the same  as me at Cook’s River so we’re already buddies!” 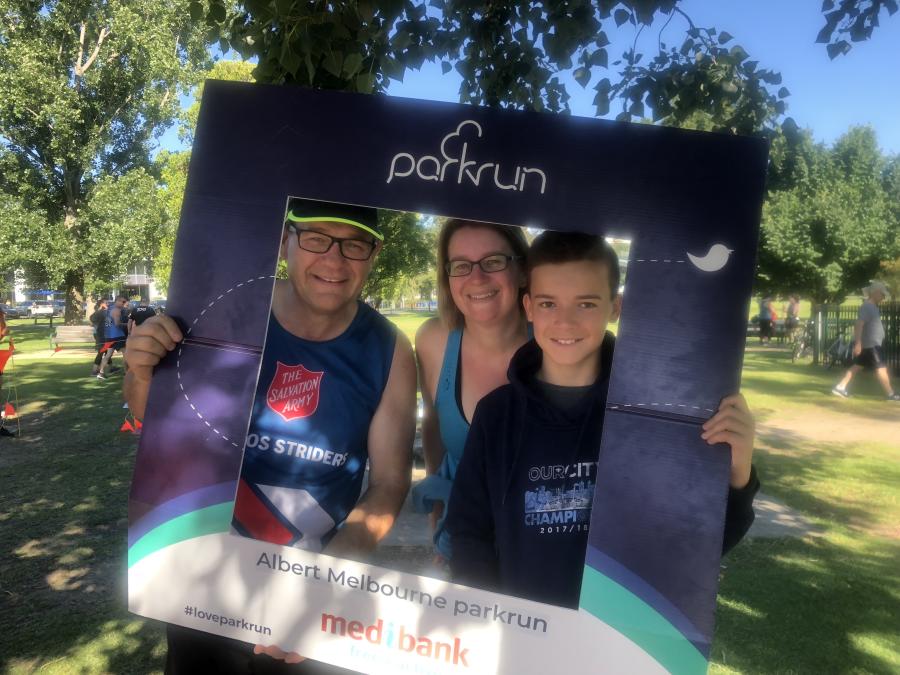 The woman, Rachel Hunt (pictured right with Bryce), says the group of Salvos Striders at Albert Park is the first group of Salvation Army runners she’s ever seen, and she’s looking forward to connecting again with Major Bryce at their local .

“[parkrun is] a great way to meet other people. You can volunteer, you can give a little bit back to the community. I do it with my son, sometimes both my sons, sometimes I’m with a group of friends. It’s fantastic, I love it!”

Find out where your nearest  is: parkrun.com.au
Find out more about Salvos Striders on Facebook.