Salvation Army Emergency Services (SAES) teams in Townsville have been activated to support catering operations in an evacuation centre at Heatley High School due to significant monsoonal flooding affecting the area.

The teams are anticipating additional centres to open requiring catering and support, and all SAES teams from Mackay north remain on standby. 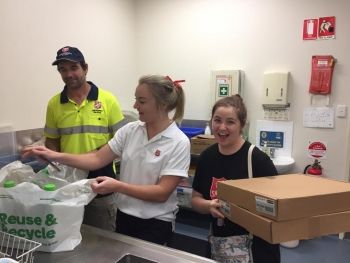 Preparing food at the evacuation centre.

The monsoonal rainfalls are impacting the North Queensland region from Cairns to Bowen. To date, Bluewater and Giru, small towns north and south of Townsville, have been the most heavily affected. Townsville, however, is now a major concern as heavy rains continue and water is released from an overflowing dam.

The situation is expected to worsen over the weekend and into next week as the monsoonal trough starts moving north. Very heavy falls with possible flash flooding are likely about parts of the coast and adjacent inland between Innisfail and Bowen.

Disaster declarations are in place for several council areas in and around Townsville. The extent of the impact is yet to be determined.

“It’s still too early at this stage to know what recovery response will be required, but as we respond now we are also looking at the areas being impacted, and where there is potential for impact, so we can forward plan.”

Captain Brad Whittle, manager of Townsville Recovery Services Centre, said it had been challenging just getting enough food to prepare for the evacuation centre, with food trucks facing complications getting to Townsville, and many people panic buying.

“We now have a trailer down on the site so we can do some low-level catering,” he said. “We are setting up a roster for volunteers and having rolling teams, so everyone gets a break. It’s a bit flexible at the moment. We are doing all we can to create a positive environment for those who come here.”

The Red Cross is managing the evacuation centre.

“What The Salvation Army does in emergency situations is not just about the SAES teams, but a whole range of Salvation Army services and expressions that support each other to help the local community,” said Major Topher Holland, General Manager Strategic Emergency and Disaster Management.

“Our focus is on giving help and hope where it’s needed most and meeting people at their point of need.”

The Salvation Army is also working with other agencies to make sure people’s needs are met as quickly and efficiently as possible.