'Sallyman' soldiering on in flood-hit Townsville 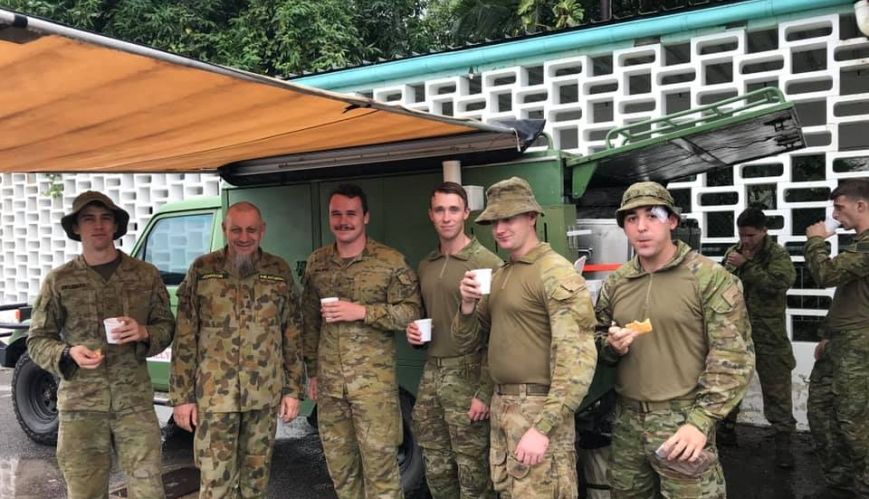 'Sallyman' soldiering on in flood-hit Townsville

By Simone Worthing in Townsville

Since the monsoonal rain started to pound Townsville last week, the four Salvation Army Red Shield Defence Services (RSDS) representatives based at Lavarack Barracks have been working a rotating roster to make sure a “Sallyman” is out in the community supporting Australian D Force personnel, and on the Army base in the evacuation centres there.

Major Nigel Roden, RSDS Officer in Charge at the barracks, is coordinating the team.

As Australian Army soldiers support the community, often chest-deep in mud and wet for days, the Sallymen, and Sallywoman, have been offering hot drinks, food emotional support.

Major Penni Roden, RSDS representative Family Support Officer, and the Rodens’ three children themselves last weekend and have been living in the evacuation on the base.

“I had been out on the road finding groups of D Force members who needed support when I was caught on the main road going through Townsville, which was cut by deep-running water,” said Penni.

“I pulled into the depot where the Army vehicles were and learned of the inundation of water due to the opening of the dam. On my way back to base I ran into the 3rd Combat Engineer Regiment that I support, and they evacuated me with the other civilians they were taking back to the staging area to find community evacuation .

“All this under the heaviest rain I have ever seen in my life. The 4th Regiment guided me back across the bridge and I drove through water that came over the on the truck.”

Many D Force families live in the Townsville suburb of Idalia, one of the hardest hit by floodwaters. Some families have lost everything. Over the next few days, many families will return to their homes to see what damage has been done and clean-up and recovery will begin.

“We will be offering a lot of support to affected families over the next few weeks,” said Penni. “Recovery will take months. 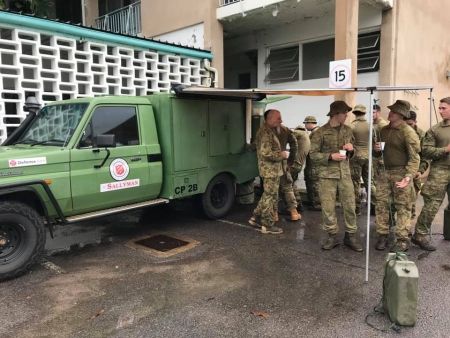 The Sallymen provided support for D Force personnel during the floods.

“Defence Force families and local community members have poured out their love and generosity, filling the community on base with donations of toiletries, towels, clothes, shoes, toys and baked goods. We’ve made sure that everyone impacted by the floods has received some of what they’ve lost.”

Up to 15 families – 20 adults and 35 children – plus a few pets have been in the evacuation on the base.

“There have been some light moments and laughter,” said Penni. “I’m proud of my kids –they took the younger kids under their wing and played with them while the adults talked and cried.

“We have linked the families into support on the base such as the padre (chaplain) and to government grants. We are also letting them know how The Salvation Army in the community can help as well.”

The evacuation at the base closed on Wednesday night and those remaining families there were transferred to the Heatley evacuation centre where Salvation Army Emergency Services (SAES) volunteers are catering.

Once the water has subsided enough for most people to return home and electricity is restored the huge job of clean-up will begin. Many people have already begun.

“Our primary role will be to ensure that the welfare, support morale of Australian Defence Force members and their families as high as it needs to be,” said Penni.

“Many have gone through traumatic experiences – like the family who spent Sunday night on their roof until they were rescued on Monday morning. Others have left everything, walking through chest-deep water with their kids on their shoulders.

“ I said to the Commanding Officer of 1 Rar (Royal Australian Regiment Infantry Battalion in Townsville), that soldiers are human beings, he gets to tell them what to do; I get to touch their souls.” 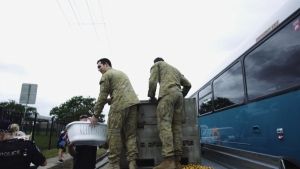 RSDS representatives are supporting others while tired, exhausted and dealing with the impact of the floods in their own homes and families.

Major Brett Gallagher, RSDS Chief Commissioner, is arranging for other Sallymen in the national team to come to Townsville to relieve the local representatives. Auxiliary-Lieutenant Vaughan Agnew is on his way from Adelaide.

“We don’t want our local reps to burn out, but we are focused on sharing the load across the whole team as we move into the clean-up phase,"  Gallagher explained. "They have done a superb job, being isolated and trying to work 24/7 to do two big tasks with such resilience and devotion.

“We hear all the stories of what the Sallyman did during the wars; our reps, they have carried on in that same spirit in very difficult circumstances.”

The soldiers appreciate the work of the RSDS. One said: “We can’t thank the Sallyman enough. Despite Garry Johnson’s own house in Idalia being flooded last night, he set up in a dry spot to hand out some coffee to the troops.”

Major Garry Johnson, an RSDS representative with the 3CSSB unit, has been helping D Force staff, as well as dealing with his own evacuation and the flooding of his home.

When the worst of the flooding was happening on Sunday, Garry’s house had more than half a of water rush through it.

“I was at home with my wife Jo and in the afternoon, we heard the water lapping at the door,” he shared. “We’d heard that the dam gates were to release more water so we knew it was time to get out.

“We couldn’t get the car out, the water was too deep, so we waded in waist-deep water, carrying our two until we got to higher ground.

“Once we came out, the Army guys were there to evacuate people. Since then, we’ve been out on the base supporting the troops doing other activities and went back to the house on Tuesday. There is a fair bit of clean-up to do, but it’s a matter of getting time to sort it out and continue to support the soldiers.

“Once our RSDS relief reps come to give us a hand or two, we can concentrate on serving the military.

“Many of them are out supporting others and their houses have been flooded as well. We're not unique in what has happened to us. Everyone is safe and that’s the most important thing.”