With the sun now out in Townsville, the clean-up continues in the devastated city as the floodwaters continue to recede and electricity is gradually restored to thousands of homes.

Residents are hosing out homes caked in mud, moving damaged goods onto front lawns for collection, assessing the damage of what remains, and looking to what the future holds.

“To me it seems that Townsville has hit rock bottom with this, but we will rise again,” said Angie, whose home was inundated with floodwaters. “Our grateful thanks to The Salvation Army and all the other agencies, local people, and the government who have pulled together to help us all come through this.”

Major Garry Johnson, a Salvation Army Red Shield Defence Services Representative, has been helping Defence Force staff, as well as dealing with his own evacuation and the flooding of his home. Read more HERE.

Major Johnson and his wife, Jo, have been cleaning out their home and sorting through the piles of ruined furniture, household items, and personal belongings (pictured right), most of which will be taken away in the first few days of this week. “It’s tough, but God was in our coming to Townsville and he is still with us,” Major Johnson said. “We will get through this. It’s already helped me build stronger relationships with those I work with, and others as well. Now I just want to get out there and help the soldiers and in the community.”

Salvation Army Emergency Services (SAES) teams have concluded their work at the evacuation centres, with the last one at Heatley High School closing after breakfast on Sunday. SAES volunteers have been redeployed to the Murray Sporting Complex recovery hub to provide a sausage sizzle for the many people seeking assistance there.

Extra staff have also arrived to assist at the recovery hubs, where The Salvation Army is supporting the formal request for assistance from the Queensland State Government (Community Recovery Branch).

The teams, spread across five hubs, have been assisting hundreds of local residents with immediate financial support through supermarket, EFTPOS and universal gift cards. They are also providing a listening ear, emotional support and encouragement to people, many of whom have lost everything in the floods. 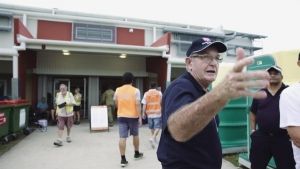 “It’s not a lot for people who have lost so much, but people are just so grateful to receive something in their hands here and now,” said Major Sue Hopper, Acting Area Officer, North Queensland.

“Many are overwhelmed and can’t believe what we’re giving them. A few of the men have cried too, with one woman telling me that her husband never cries.”

Lieutenant Chris Ford, Gladstone Corps Officer, said that the team is giving dignity to residents who are struggling with so much. “We’re advocating for those who’ve gone through trauma, and for those who have to deal with this on top of other life situations that are ongoing,” he said.

Captain Wes Bust, Fassifern Corps Officer, shared that one local man who with his partner just wanted the resources to buy formula for their baby, was in shock at what The Salvation Army was giving them, while another lady, extremely distressed, gradually shared her story that was “dripping with injustice”.

“This is where hardship was today,” said Captain Bust. “It’s a privilege for us to walk alongside these people.”