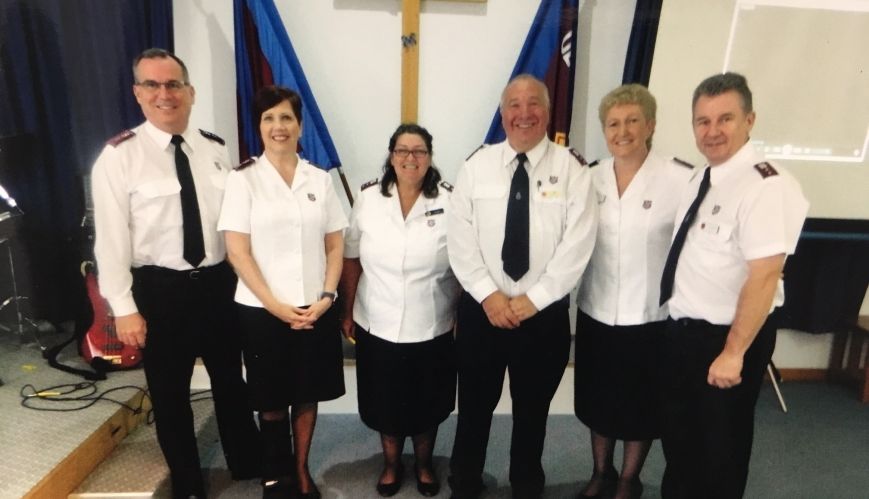 Australia’s territorial leaders, Commissioners Floyd and Tracey Tidd, have installed Captains Kim and Steven Haworth as leaders of the Tasmania Division during a tour of the state.

The Welcome and Installation meeting was held on 20 January at Hobart Corps, where Commissioner Floyd Tidd spoke about the beginning of a new season for The Salvation Army Australia and the Tasmania Division. Captain Kim Haworth preached on Paul’s “glorious obsession” with the Gospel, encouraging all Salvos to embrace the mission of the Army with the same vigour as the Apostle.

“As Salvationists [we are called] to have that same glorious obsession with our new national vision and the mission that God invites us into every day ... to live, love and fight alongside others, transforming lives with the love of Jesus,” she said, echoing the National Vision Statement.

Prior to the installation, the commissioners visited Derwent Valley Corps, where about 70 people welcomed Kim and Steven into their new appointments and shared worship with the national leaders.

Captains Di and Tim Size, the Derwent Valley Corps Officers, said the visit was timely as the state entered a new era under one Australian Territory.

“As a family we were just beginning to look at the year ahead so Commissioner Floyd’s message about ‘new beginnings’ was very timely for Derwent Valley Salvos in their ‘living, loving and fighting together’ in 2019,” Di said.

Leadership has been in full swing for the Haworths, with the coordination of Salvation Army Emergency Services resources to assist communities affected by bushfires in Derwent and Huon Valleys.

The Haworths also celebrated the installation of solar energy at Divisional Headquarters, where a 63-kilowatt solar system will help the Army save $20,000 a year on energy bills while also benefitting the environment.

Kim later represented the Army for the launch of the Glenorchy City Council’s Revitalisation Project. Joined by the Moonah Corps Officer, Captain Jeff Milkins, and Social Enterprise Coordinator Bridget van de Kamp, the planned relocation of the Moonah Corps into the CBD of Glenorchy will see an increased missional presence in the hub between the Derwent River, Mount Wellington, Hobart and Brighton.

“We are excited to be leading the Tasmania Division in this new season for The Salvation Army Australia Territory,” said Kim.

“We look forward to joining with God and others in this beautiful place, to continue the great work being done to transform lives with the love of Jesus.”