The new Macarthur Corps was launched on Sunday 24 February, a coming together of congregations from Narellan Corps and Campbelltown Corps.

Lieutenant Nicola Poore, the Corps Officer, spoke at the launch about the message of Moses to the Israelites in the book of Numbers, after they were gripped with fear when their spies came back from the Promised Land. “We can step into the promise of God when we face our fears and put our faith in him,” she said. “Will there be challenges? Yes. But are those challenges insurmountable? No, because God is with us.”

The corps is meeting at The Salvation Army building in Narellan until a permanent location is found.

Captain Robyn Black, the Area Officer, said the feeling was one of excitement as new relationships were being forged. “It’s an exciting time for the south-west,” she said. “The meeting on Sunday was significant and poignant and it was good to mark endings and beginnings.” 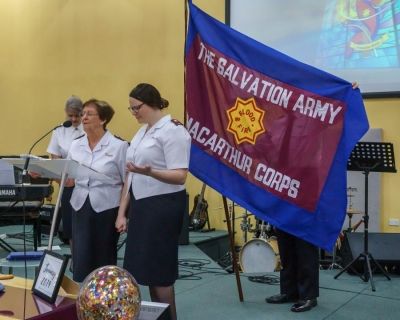 Lieut-Col Jan Laws prays for Nicola at Corps launch.
Macarthur Corps is just about to launch a new ministry as a ‘connect site’, and has expanded its street outreach. “Things like this are exciting because we get to start this new ministry together,” said Nicola.

Lieut Poore, alongside Lieut-Colonels Jan and Peter Laws (Transition Officers), have also been focusing on pastoral care and encouraging people from both Narellan and Campbelltown Corps to be involved in existing or new ministries.

“The best way for people to feel involved, and to feel part of their local corps is by serving together,” she said.

Also working in the south-west Sydney area, and focusing on the city of Campbelltown, are new Communities of Hope Salvation Army officers, Majors Belinda and Lynden Spicer.

The Spicers felt a calling from God last year while attending an Exponential church-planting conference in the United States.

“It wasn’t on the radar for us at this point of time in our lives,” said Belinda, adding that she and Lynden were happy in their roles as Area Officers at the time.

“On the very last day we heard an amazing speaker that had brought together everything that the conference had talked about in terms of planting churches, the next generation, home church, starting small, gathering a team and influencing people’s lives with the gospel and just seeing lives transformed. It really struck a chord with us. At the end of that last day, they had a time of prayer and anointing ... and we went out as a couple and the guy prayed for us, and he prayed over us about planting a church.

“For me, personally, there was a huge overwhelming sense of the spirit, so much so that I started to weep. I knew that God was calling me to something different at that point in time, and it was about looking at planting a church and even investigating what it would look like to start up a home church.” After returning to Australia and praying over it more, the Spicers approached their divisional leadership to ask for a release from their roles as Area Officers and move into organic church planting. A few months later, they were appointed to the Macarthur region of south-west Sydney, an area that they had been serving in for nearly 10 years as Corps Officers of Greater Liverpool Corps, and then Area Officers.

The Spicers started their new role in January this year and have been making connections in the Campbelltown area, prayer-walking and doing street ministry. They feel that God is calling them to the central part of Campbelltown and have a vision for a thriving community space that might house a café, Doorways and other support services, as well as a mid-week chapel and being a safe, loving place where everyone is welcome.

“One of the needs that is high on the Richter-scale in this area is that people are really, really lonely,” said Belinda about the need for a Community of Hope. But despite having a clear vision, the Spicers say they’re not rushing into anything. “I think we’ve got enough experience to know that we want the ‘God idea’and not the ‘Good idea’. After being officers for 28 years we know that we really need to hear what God wants, rather than set something up that’s just a good idea.”

Also breaking new ground in the organic church space in south-west Sydney are Lieutenants Jacqueline and Matt Gluyas, who attended the same Exponential Conference as the Spicers.

They have been given the task of planting a new Salvation Army faith expression in the Oran Park/Badgerys Creek area, a vast expanse of planned housing that will be close to Sydney’s proposed second airport. They say the expression is growing naturally through relationships: “Intimate relationships, one life at a time, around tables and working in unity with the Church,” said Matthew. They are nearly six months into their appointment and say they’ve been intentionally letting God lead them through prayer-walking, exploring what God is doing in the local area, and forming partnerships with other churches and community organisations. The local school has also invited them to assist with the social challenges that many students face.

They gather a group of eight people around a community table in either their home or a local park to walk in Christian relationship and on mission together. They are also planning to start a Schools Hub at Oran Park to create a space for a community breakfast at school for parents and students to connect and explore support for local parents, as well as building faith relationships.

“We see God working in the everyday rhythm of life to big community opportunities,” Jacqueline said. “From a gas plumber fixing our BBQ who we are now journeying with, to partnering with another large organisation for greater community impact. We are excited to see where God leads us as we daily walk in his unforced rhythm of grace.”

The south-west Sydney area also takes in The Salvation Army Macquarie Fields mission where ministry is booming. Relationships are being formed with the various groups and service providers using the Macquarie Fields building. The mission just launched a fortnightly Friday night meal in partnership with ‘We are Community’ to bring people together around a shared table.

Captain Black, said it was exciting to see a diversity of Kingdom building occurring in the one area: “Different things appeal to different people ... I think it’s good to have a variety of expressions and different responses to local needs, so we can be flexible and agile with our response to those needs.”