Lieutenant Simon Steele helped save the lives of three people in an urgent and unexpected search and rescue mission on Christmas Eve 2018.

As told to Simone Worthing

Lieutenant Simon Steele, a flying padre with The Salvation Army Outback Flying Service, was completing some paperwork when he got a call from the National Search and Rescue Council in Canberra, the main hub for this Australia-wide service.

An emergency beacon had been activated in the remote Lake Julius area, 70km north-east of Mt Isa. The local rescue helicopter was unable to assist, and Search and Rescue had heard that The Salvation Army had a helicopter and pilot stationed there.

Was he available to see if it was a false activation or whether something had happened out there?

Below, Simon tells his story:

I knew I had to respond. The helicopter was full of fuel and ready to go. I told Search and Rescue to give me 20 minutes.

They gave me the coordinates for the beacon and I rang a friend from Careflight helicopters to see if he could come with me, as another set of eyes and for his experience in rescues. He quickly drove out to meet me at the hangar.

It took us 15 minutes to get there and we quickly spotted the boat. We flew over and a man waved his arm at us.

At first, I thought he was just fishing and had perhaps run out of fuel. This happens sometimes.

I found a spot to land among the trees and we waded out to the boat not far from the bank.

This was no fishing trip. The man, in his late 50s or so, was barely conscious. He was slumped over the console of the boat, obviously in great pain, but managed to whisper that they’d had an accident. He had activated the beacon.

In the hull were two young adults – a young man who was unconscious and not responding, and a young woman covered in blood and moaning in pain.

It turns out that the older man driving the boat had been momentarily distracted by some wild pigs running along the shore and had hit a protruding tree stump. The boy, his son, had been thrown out of the boat, but he’d dragged him back into the boat, unconscious. 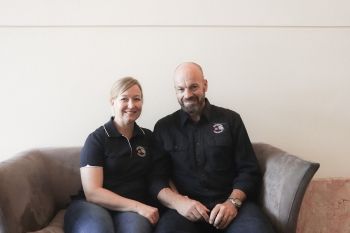 He then tried to get back to the but was disoriented and , hit more trees and eventually ran aground at speed, completely shredding the stainless steel propeller. It was like a second accident.

My colleague quickly assessed them – they needed immediate care.

I went back to the chopper, flew up to get a signal and called Canberra, saying we needed urgent medical help.

The Royal Flying Doctor Service couldn’t land their plane in this area, but I a doctor and paramedic to meet me back in Mt Isa and bring them out.

Road ambulances from Cloncurry [200km away] and a search and rescue helicopter from Cairns were also dispatched.

My colleague, Jim, stayed with the patients while I flew back to Mt Isa. A doctor and paramedic met me and we loaded the helicopter with oxygen and medical equipment.

I landed, and the doctor and paramedic assessed and treated the patients. It took three hours to get them off the boat.

The road ambulances had lost their way, so I flew off to find them and guided them to the right road. I also brought in another paramedic and extra oxygen and batteries for the medical equipment.

The doctor said that the older man, who had severe internal injuries and bleeding, would die if we didn’t get him to hospital. The boy was in a partial coma and had a brain bleed. The girl had abdominal injuries and lacerations to her head, but it was unclear how bad she really was.

The older man was loaded into the helicopter – we had to take the doors off the helicopter to get him in, and then put them back on. There was no room for a stretcher, so he was curled up in the back connected to all the machines, while the paramedic kneeled in the front, attending to him.

The boy was too critical for my helicopter as he was in an induced coma and on machines that were keeping him alive. He was taken by road ambulance to Mt Isa Hospital and then airlifted to Cairns.

The young woman was also driven out and then airlifted to Mt Isa Hospital.

I had started at , and we finished at .

All three patients were soon airlifted to Townsville and were in intensive care for over a week.

Soon after the accident, Jim told me that the boy was completely brain dead and was on life support. I prayed for him and for the others. Even though I didn’t know them, I felt an attachment to them and was impacted by the possible death of this young man.

Not long afterward, I was told that he wasn’t brain dead and that there was some hope for him after all! A few weeks after that I found out that he was people and recovering quite well.

This was really an answer to prayer.

All three patients are still in rehabilitation to varying degrees but are all recovering.

Once they are all back in Mt Isa, I plan to catch up with them and share what happened, as they won’t have any memories of it.

I want to tell them that I was praying for them, and I will pray that this plants a seed for them, the seed that God loves them and there is more to life than just what we see.

I have met up with their families, and they want to see me when the patients return.

At the time, I was a central part of the rescue operation in both flying and coordinating the response. I couldn’t believe the seriousness of the situation and how intense the emergency response was. Three people nearly dying from a boating accident was a shock to me. This was certainly one of the biggest helicopter rescues since I have been here in Mt Isa – over 10 years – and the biggest one I have been involved with.

I was thankful that I was there, that I was ready, had access to The Salvation Army helicopter, and had the resources to respond.

Three people are alive because of the service The Salvation Army provides. It was a ‘God moment’ that I was there at the time and to quickly respond.

It was a privilege to be able to respond and play a critical role in saving the lives of three people.

They have been given a second chance at life.