Salvation Army volunteers in Darwin have been busy over the weekend feeding hundreds of evacuees as people prepare to start leaving the centres.

Salvation Army Emergency Services (SAES) teams in the Northern Territory are continuing to feed and supply clothing and other necessities to people in evacuation centres in Darwin, Katherine and Tennant Creek.

Cyclone Trevor, which made landfall about 100km south-east of Port McArthur in the Gulf of Carpentaria, has now been downgraded to a tropical low and is expected to dump more than 200mm of rain in the coming days. 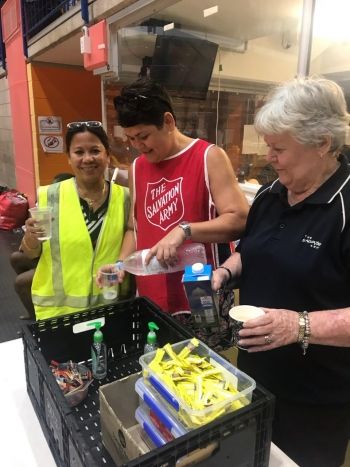 Darwin volunteers hard at work at the evacuation centre.

One SAES support team from NSW is serving in Katherine, a Queensland team is in Darwin and another NSW team from Newcastle arrived yesterday [Sunday]. The team on standby in Alice Springs has been stood down.

In Darwin, the first flights taking evacuees back to some communities not affected by the storm have begun. It is unclear at this stage how long this process will take, and how long the evacuation centres will need to remain open.

The SAES team in Darwin prepared a community barbecue on Saturday and catered for more than 300 at each meal. Over 500 meals were distributed on Sunday, as well as thousands of cups of coffee and tea, and kilos of fruit.

“Rain and strong winds have added a challenge to the efforts to safely shelter and serve all the evacuees,” said Major Kim Hawke, Darwin Corps Officer. “The teamwork is inspiring and we are all set to continue the efforts for as long as required.”

It is anticipated that, as from today, there will only be one evacuation centre operating in Darwin. 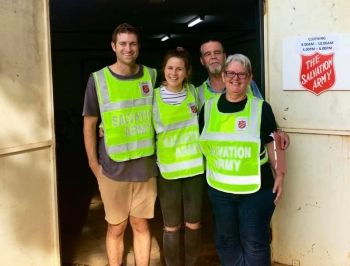 Katherine volunteers preparing for their shift.

In Tennant Creek, 500km north of Alice Springs, the SAES team has settled in.

“There are about 30 people in the evacuation centre at the moment, not including staff,” said Captain Nari McGifford, Alice Springs Social Program Network Director.

“This is potentially going to rise as the rains commence and [Cyclone] Trevor heads south.”

“The team has been working under some extreme circumstances,” said Warren Palmer, Western Australia Divisional Public Relations Secretary, who has been in the Northern Territory.

“[On Saturday night] there was an isolated storm [unrelated to the cyclone], which caused some damage to tents – there were some injuries and, due to this, we needed to drive down to Katherine to deliver some fresh clothes and towels. Our support has also been clothes and other material aid.

“All of our teams have given quality support and the organisation has been first class.”

“I arrived to find Norm [Archer] and his crew cooking up a storm and people standing in line for a mile,” she said. “We brought more supplies for the Katherine crew, including new underwear, clothes from Salvos Stores and towels. They have all since been distributed.”

It is uncertain how long it will be before some evacuees can return to their homes. Emergency services personnel are surveying the wreckage of the community and will assess when it is safe for people to return.

The Salvation Army will remain in the evacuation centres while the need remains to do so.

She left the conference early to get back to Karratha, located in the Pilbara region, and make preparations at the Family Store and corps building, as well as the quarters. With her husband, Captain David Boughton, away on furlough, she was facing her first category four cyclone alone.

She arrived in Karratha and was in the supermarket gathering supplies when the local council upgraded its warning to a ‘Yellow Alert’, meaning all shops are to shut and everyone is asked to remain in their homes or in a safe place.

“The supermarket phones starting ringing non-stop,” Captain Boughton said. “Everyone was calling to ask how long the store would remain open.

Over the weekend, Captain Boughton and the rest of Karratha bunkered down. “The sounds are incredible, winds swirling, house shaking – it’s like the ground is rumbling,” she posted on Facebook, letting her friends and family from around the country know she was still okay.

At this stage, Lynn says The Salvation Army in Karratha has not been formally asked to provide any assistance in the wake of Cyclone Veronica.

Cyclone Veronica weakened overnight to a category two cyclone, but a ‘Red Alert’ still remains in place in the Pilbara region.