Members of Tuggeranong Corps cut the official 21st anniversary cake to celebrate the ministry of the corps since its beginnings in 1998, and for all that lies ahead in the future. Photos: Roselynne Klee.

Tuggeranong Corps in Canberra’s south celebrated its 21st anniversary on the weekend of 6-7 April.

Queensland divisional leaders, Lieutenants-Colonel David and Sandra Godkin, the founding corps officers of Tuggeranong, were special guests for the weekend.

Tuggeranong Corps was founded in 1998 when, following much research on population growth in the Tuggeranong Valley and consultation with officers and members of the Canberra South (Narrabundah) and Wanniassa Corps, it was agreed to amalgamate the two corps and relocate to Tuggeranong, a rapidly growing area, which now has a population of 85,000.

Corps Officers Major Colin Maxwell and Captain Roz Edwards extended invitations to all former corps officers and cadets (who had completed out-training at the corps) to the celebration of 21 years of ministry in the Tuggeranong Valley. 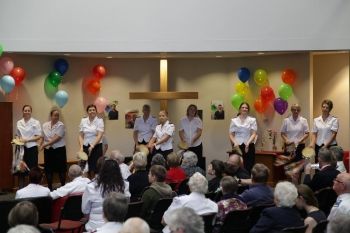 The timbrel brigade performed during the celebrations.

The celebration included a prayer breakfast on the Saturday morning followed by a high tea, attended by 200 people.

Former corps officers of Tuggeranong, including Majors David and Michele Terracini, Majors Clayton and Leanne Spence, and Major Ann Lingard, as well as previous corps members who had travelled from interstate, were recognised.

The Sunday morning service was heartfelt time of honouring God’s faithfulness over the past two decades. The band’s message, ‘In Quiet Pastures’, under the leadership of Bruce Edwards and the songsters’ message, ‘He Was There’, under Rendry Del Rosario, were meaningful contributions. The timbrel brigade, led by Roselynne Klee, performed in the prelude to the service.

The congregation enthusiastically participated in the worship team’s special presentation of uplifting worship songs, which had been sung in worship at the corps over the past two decades.

Lieut-Colonel David Godkin based his message on Philippians 3:12-14. He challenged Corps Officers Major Colin Maxwell and Captain Roz Edwards and the congregation, emphasising that Tuggeranong has not reached its goal and that God had even greater plans for the corps.  He spoke of the importance in going forward building on the foundations we have today, and that the best was still to come.

Lieut-Colonel Sandra Godkin presented songster Lorraine Zedras with a Long Service Award for 60 years of service as a songster in South Africa and Canberra. Songster leader Rendry Del Rosario and previous songster leader Albert Hile both spoke of Lorraine’s love of singing and her strong commitment to the brigade.

Tuggeranong is a thriving corps that reaches out to the community in many and varied ways. It has musical sections, many weekly cell groups for prayer and Bible study, youth and young adult activities, and a weekly gathering for over 50s called Prime Time.

The corps has an emergency services team ready to assist when and wherever required. Tuggeranong will again this year, in association with Rotary, offer safe shelter for people experiencing homelessness during the winter months.