Oasis returns to the screen Oasis returns to the screen

Owen Davis and Major Paul Moulds at the 2018 Red Shield Appeal launch, where Owen was a guest speaker.

Eleven years after the release of The Oasis, an award-winning film on youth homelessness that focused on The Salvation Army Oasis Youth Support Network in Sydney, a follow-up documentary is being released.

Life After The Oasis, produced once again by Shark Island Productions, catches up with a number of the young people who were featured in the original documentary to discover how life has been for them in the ensuing years.

The documentary also features Majors Paul and Robbin Moulds, who were the managers of Oasis 11 years ago when they held the rank of captains. Paul reconnects with a number of young people in the new film and also gives an insight into his own journey since The Oasis.

Paul says the original documentary had a huge impact on people’s perceptions and understanding of the issues that cause youth homelessness.

“We received so much support to expand our work because of the documentary and many people have asked me over the years what happened to the young people whose stories were featured,” he says.

“This new film will answer these questions. I think people will be moved and inspired and also saddened by the struggles they have continued to endure and the lost opportunities homelessness causes.

“What I love about this new documentary is the way it reinforces the message of the original one – that while professional interventions are important, it is the power of love and the importance of being connected that is vital to a person’s journey towards healing. It also beautifully illustrates the power of the human spirit to overcome and fight back from adversity.” 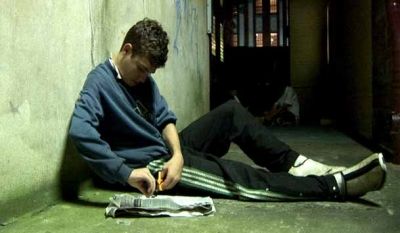 Owen Davis, then living on the streets, was featured in the original documentary.

Owen Davis is one of the original characterswho features in the sequel. Owen was a teenager when he found himself on the street. Havingnowhere to go, he slept in the disabled toilet of a train station for many weeks while continuing to attend school.

He eventually quit school because he was being bullied and became addicted to drugs. Years of juvenile detention stints followed before hestumbled across the Oasis Youth Support Network in Sydney’s Surry Hills.

“The Salvos gave me everything I needed … food in my belly, a bed to sleep in, a safe place to live. I went from feeling lost and scared to having hope!” he says. Owen also met Paul, whose patience and constant support greatly impacted Owen. “Paul loved me back to life again,” Owen says.

In the first documentary, you get a glimpse of Owen as an angry, lost teenager: “I was a bit outrageous … I was drug-addicted and I was drinking alcohol every day, so I was a bit wired all the time.”

Eleven years on and a ‘new’ Owen is seen in the second documentary. He is working with The Salvation Army on a homelessness education project called ‘Streets to Stage’, which involves the mentoring and support of young people who have experienced homelessness to share their stories in schools to raise awareness and educate young people.

“I’m more mature now,” he says. “I didn’t really have any dreams or ambitions back then … now I have my own goals and my own dreams.”

The release of The Oasis in 2008, which screened on the ABC, coincided with the release of a National Youth Commission report into youth homelessness in Australia.

It brought the issue of youth homelessness to the public’s attention and influenced the Federal Government’s White Paper, which outlined a national action plan on the issue. According to Paul, not enough action has been taken.

“The hopes and targets that had been put forward at that time of halving homelessness haven’t materialised,” Paul says. “Part of the motivation of creating this new documentary is to again raise the issue of youth homelessness and remind governments and the people of Australia there’s a lot more work to be done.” 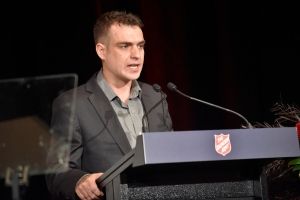 Owen speaking at the Red Shield Appeal launch in 2018.

Owen agrees: “I’m hoping it will create a lot of homeless awareness across the country and that the film will go into schools.”

Life After The Oasis will premiere at the Sydney Film Festival on 13 June at 6.30pm at Event Cinemas in George Street. Tickets can be purchased HERE (https://www.sff.org.au/program/browse/life-after-the-oasis)

It is hoped that the film will be screened nationally on free-to-air television later this year.