Hero award for our flying padre Hero award for our flying padre

Lieutenant Simon Steele responds to an urgent call for help on Christmas eve 2018 after a serious boating accident near Mount Isa.

Lieutenant Simon Steele, flying padre with The Salvation Army Outback Flying Service based in Mount Isa, was one of a group of four people who received the 2019 Royal Flying Doctor Service (RFDS) Queensland Local Hero Award.

The four were honoured last month for their quick thinking and level-headed response to a tragic Christmas eve boating accident last year that ultimately saved the lives of three people.

They had already received the RFDS Local Hero award in Mount Isa for their response to this accident and were chosen from nine recipients of Local Hero awards from around Queensland for the state award. Lieutenants Cookie and Simon Steele (3rd and 4th from left) at the awards night.

Simon and his friend Jim Lillecrapp were first on the scene of the accident at Lake Julius, 70km north-east of Mount Isa. They encountered a family of three whose boat had collided with an underwater log, resulting in serious and life-threatening injuries to three of them.

Simon, Jim and Lake Julius couple Belinda and Robert Worlein acted quickly, enabling the injured people to get treatment and be airlifted to hospital.

For the full story of the rescue, click here.

Simon accepted the award on behalf of the group at the RFDS Gala Ball in Brisbane on 27 July.

“It was a real honour to receive this award,” he said. “It really impacted me on the night, that more than 750 people had gathered for the occasion and we were part of such a big event. 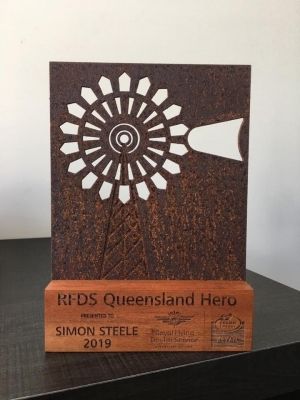 “The greatest reward for me, though, is to know that three people who easily could’ve died, are now alive. At the time, I didn’t realise just how critical the situation was. As I found out later, one of the patients probably would’ve only lived another hour had we not got him to hospital.”

Simon said the event had brought the Mount Isa community together and people were more aware of the Army’s Outback Flying Service.

“This is a good opportunity for us,” he said. “I’ve been telling people, including those we rescued, that I have faith in God, I was praying for them, that I believe miracles happened out there and God was looking after them.

“It also shows what The Salvation Army can do, and we are so blessed with the resources the Army gives us for this ministry.

“I loved flying helicopters before I came to The Salvation Army and had aimed to be a rescue pilot. I chose to do ministry, but through this, God has also given me a taste of working in the rescue field.”

As part of the award, the group was given a $7500 grant, donated by Ergon Energy Retail, to be used to improve health outcomes for their community.

They said the money would be used to assist in the delivery of mental health outreach programs to people in North West Queensland.