Striding out for justice in the Shire Striding out for justice in the Shire

Captain Rebecca Gott and her children walked the 5km route of the Big 50 event, which raises awareness and money for domestic violence services in Sydney’s Sutherland Shire. Many others (pictured behind Rebecca) dressed up for the event in a variety of costumes. Photo: Peter Gott

More than 160 people took a stroll for justice in Sydney at the weekend, stepping out for The Salvation Army’s annual ‘Big 50 Walk for the Shire’ event.

The endurance walk (50km, 25km or 5km) in the Sutherland Shire, now in its eighth year, raises awareness of domestic violence in southern Sydney and raises funds to support services that assist people impacted by the growing issue.

Sixteen-year-old Elijah Mercado, who walked the full 50km, said he did the walk to help people affected by domestic violence. “It was hard ... it took me eight hours, but walking to the finish felt great with everyone cheering, it just felt great.”

There was also a 25km walk, but many families with young children walked the 5km course, finishing at Miranda Salvation Army for a sausage sizzle and a bounce on the jumping castle (for those who still had energy!)

Brooke Beattie, dressed as Wonder Woman (pictured below right), took part in the 5km walk with a group of friends who also got dressed up for the event! “We are big dress-up people. We’ve got a great team, we just like to create fun and do meaningful things in a fun way,” she said. 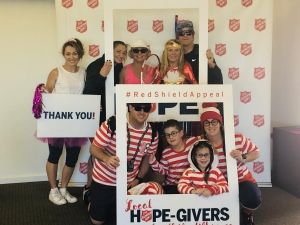 “We’re doing the walk because we feel that The Salvation Army does a lot of work and helps a lot of people and also domestic violence hits close to home for a lot of people; it’s a silent issue and anything we can do to help that is what we’re here for today.”

Miranda Corps Officer Captain Rebecca Gott said some Big 50 walkers had been doing the event since its inception in 2011. “They’re totally on board with the Salvos and the cause and they just want to make a difference. They gather their friends around them and make it fun!

“We also have some people who walk it who have lived this experience and the domestic violence journey themselves and they are so passionate to help others.” Shire Salvos (a group from Miranda and Menai Corps, as well as the Helensburgh Community of Hope) has recently secured a second property to offer transitional housing to women and children leaving violent relationships.

The first property opened in 2017 and is called Samara House, which means ‘protected by God’. Rebecca said after praying about the new property, Miranda Salvationists decided to name it Chara House.

“Chara House means joy. Our prayer would be that all who reside there would be filled with an inexpressible and glorious joy from the Lord, as it’s described in 1 Peter 1:8-9. That’s what we want them to encounter in the home and then when they leave, they can say they’ve found joy, in spite of what they’ve been through.”

Preliminary fundraising results indicate that this year’s Big 50 endurance walk raised more than $20,000; however, donations can still be made at: salvationarmy.org.au/big50