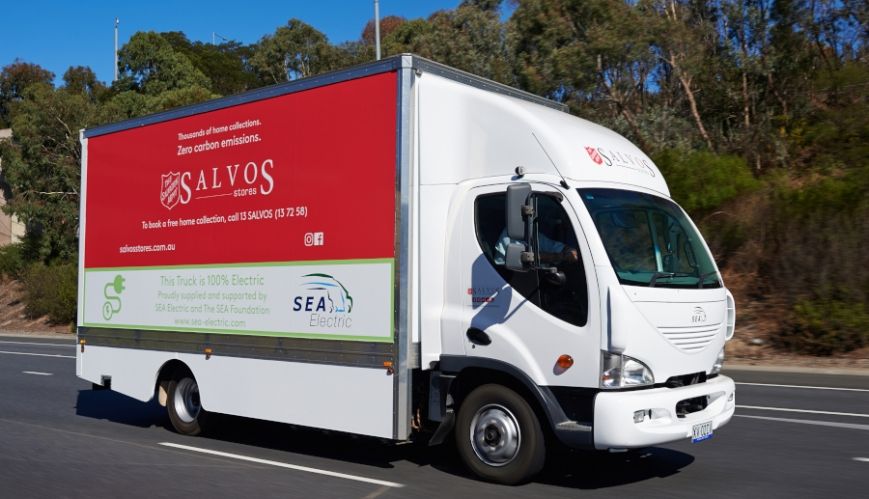 Salvos Stores is the first charity retailer in Australia to have an electric vehicle in its distribution fleet, thanks to a generous donation by Australian automotive technology company SEA Electric.

As part of SEA Electric’s philanthropic activities, the SEA Foundation has donated an electric vehicle to Salvos Stores with an estimated value of $50,000.

“The foundation was created by the shareholders of SEA Electric, which has commercialised 100 per cent electric power-system technology for the urban delivery vehicle sector,” SEA Electric Group Managing Director, Tony Fairweather said.

“In doing so, we are removing many diesel polluting vans and trucks from around the globe and replacing them with zero emission alternatives.

“We’re excited to donate this vehicle to The Salvation Army, which will assist them in their future charitable endeavours.”

Salvos Stores is focusing on minimising impact on the planet by continuously striving for new ways to reduce its footprint. Introducing the first electric vehicle into its fleet of trucks is a step to a more sustain­able future and a new way of operating a large logistics network.

“We really appreciate the generosity of SEA in providing us with this amazing electric vehicle,”said Matt Davis, National Director of Salvos Stores.

“It’s a great opportunity for Salvos Stores to be the first charity retailer with an electric vehicle in its fleet and as we focus on finding ways to continue to reduce our environmental impact, this is a big step in the right direction.

“Our corporate partners are a vital part of what we are able to do as a charity retailer and this donation opens so many doors for us to be more responsive and agile.”