Canberra Salvos have ears to listen Canberra Salvos have ears to listen

The #CBRtalks Canberra City Salvos listening project was recently launched and will continue throughout November.

You’d be hard-pressed these days to meet a Salvo standing in the street without a collection bucket in hand. Canberra City Salvos is aiming to break that stereotype with a unique listening project aimed at engaging the community without an agenda.

Newly commissioned officers Lieutenants Mitchell and Sally Stevens say they deliberately didn’t “jump into the natural rhythm” of the corps when they arrived at Canberra City in January.

“We have in some ways kind of halted that rhythm,” Sally says. “We just wanted to sit and listen and pay attention to the work that God was doing.”

Out of that prayer, listening to Jesus and getting to know the heart of their people, #CBRtalks was birthed. #CBRtalks is essentially a listening project that emulates ‘Humans of New York’, a photoblog and book of street portraits and interviews collected on the streets of New York City.

“We just wanted to, in kingdom language, ‘sit prophetically at the feet of our community’ and listen to the community, listen to our neighbours ... just hold a conversation with people,” Sally says. “We’re not trying to chase any particular conversation, we just want to be present in a very public and approachable way, and hold conversations.” 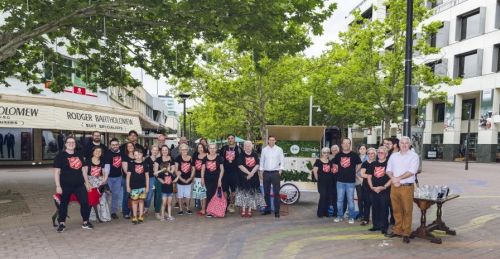 What that looks like is a funky trike and trailer parked in one of Canberra’s busiest public retail spaces, opened up and overflowing with green foliage, #CBRtalks signage, polaroid cameras and art installation.

Salvos from Canberra City, as well as other Salvation Army expressions in the capital who have been trained in the art of listening, are volunteering on shifts throughout November to hear people’s stories.

They will also have ears to hear how The Salvation Army is perceived by the public and where people believe the Army needs to be at work into the future. The initiative is funded through the Canberra City Renewal Authority and was the recipient of a Salvation Army Innovation Grant.

At a time when The Salvation Army across Australia, and the Western world, is coming to terms with the decline of traditional church models and grappling with how to engage in a relevant way with their communities, Sally says she feels like the initiative has been divinely led.

“Our key verse has been from Jeremiah 29, when, in verse 7, God instructs the Israelites in exile to seek the Shalom of the city [because] in the prosperity of the city is their prosperity.

“So, as we prayed and reflected and as the project has evolved, the posture of humility and sitting at the feet of our community and listening to our community has emerged.”

Sally says most people in the corps have jumped at the opportunity to serve the community and find new ways of being of service. Whereas in the past Salvation Army corps would regularly be seen on the streets conducting marches or open-air meetings, the #CBRtalks listening project is turning that idea of community engagement on its head by not marching in and declaring God’s presence, but simply being God’s presence alongside people.

“We have to be authentic and genuine and real in living the Kingdom life if we want people to come across it and encounter it themselves too,” Sally says. “The accountability is high when you are parking yourself on a listening space and having the community come to us [in the street] instead of the other way around, where we traditionally try and bring the community back into programs, or into buildings or into spaces. Here, we are actually wanting to work the other way around.”

#CBRtalks will run throughout November and people who engage with the listening space are encouraged to take a happy-snap with the installation’s instant cameras and have their face displayed on a polaroid picture board, contributing to an exhibition planned for the end of the month.

Throughout the month, Canberra City Salvos, Canberra Recovery Services participants and Salvos from other expressions will engage in the space in other ways. For example, a ‘Bless Day’ will involve Salvos handing out doughnuts, because “we’re trying to step away from [the idea that] ‘the community gives to us’ and do it the other way around and discover what comes from that,” Sally says.

Canberra City Salvos are excited to see what God will do during #CBRtalks or as a result of it. They’re prayerful, expectant and looking and listening for how the spirit is moving and where he will take them.