Three significant new appointments and major changes to the leadership structure of the Australia Territory have been announced by territorial leaders Commissioners Janine and Robert Donaldson.

In a letter to the territory (below), the Donaldsons have explained how the new structure will operate and who is involved in the three new appointments. A number of other appointments have also been announced and these can be found at the conclusion of the Donaldsons’ letter.

Throughout the Australia One journey, our territory has experienced extensive change on many levels.

These changes position The Salvation Army with a united voice, aligned vision, increased innovation, stronger partnerships and better stewardship for greater impact – a Salvation Army leading a fresh movement of God across Australia.

We want to thank you for your prayers, resilience and patience during this process and especially the past year.

You have heard us talk in recent months about our support for a holistic approach to our mission. For us to focus more intentionally on delivering this holistic mission, we would like to announce the following leadership changes:

Importantly, the Divisional Commanders and the Secretary for Mission remain part of the territorial leadership team.

A new role (Assistant to the Chief Secretary) with responsibility for governance has been created. Major Darren Elkington will take up this new appointment in 2020, overseeing the Governance and Risk, Enterprise Project Management Office, Internal Audit, Professional Standards and Quality and Salvation Army International Development departments.

Women’s Ministries and Gender Equity: Commissioner Janine Donaldson retains the role of Territorial President for Women’s Ministries (TPWM) and will offer her leadership of women throughout all mission delivery. The focus on our gender equity agenda will continue, with the function included in the responsibilities of TPWM.

Mission Support: The Mission Support department is being refined to be more focused on their mission resourcing. The Adults Ministry stream will resource both women and men in their Christian faith and overall wellbeing. The Diversity and Inclusion stream will support front-line mission expressions to build an inclusive culture and practice of ministry.

Following a review of our Governance and Management Forums, we would also like to announce that the Executive Mission Leadership Team (EMLT) will cease at the end of 2019. The Cabinet will transition to a Pastoral Committee commencing in 2020, to support us, as the territorial leaders, in ensuring the spiritual health of the territory.

The Executive Mission Council (EMC) will continue to support the Chief Secretary in the implementation of strategy and oversight.

The new leadership structure and appointments take effect on 1 February 2020. Please find below, for your reference, the new Territorial Executive Organisational Chart. 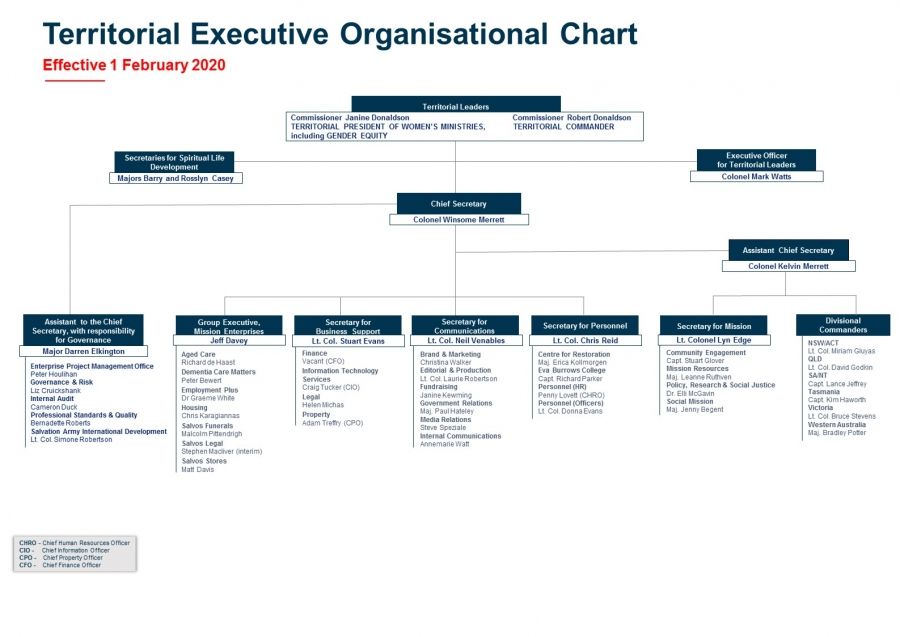 May God continue to grant wisdom, discernment and courage to his Army in these exciting days.