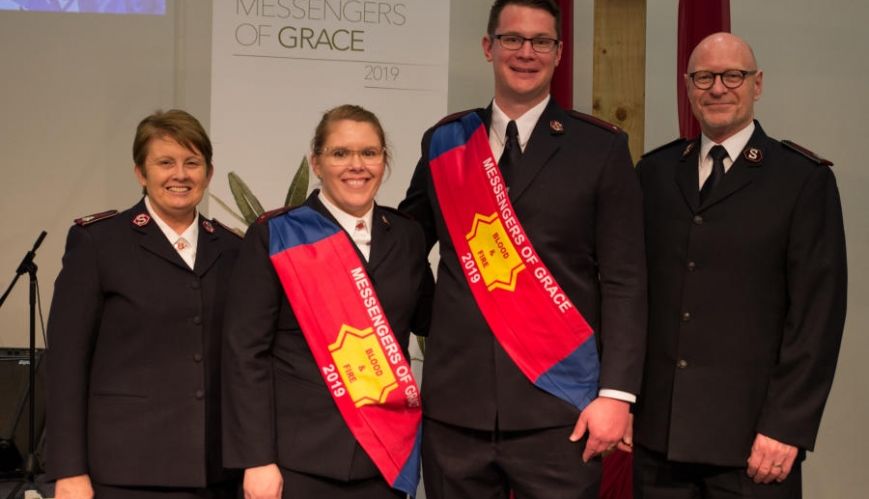 Salvation Army history was made at Sunday’s commissioning of Andrea and Daniel Wayman at Capricorn Region Corps in Rockhampton.

It was the first commissioning for the Australia Territory outside a major city centre; the event took place on the first anniversary weekend of Australia becoming one territory; and the Waymans were the first cadets of any Messengers of Grace session around The Salvation Army world to be commissioned. Lieuts Andrea and Daniel Wayman, with their four children.

Commissioner Robert Donaldson and Colonel Julie Campbell led a sacred, yet relational and relaxed commissioning, which was part of the weekly Sunday service at the corps.

“It is a thrill and privilege to be here with you at the territory’s first regional commissioning,” Commissioner Donaldson, the Territorial Commander, told the congregation. “You have had so much influence on Andrea and Daniel, have nurtured, prayed for and encouraged them, and played a significant role in forming them as disciples and leaders.”

Andrea and Daniel met and grew up at (then) Rockhampton Temple Corps. They were the first couple to be married at the new Capricorn Region Corps, became territorial envoys there, and their four children were dedicated there.

After their commissioning, Andrea and Daniel gave a joint testimony, thanking family, their children, friends, the corps, and Salvation Army leaders for their influence, guidance, trust and support.

“Without a doubt we know we are where we’re meant to be,” Andrea said. “We have laid bare our life for God to use and pray we will always be worthy of that calling, that we will acknowledge him in all we do, and that it will always be for his glory.”

Colonel Campbell gave the message, focusing on the mission of The Salvation Army to share the love of Jesus. 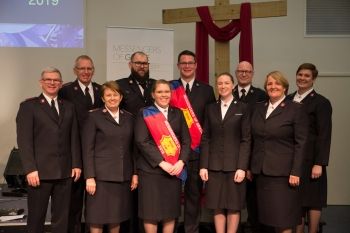 “Andrea and Daniel are part of the Messengers of Grace session of cadets, but Jesus instructed and commissioned us all to be messengers of his grace, to share the good news of his unconditional and undeserved love and salvation, and to make a difference wherever we are,” she said.

The Waymans will take up their first appointment as Corps Officers at Mount Barker, South Australia, in January.

The decision to hold the weekend commissioning events in two locations heralds a new direction for the Australia Territory with regard to what is a significant date on The Salvation Army calendar.

Captain Richard Parker, Leader of Officer Formation at Eva Burrows College, explained that going forward, Covenant Day for all cadets will still be held at the Ringwood (Melbourne) campus of the training college, with a second, public service to be hosted by a local corps in Melbourne.

“Cadets will then return to their home states for commissioning, where the Silver Star recognition will also be part of proceedings,” he said.

“Commissioning services will either be capital-city based or in some cases, corps-based. This will enable each state to celebrate with their cadets and widen the commissioning experience across the country.”